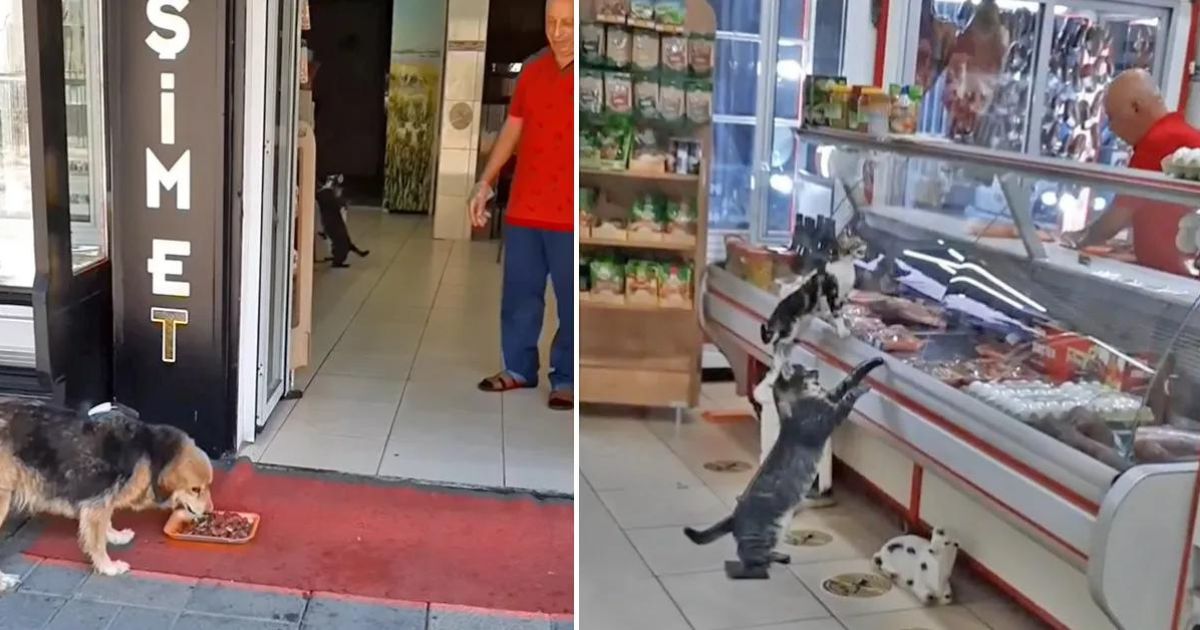 Ikram Korkmazer is a 51-year-old businessman whose adoration for animals made him do incredible things.

Ikram’s heart goes out to stray animals. He is aware of their daily difficulties looking for food to eat. So what he does is he gives them meat leftovers whenever they pass by his meat shop.

He knew he had to do something.

It all began when a cat that appeared to be hungry entered his shop. She climbed the counter, drooling over the meat in front of her.

Korkmazer gave the defenseless cat some leftover meat since he felt bad for her. He fell in love with the cat right away, and fortunately, it wasn’t their only encounter. Yesim the cat continued to visit Korkmazer’s store for food, and she even brought her newborn kitten.

He couldn’t resist them every time.

“She would stand on two legs, look at the meat on the counter, and ask for meat. She started to come to ask for food five or six times a day, standing on two legs,” the man recalled. “She wanted mostly spleen, heart, kidney, and loved beef.”

Her kitty continued to visit the meat shop for snacks after Yesim passed away. Because of Korkmazer’s love for Yesim, he actually named his shop after her.

He named it the Yesim Meat Gallery.

Today, Yesim Meat Gallery is renowned for its fresh, delectable meat, as well as for being a store that feeds and cares for stray animals.

The sweet ritual didn’t end with Yesim and her kitty. The generosity of the butcher store owner seems to have reached other stray cats and even stray canines as well.

He’s got a big heart.

When Korkmazer’s videos went viral on social media, his good act eventually gained recognition all over the world. He began filming the animals he was feeding, then uploading the clips on Instagram and TikTok.

The videos started to gain attention.

His passion for animals astounded many people, and as a result, he amassed thousands of followers on both social networking sites.

“I have instilled the love for animals in this world and it makes me proud to introduce Turkey as an animal-loving country,” the meat shop owner remarked.

His advocacy has inspired others.

Although his quick popularity has attracted detractors, Korkmazer is more interested in the supportive responses he has been receiving.

As he pursues his goal of helping stray animals, he is pleased to serve as an inspiration to many others. In fact, his relatives and coworkers have begun to assist with feeding stray cats and dogs that come into his meat shop.

His simple act of kindness created a ripple effect of more people helping countless poor stray animals all over the world. Way to go, Korkmazer!

Check out the video below to witness Korkmazer feeding stray cats.

The bear brought its cub to the girl so that she pulled the splinter out of its paw
This story happened in the summer. It was warm and
0 185

Elephants freed from concrete pit after 20 years step into grass for very first time
When you think of elephants, you think of massive creature
0 74