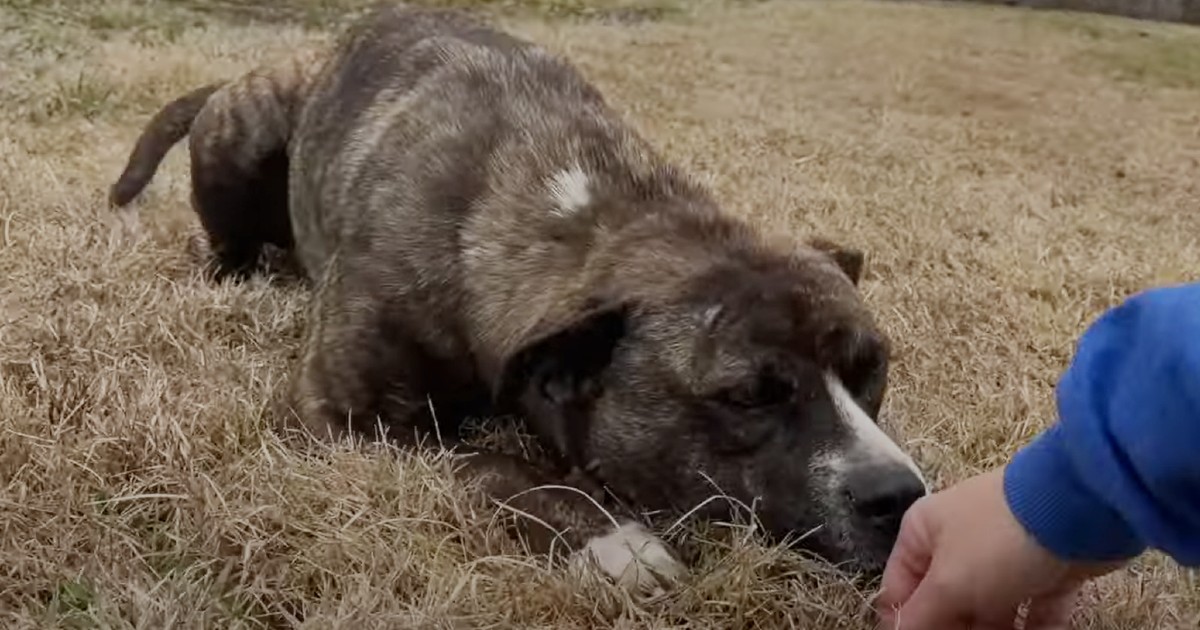 It was raining that day in St. Louis, Missouri. And when it stopped, they saw this sweet dog all by herself on the side of the road.

The rescuers from Stray Rescue of St. Louis stopped the car and did what they could do to encourage the dog to cross the road toward them.

She was wary at first but she did cross the road eventually.

“It’s a very soggy St. Patrick’s Day here in St. Louis today. In between downpours, we happened upon this angel. She seems to be straight from heaven. But the streets are hard for a trusting dog. She has scars all over her head and looks like she’s had many litters during her life. The way she crawled over,” Stray Rescue wrote in the caption.

However, instead of going straight to them, she went straight toward a vacant field, most likely sizing up the two rescuers. She didn’t know yet if she could trust them.

But the rescuers knew this so they didn’t force her to go to them.

Instead, they held out their hand and reassured her with soothing voices that they weren’t going to harm her.

She crouched down and crawled toward them, seemingly tired of not trusting people anymore. The soothing voices worked to reassure her that she was going to be in good hands with them.

The rescuers held out her hand for her to sniff. And when the dog didn’t back away or growl, the rescuer stroked her head and showed her as much love as she could with her caress.

Slowly, inch by inch, the dog came closer and closer to her.

With each caress, the dog began to trust the rescuer more and more. The rescuer even called her companion to give the dog more love.

She basked in all the love given to her by the rescuers.

Because they believed she was abandoned and had been wandering the streets for some time, they gave her some food to nourish her. Soon after, when the dog already trusted them, they put a leash on her and took her to their car.

The dog was grateful to finally be rescued.

She was so grateful that they captured a photo of her laying her head on the rescuer’s shoulder.

Their shelter at Stray Rescue was already full, but they weren’t going to leave this poor, sweet dog alone in the rainy streets of St. Louis. They used their voice to call for a foster parent so she can live in a loving home before her forever home.

She deserved to live in a home full of love after what seemed like a life of breeding from the day she could get pregnant. The rescuers guessed that she was probably abandoned when she got no longer get pregnant.

Watch how this dog was able to trust the rescuers in the video below.