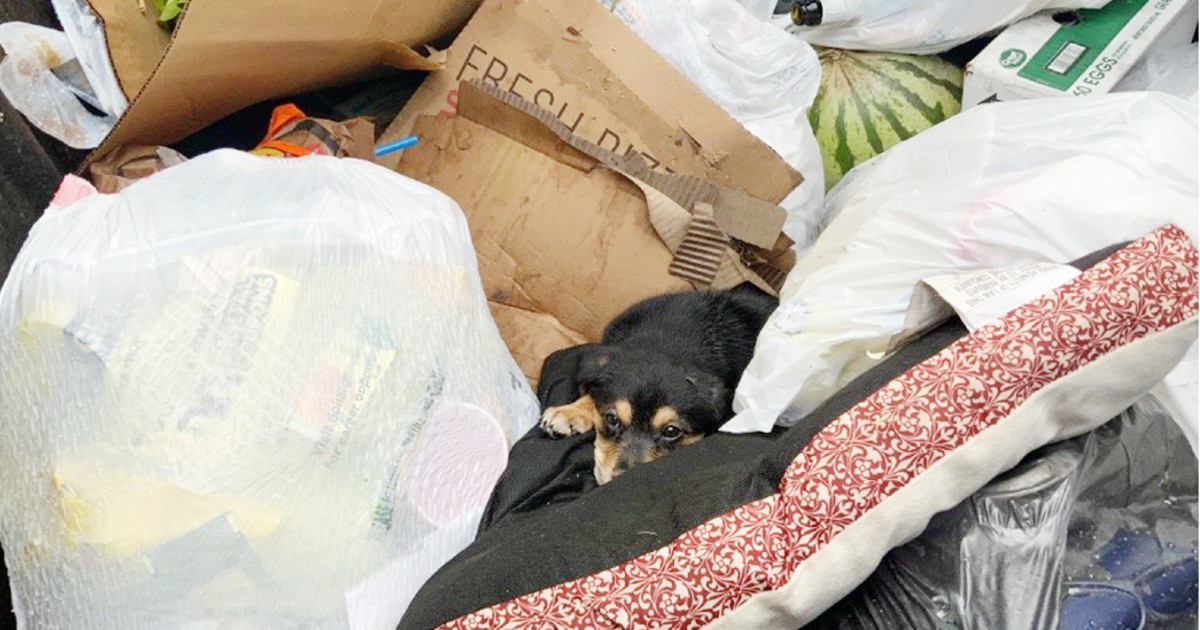 When most of us look at puppies, their adorable faces remind us of the beauty in all living things.

But not everyone feels that way.

Apparently, someone in Spartanburg, South Carolina, felt the innocent creature was a burden and something to be discarded.

But a community of people felt otherwise and worked together to rescue a puppy abandoned in an apartment building’s dumpster.

The sweet little pup was found on his dog bed in the dumpster, which was surrounded by bags of trash and loose refuse.

Spartanburg environmental officers rushed to the scene to rescue the black and tan shepherd/hound dog mix after being tipped off by a Good Samaritan.

Spartanburg County Environmental Enforcement called the Greenville Humane Society to see if they could foster the puppy and find it a good home.

“We got a call asking if we would be willing to take him,” Rachel Delport, Greenville Humane Society chief executive officer, told The Dodo. “And of course, we said yes. It’s sad to see people who don’t take the necessary steps to treat animals the way they need to be treated.”

The rescue could have completely been avoided if the dog’s owners just left him at the humane society in the first place.

They either couldn’t have been bothered to do so or feared being judged for surrendering their dog. Either way, it was a horrible decision.

“He was probably just a little underfed and maybe needed some TLC and fluids,” Delport told FOX Carolina. “Coming into our care, he’s been doing well. He’s obviously gotten some treats and some food and he’s just happy to be where he is.”

The puppy, who was only six or seven weeks old, was very affectionate and thrilled to be with kind people who cared about him.

“Once he got here, he was very ready for some cuddles,” Delport said. “He got lots of toys and attention.”

The folks at the Greenville Humane Society wanted to make sure that Coleman was adopted into the very best home.

“We hope someone will come to foster him soon as he deserves nothing more than to be cuddled and cared for in a loving home,” said a shelter spokesperson.

So, they set up a fancy photo shoot for him for his adoption ad photos.

The Greenville Humane Society is confident that Coleman will quickly find a loving forever home.

“There’s been a lot of interest, a lot of people calling asking how he’s doing,” Delport said. “The community is rooting for him and wants the best for him.”

Anyone with information about the dumpster incident is being asked to reach out to Spartanburg County Environmental Enforcement at (864) 596-3582.

In the meantime, Coleman is very happy and doing very well in his foster home. Learn more about his story in the video below.

Golden retriever learns he’s getting a baby brother
Family is the most important thing in the world.
0 285