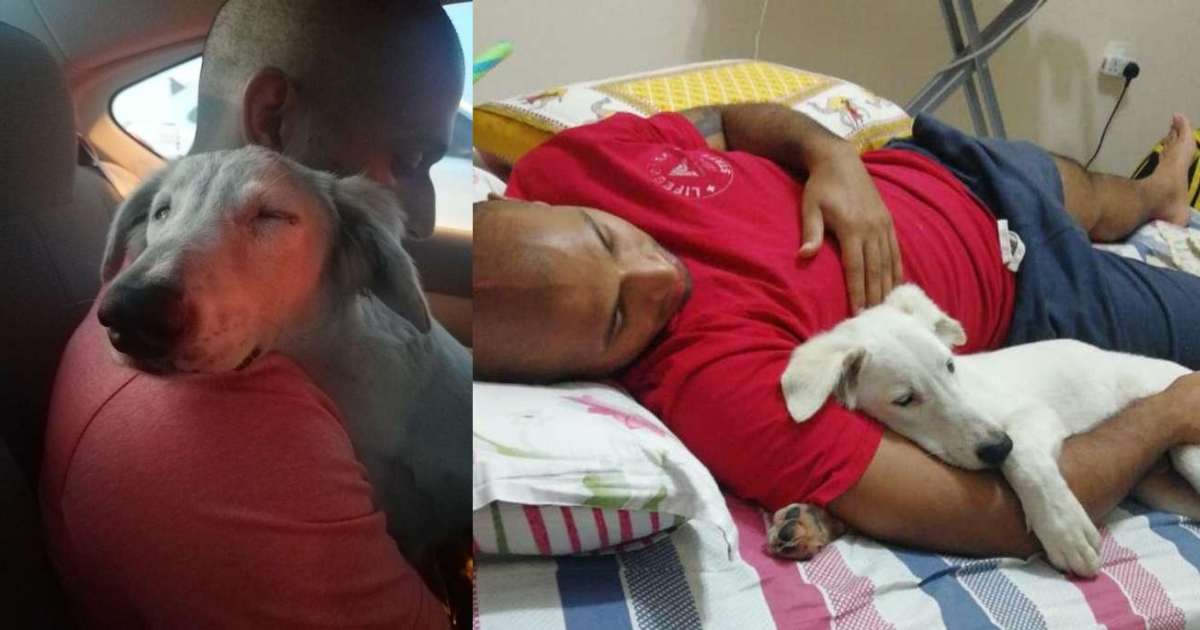 Many animals living out on the streets have been through trauma that we couldn’t even imagine, so it’s natural for them to be hesitant of us humans – even those with the best intentions who want to rescue them. So when one man came across an abandoned dog an a parking lot in Dubai, what he didn’t expect was for the sweet dog to run up and greet him like an old friend.

Although he hadn’t been expecting to save a life that day, the man instantly fell in love with the pooch and ended up bringing him home with him to live in his house. He shared his story on Instagram along with some adorable pictures, and we can’t get over this dog’s amazing transformation!

Anand Raman was visiting his sister at work when he spotted a dirty young dog in a parking lot outside of his sister’s office. It was a swelteringly hot day, and the dog was trying to seek shade underneath a parked car to cool off.

“He was under a car eating scraps some of her workers had left for him,” Raman told The Dodo. “His fur was matted and his legs weren’t quite right.”

Despite being in such a bad way, the dog was still determined to give some love to Raman, and he immediately left the shade of the car and walked up to the man, with his tail wagging and a big smile on his face.

“He approached me with a curious but excited disposition, wagging his tail excitedly,” Raman recalled. “This demeanor of his is what initially made me fall in love with him.” He added, “We then sat there for a while on the sidewalk and he was content just receiving pets from me for a while. I carried him into the car and he immediately fell asleep on my shoulder.”

The little dog had known Raman for less than five minutes, but he already knew that this was a person he could trust. With the help of his sister and brother-in-law, Raman was able to take the dog straight to the vets where he could be checked over.

“He was exhausted when I first got him, which is why he fell asleep right away in the car ride to the hospital,” Raman said.

The vet was soon able to discover why the dog was so unsteady on his feet.

Apparently, the poor little guy had rickets in both of his front legs due to malnutrition. Thankfully, it is a disease that dogs can fully heal from and doesn’t cause any lifelong complications. The little dog was finally on the road to recovery.

The first thing Raman did upon arriving home was give the dog his very first bath in what could have been forever – and he was surprised at what was underneath the dog’s dirty fur!

“He was so dirty I thought his fur color was actually black, but after a shower found out hes the complete opposite,” Raman said on Instagram.

The dog was actually pure white, and his beautiful fur prompted Raman to name him Snowy.

It took a while for Snowy to relax and settle into life with an owner, and the devastating effects of abandonment could be seen in the poor dog’s anxiety and trust issues.

“Getting him adapted to a house at first wasn’t easy,” Raman explained. “He wasn’t sure where to go and what to explore, so he’d just sit in a corner. When I would take him for walks, he was constantly terrified that I was going to leave him back on the streets, so he would yank his leash away from me and run back into the parking lot of our building complex. This happened for a while until he realized we were not going to let him go anywhere fast.”

Luckily, after two months of consistent love and affection from Raman, Snowy is finally able to trust his owner.

“He sleeps and waits for us to get home from work, which is when he showers us with love and we reciprocate the same with him,” Raman said. “He also gels amazingly well with any dog he comes across and is very well-behaved with kids and guests.”

What an amazing transformation! We need more people like Raman in the world.