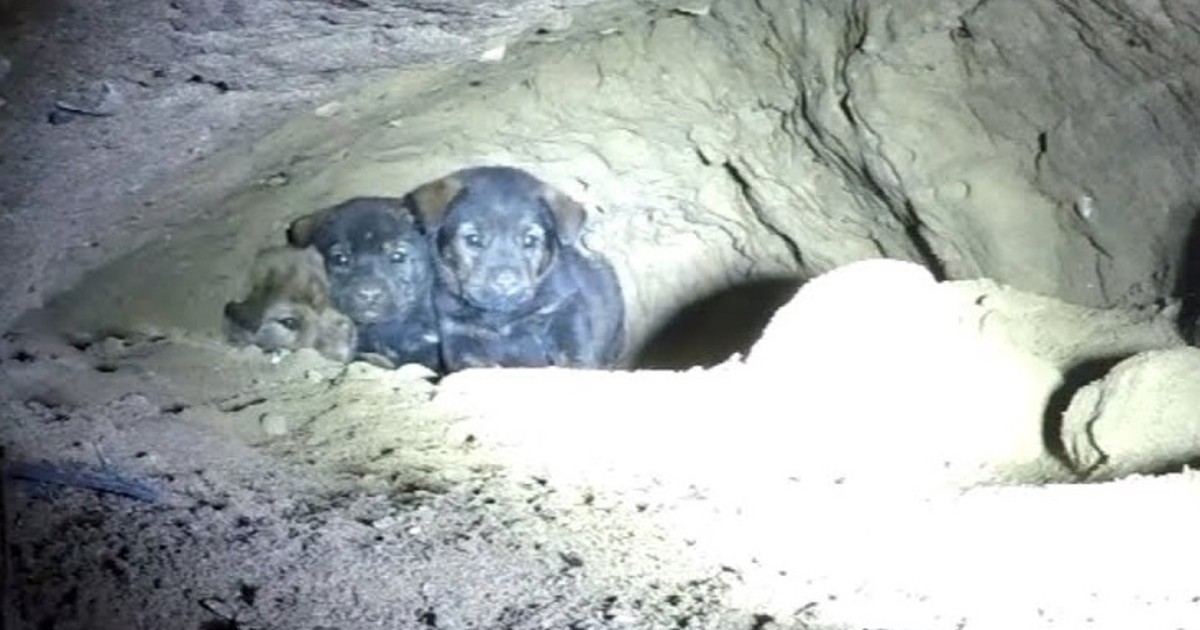 One of the group’s most daring rescues was of nine puppies trapped in a cave underground near the railroad tracks.

The organization heard about these puppies from a group of good samaritans. These kind people often brought food for three stray female dogs who lived by the railroad tracks.

One day, one of the people who looked after the dogs heard high-pitched cries.

The person looked around, trying to figure out who was making these cries. Then, they finally realized they were coming from a deep hole near the railroad tracks.

The good Samaritan peeked into the hole and saw nine terrified puppies huddled together.

The person who found the puppies immediately called Hope for Paws, who were known for responding quickly to animals in need. Because of that, the good Samaritan was surprised when Hope for Paws didn’t respond for a few hours.

Later, the good Samaritan learned why the organization hadn’t responded: they had been at a funeral for one of Hope for Paws’ animal rescuers, Lisa M. Ashe.

Ashe had worked with Hope for Paws for many years, saving animals from precarious situations. Her favorite rescues, though, involved puppies. Rescuing puppies in need was her true passion.

Sadly, Ashe was diagnosed with cancer, and after a long battle with the disease, she passed away. The Hope for Paws team was devastated to lose her.

After the funeral, Hope for Paws founder, Eldad Hagar, checked his phone and saw the message about the puppies trapped in a cave.

Hagar and his team immediately jumped into their car and headed over—they would rescue these puppies in Ashe’s memory.

When the team got to the cave, they realized how tough this rescue was going to be. The puppies had never spent time with humans before, and they didn’t understand that the rescuers wanted to help them. When the rescuers tried to reach for the puppies, they ran farther into the cave.

Hagar tried using a cheeseburger, the only food they had, to lure the puppies out.

They were able to get one puppy out this way, but when Hagar grabbed him he yelped, scaring the other puppies and sending them running farther into the cave.

Hagar had no choice but to climb into the cave to save the other eight puppies.

Hagar was able to grab three puppies quickly, but the rest of the puppies ran farther into the cave, forcing Hagar to crawl in.

He described what happened next to The Dodo:

“I crawled in 6 feet and then there’s a left turn that leads to a larger chamber. I was able to get three but then the rest were in that chamber and they were so deep. Because the turn was so sharp I couldn’t get any equipment back there.”

Hagar didn’t want to leave the other five puppies behind, so he grabbed a shovel and started digging:

“It took hours and hours because we had to go slow and try not to shake the earth. At the end of the rescue I was almost deaf in one ear from all the dirt falling into it. Every time a train went by you could feel the whole ground shaking. It was a pretty scary experience.”

Hagar and his team were able to rescue all nine puppies and bring them back to their rescue center. It was an incredibly difficult rescue, but it all paid off when the scared puppies turned into happy animals who love people. What a great ending.

Parents of 12 working multiple jobs to support their family get Christmas miracle from stranger
What do you want to get from your Secret Santa?
0 806