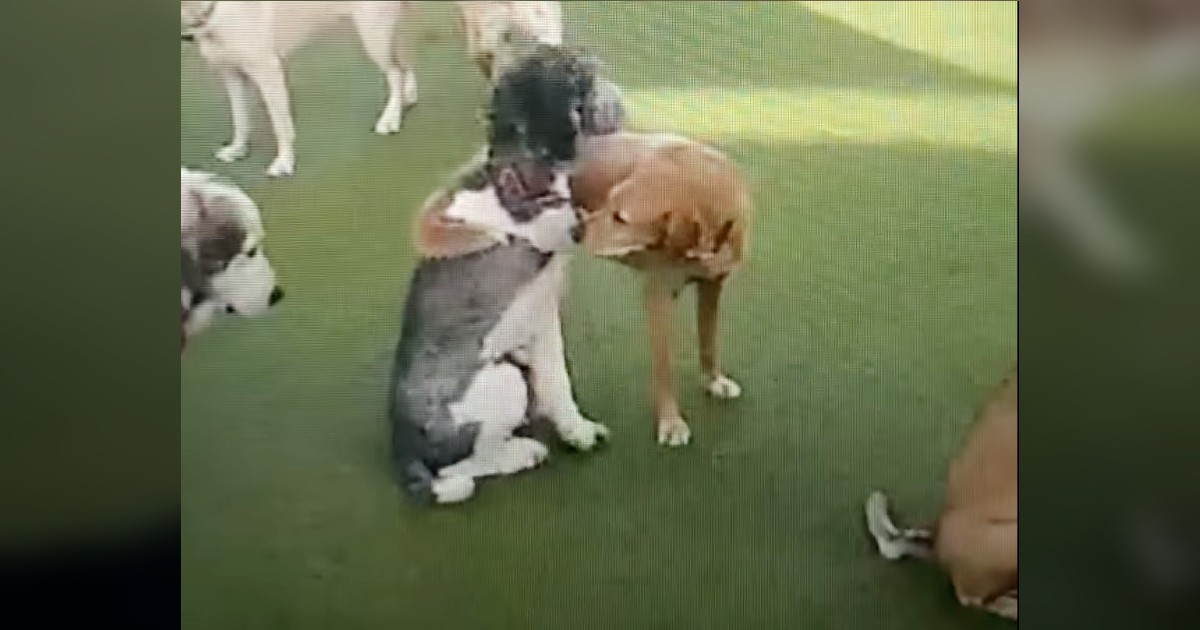 A dog will see you as a member of its family in the same way that you regard it as a member of yours. They become used to you being around them as they age and learn to know you.

For this reason, dogs do not react well to people who appear to be a threat to their family, humans, and other animals alike. Dogs’ wolf ancestry and years of breeding have made them protective, so they have an innate sense of when someone they love needs help.

Dogs are truly the sweetest.

In a particular video, proof of this protective nature was caught on camera. A dog named Romi went to the daycare with her sister Rhona.

The daycare was jam-packed with canines and the camera captured Romi wrapping himself around Rhona so that she remains safe from all the other dogs.

She was determined to protect her sibling.

“I just happened to see them on the camera,” their human shared. “And Romi wrapped herself around Rhona to protect her from getting knocked over.”

What makes the whole scene even more heartwarming is that Rhona actually has a disability. Her right front leg was not “working” when she was adopted, so she underwent surgery to have it amputated.

This is why Romi was being protective.

She must’ve understood that her sister has a missing leg, which is why she was set to protect her no matter what. The bond between the two is indeed so special.

The first time the two dogs met, they had a play date in a park. The duo instantly clicked. Although Rhona was a bit nervous, she eventually warmed up and even began cuddling with Romi.

They were meant to be sisters.

Then, Rhona was finally taken to her forever home. Her disability didn’t stop her new family from adoring her. In fact, they’re determined to make her life better.

“Really, the biggest moment was next morning. She woke up and it was like a kid on Christmas,” her fur mom recalled. “It was like, ‘This is my new family!’ She was so excited.”

Rhona was excited to finally have a home.

The video shows how ecstatic she was being around Romi. She was running and jumping around, obviously having the time of her life.

“Because the whole world had kind of shut down, the dogs hadn’t gotten to socialize with other dogs and it’s just the two of them. We’re just gonna go drop them off at daycare to go socialize and play,” she remarked.

According to her, Romi isn’t exactly very protective at home. I’m guessing it’s because she finds no threat to protect her sister from. But in the daycare, she was quick to step up to make sure that Rhona was safe and sound.

The family has come to adore Rhona so much that they adopted another dog with a missing leg. Now, they’re all living their best lives going on adventures with their family.

Check out the video below to witness Romi protecting Rhona.