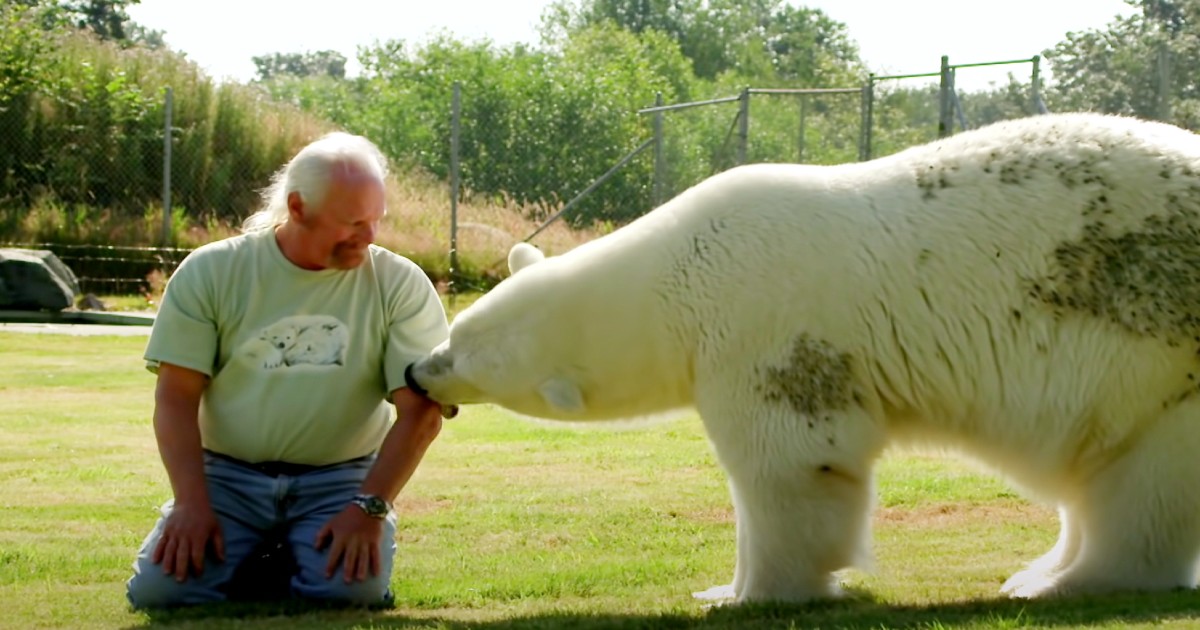 Relationships between domesticated animals like cats or dogs and humans are normal and expected.

A special bond between a polar bear and a man is not.

After all, male polar bears are 1,500 pounds when full-grown, while female polar bears weigh in at about 1,000 pounds. These are not exactly the type of animals you can keep in your backyard.

These statistics are partly why the close relationship between polar bear Agee and Mark Dumas is unique and rarely seen between wild animals and humans.

Their bond began 18 years ago.

Dumas is an animal trainer for films, and he was tasked to look for a polar bear for a movie.

He heard about an eight-week-old polar bear being hand-reared at a zoo. The cub’s mom was an older bear who had given birth to 10 cubs before her and could no longer care for this cub properly.

This cub is Agee.

Dumas took over caring for Agee and successfully trained her for the movie. No one expected the close bond Dumas and Agee would form with each other.

“It’s my job, and it’s what I had to do, and then as I’m doing it, I became very, very attached to her,” Dumas told Animal Planet.

Dumas and Agee have an extraordinary bond; he is the only person in the world who has this type of relationship with a polar bear.

“I love her a lot. I can’t say she loves me, but she really is bonded to me,” he shared.

Agee and Dumas have a wonderful relationship that he said he would never change for anything.

They also shared that Agee can get aggressive when people begin to take Dumas’s attention away from Agee. However, Dawn said that the polar bear doesn’t mind her because she is used to Dawn’s voice.

Today, Dumas is still Agee’s primary guardian, provider, and playmate. During the interview, Agee and Dumas showed off their relationship.

It is obvious how close they are to each other and how much they care for one another.

Dumas said that he has never felt in danger around Agee.

“Agee sees him as her mother and father together, really. And companion.” Dawn said, talking about her husband’s special bond with Agee.

When Dumas and Agee are together, Agee makes a sound almost like a cat purring.

Dawn said that it’s because Agee is super content when she’s with Dumas.

You’ll hear her purring in the video, and it almost sounds like a soft engine running.

While some people might question why a fully-grown polar bear is not out in the wild, one thing is for sure – Dumas and Agee have an unbreakable bond.

Dumas loved Agee, and as much as animals can love humans, Agee loves him back.

After all, he raised and cared for her since she was a cub. And this makes them part of each other’s family, with a special bond that no one can break.

Watch the unique relationship between Mark and polar bear Agee below!

In a rare public appearance with his girlfriend Alexandra Grant, Keanu Reeves appears positively radiant.
Actor Keanu Reeves has long been considered to be a
0 116