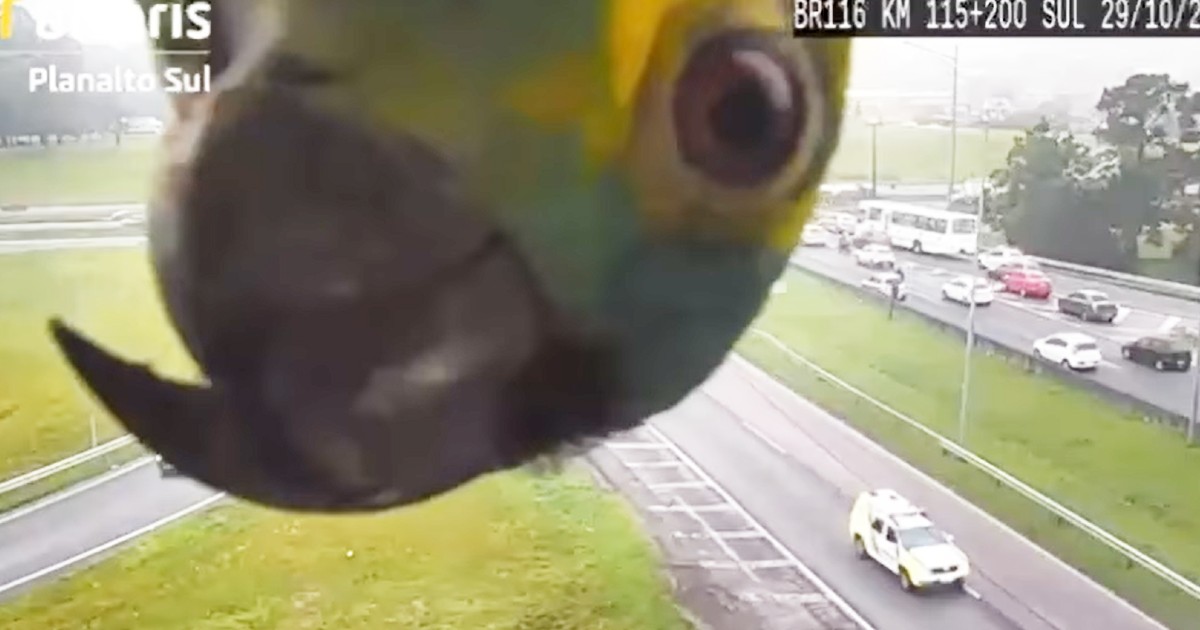 Nowadays, we have cameras that keep a close eye on traffic on major roadways. But that’s not all they’re keeping an eye on.

Sometimes they catch entities other than cars and trucks. A traffic camera in Curitiba, Brazil, got a visit from a turquoise-front Amazon.

The parrot was seen peeking its head into the camera over a city street.

The upside-down bird’s head hilariously comes into view from the top of the screen.

Highway management company Arteris Planalto Sul got a kick out of the video and posted it on Twitter.

“This morning we received a very special visit in one of the cameras of our CCTV circuit at km 115 of BR-116/PR in Curibita. The species was identified as a parrot – scientific name Amazon aestiva. Just watching,” they tweeted.

Their feed is often really boring with vehicles cruising along each day.

But that day was different. That day they had a happy little face to give them a good chuckle.

The video ended up being viewed more than 293,000 times on Twitter.

“What a beautiful thing,” wrote one commenter.

“Haha, that was good,” said another.

“Playful parrot! LOL,” and another.

The video of the bird went viral around the world and was even featured on “Good Morning America.”

The turquoise-fronted amazon, also known as the Amazona aestiva, is a larger parrot that is frequently encountered in woodlands, savannas, and open areas in South America, according to eBird. Specifically in Brazil, Paraguay, Bolivia, and northern Argentina.

Their bodies are a brilliant green color.

Their foreheads are blue and they appear to have a yellow crown.

“The amount of yellow on the head varies between individuals and regions; some having mostly yellow faces. The amount of red or yellow on the shoulders also varies. In-flight shows large red patches on the inner wings,” the website states.

The turquoise-fronted amazon is one of the most common parrot species to be kept in captivity or as a pet or companion bird.

“The turquoise-fronted amazon was one of the many species originally described by Linnaeus in his 18th-century work, 10th edition of Systema Naturae. Its specific epithet is the feminine form of the Latin adjective aestivus, “of the summer,’” Animals Wiki explains.

These parrots are known to live between 50 to 60 years and have a wide range of different “whistles, shrieks, and yapping help notes.”

Turquoise-fronted amazons are reported among the parrot populations that are decreasing and listed by the International Union for Conservation of Nature as “near threatened.”

You can check out the colorful bird and his hilarious debut CCTV appearance in the video below.