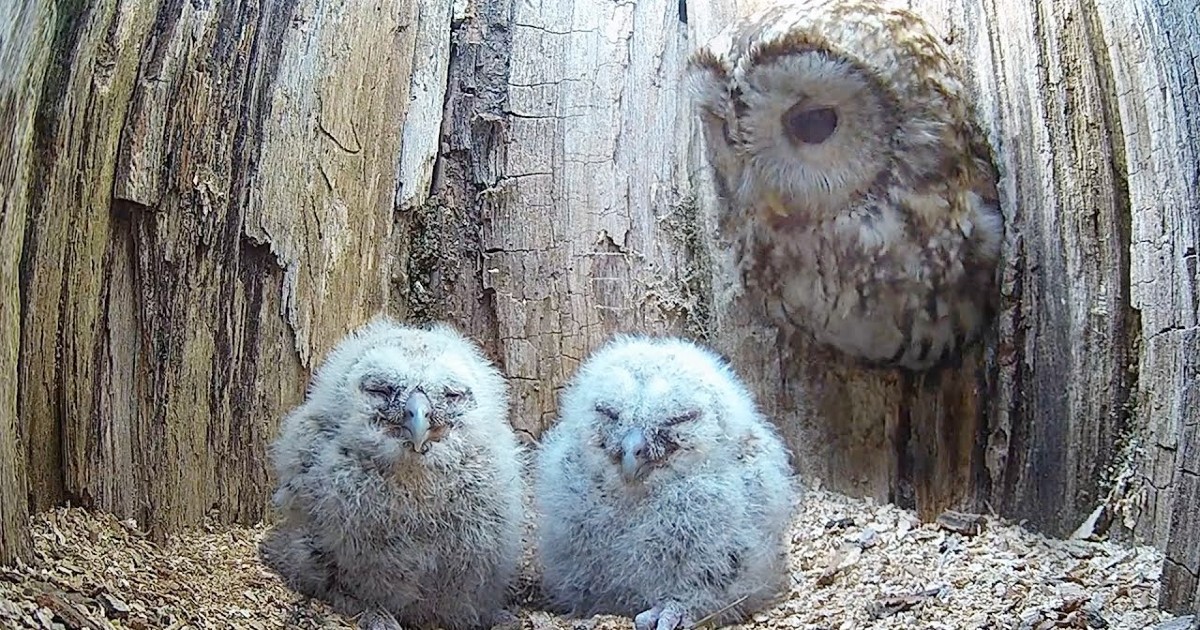 Robert E. Fuller is a British wildlife photographer and artist based in Thixendale, North Yorkshire, UK.

To create his art, he builds habits to lure wildlife into his garden so he can study their behavior via nest cameras.

Monitoring their behavior helps him to make his paintings and other creative projects. Fuller also rescues animals, including orphaned or lost owlets, a.k.a. baby owls.

“I regularly place orphaned or lost owlets into tawny owl nests and these birds accept the young chicks as their own. Their urge to protect and nurture is strong,” Fuller explains in a caption of one of his YouTube videos.

One of the tawny owls that Fuller has playing the role of adoptive mom is named Luna.

Luna was actually a rescued owl herself.

She was taken in by owls at Fuller’s place in 2017 and raised as their own.

Because of their care and protection, Luna grew to be a healthy adult owl who wanted to be a mother to her own owls.

Luna worked towards being a mom for two years, but her eggs didn’t end up hatching.

She also lost an entire batch of eggs in the previous year.

But thankfully, Luna still had the chance to become a mom. Fuller came across two other owlets who were in need of a mother.

He knew that placing the babies with Luna would help her to fulfill her motherly instincts and give them a chance at survival. So, Fuller placed the two owlets inside Luna’s nest and waited for her to come back.

He was hoping that she would accept the babies as her own and raise them.

Thankfully, Luna immediately took to the two little babies. Luna lunged into her tree hole after peeking her head in and spotting the two babies.

She hurried on over to them and placed the babies under her wings and got right to covering them up to make sure they were warm and protected.

Fuller was overjoyed to see that these two little babies have a new mom.

He was also thrilled for Luna.

“This means that after a long wait, Luna the tawny owl is finally a mum,” Fuller wrote.

Luna’s partner, Bomber, also welcomed the owlets into their home.

“The first time Bomber the tawny owl discovers the two rescued chicks I placed in the nest he seems very excited. But Luna seems a little protective and doesn’t let him too close just yet. She lets him have a quick look then guides him out of their nest with a firm claw on his leg as if to say, now go and get them some food,” Fuller remarked.

Thanks to mom and dad’s new roles, the babies are doing well and should be able to head back out into the wild on their own soon.

Check out Luna’s reaction to being a new mom in the video below.