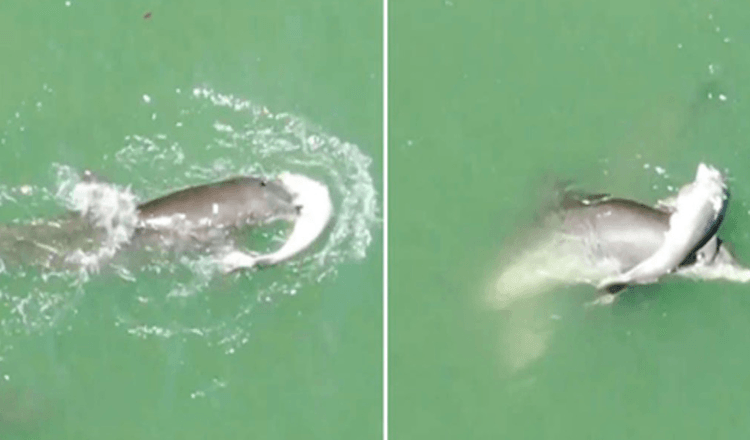 Michael McCarthy has been on a cano. Near St. Petersburg, Florida you can find the Intracoastal Waterway. He saw there the familiar silver flash of light in the water ahead. A dolphin swam nearby, appearing to cradle a small, limp body. 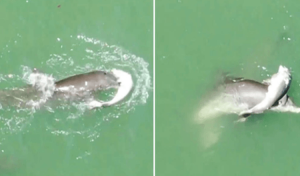 McCarthy thought at first that the dolphin caught her dinner. As he watched a heartbreaking scene developed in front of him. 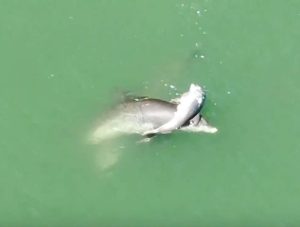 McCarthy, who owns See Through Canoe Company, told The Dodo: ,,It took me a moment to accept what I saw when I spotted the dolphin. I wanted to think it was a big dolphin or something, but it quickly became clear that it was a dead calf.” McCarthy took out his camera and began filming the dolphin’s funeral procession.
,,She crawled over the calf’s body and caressed it in a dance of grief. Fortunately, she was not alone. Another dolphin swam beside her, apparently to protect and comfort her friend. As the mother swam north across the Intracoastal Waterway, other dolphins joined her for short stretches and then continued on their way. Except for one dolphin, who stayed with her mother the entire time.’’ McCarthy reported. 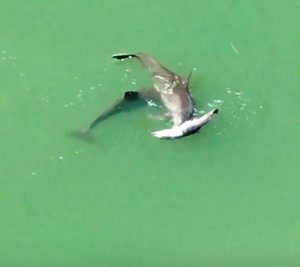 ,,It seems the calf was the victim of a collision with a motorboat.” McCarthy has seen that all too often. ,,Judging by the scars on his calf, he was probably hit by a boat propeller. I’ve spent a lot of time in the water. Especially around manatees and dolphins. Unfortunately I know what propeller injuries look like.” That set McCarthy even more on to film the dolphin’s pain to help raise awareness about a problem. He reported: ,,I see that all the time. A usual misapprehension among boaters is that dolphins are too quick to get hit. Calves are even more unsafe because they don’t swim really fast. They have to surface much more often to catch their breath.” Previous studies show that whales and dolphins exhibit mourning behaviour, especially mothers who mourn their dead calves. McCarthy posted the video on Twitter last week. It has since 76,000 views. 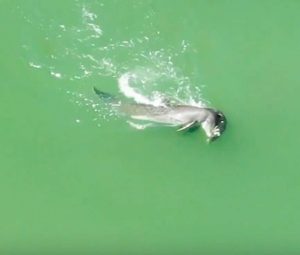 McCarthy wrote: ,,It was really hard to watch. This image is going to stuck in my head for a while.”
Оцените статью
Share on Facebook