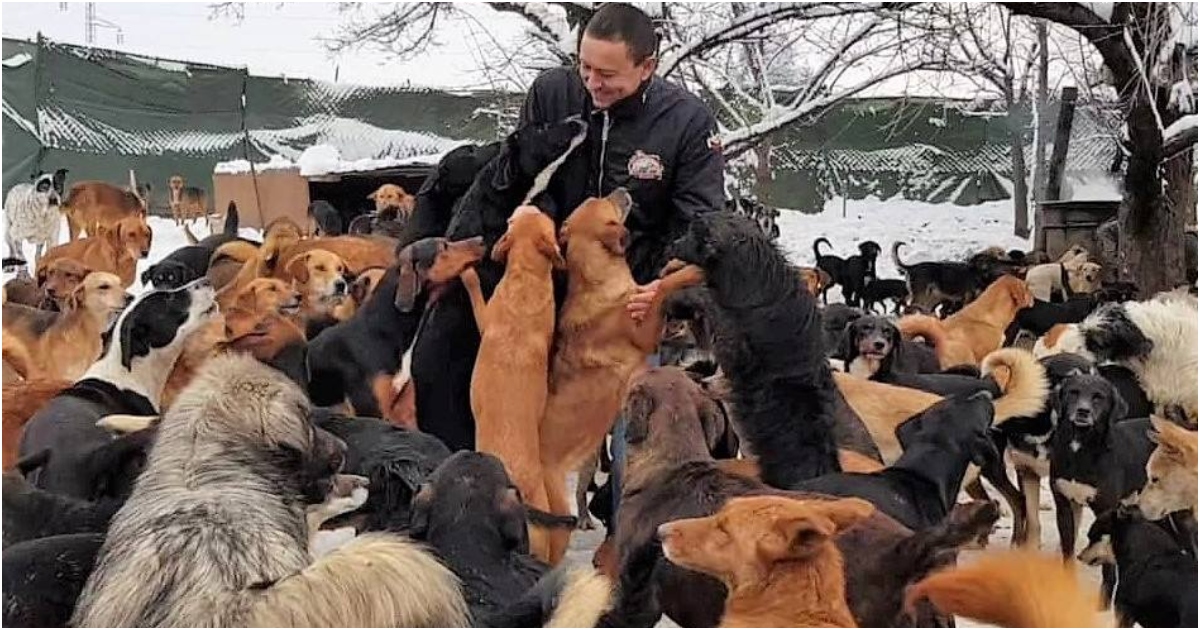 As you read this article, there is another cat or dog that has been abandoned by its owner. Worse, there’s another homeless animal that just gave birth to a litter that will eventually add up to the number of homeless animals.

Having this everyday cycle, the number of stray animals will surely keep on racking up and there seems to be no end to it. Thankfully, there are tons of non-profit organizations, individuals, and other groups that aim to aid these homeless animals’ horrific conditions on the streets.

One of them is a man with a golden heart, Sasa Pejčić.

He couldn’t stand the sight of the homeless dogs on the streets, so he decided to take care of 1100 dogs!

Dogs getting ill and dying on the streets make his heart ache at an immeasurable level. Sasa definitely has the heart for these creatures who are in need of food, medical treatment, home, and humans who will take good care of them.

Thankfully, he’s blessed with the resources, so he built his own animal shelter. He repurposed his property and transformed it into an animal-friendly space where his rescued dogs could be themselves – eat, run, and play like what they’re supposed to be doing. He wanted the place to be their sanctuary.

He is, without a doubt, an advocate of animal welfare. In fact, he’s been doing this for over 10 years!

According to his shelter’s website, “Over the past 10 years, Sasha Pesic has saved over 1100 dogs around the city of Nis, Serbia. The majority of the dogs were rescued from cruel conditions, they were abused and on the verge of death. Over 400 dogs have been happily adopted and are enjoying their new lives – full of love, safety and joy.”

Maintaining a conducive living space for dogs, feeding them, and making sure none of them gets sick – these things come with a good price. We are not just talking about 20 to 30 dogs right here, we are talking about hundreds of dogs. According to his website, there’s still a pack of 750 pooches under his care, and the shelter is in need of all types of assistance.

Thankfully, a USA-based charity called Harmony Fund supports Sasa in his mission of giving all the dogs the utmost care that they needed. The charity also aims to help homeless animals all across the globe by any means possible.

On their official website, they wrote: “We offer a lifeline to underdog animal rescue squads across the planet. Our partners are the small but incredibly courageous animal rescue teams who operate in parts of the world where animal welfare is quite poor. Our supporters are dramatically impacting thousands upon thousands of animals who might otherwise go without food, shelter and veterinary care.”

It’s assuring to know that there are people like Sasa and charity groups such as the Harmony Fund who are pushing their limits in order to save neglected dogs around the world. Hopefully, more and more people would also step up and support their cause in giving these adorable dogs a brighter future and a happier life.

For those blessed with golden hearts like them, you may extend your support by donating to Sasa’s shelter or Harmony Fund.

Watch the video below to see Sasa’s unparalleled love and care for homeless dogs.