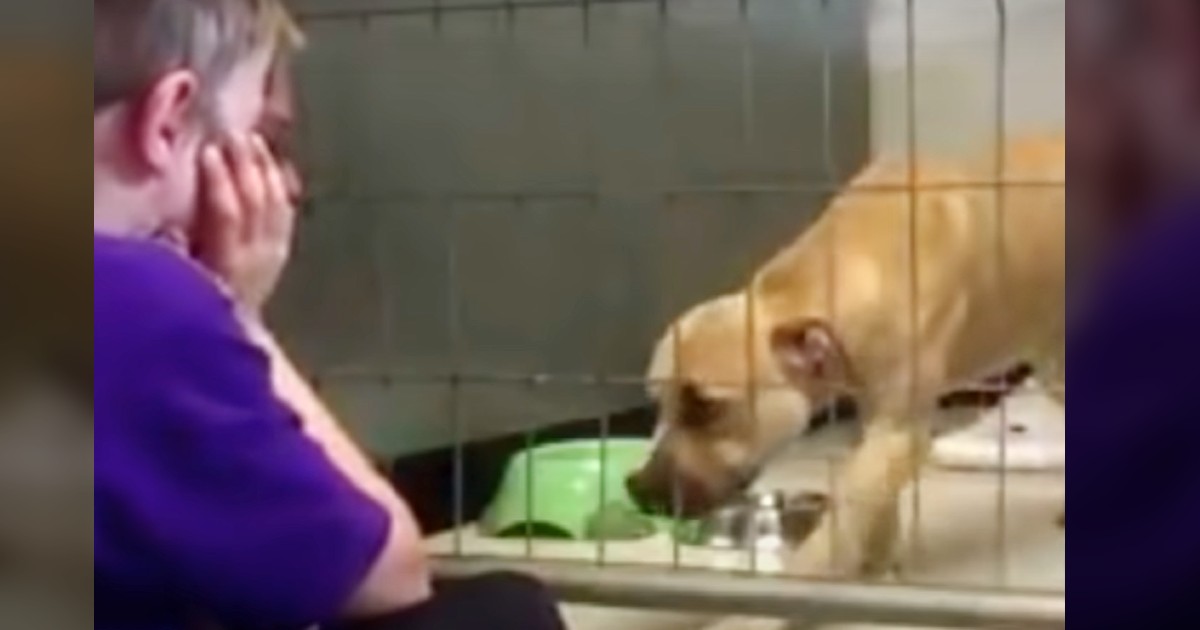 A pit bull named Nala was safe now, but she didn’t realize it yet.

Nala had been found roaming on the streets of New Zealand. She was taken to a shelter, Christchurch Bull Breed Rescue. But poor Nala didn’t understand where she was, and she was very anxious and was withdrawn.

However, after she was put into a cage, Nala just spent hours lying down at the far corner of the cage, refusing to move despite being called. Of course, the staff was worried about her not eating or drinking anything.

Days went by and they still couldn’t gain Nala’s trust.

Abbey van der Plas, who runs the shelter, spent two days sitting on the floor near Nala’s cage to try to get the dog’s trust.

However, no matter what she did, Nala won’t even budge. The pooch might be too terrified especially when she was suddenly placed in an unfamiliar environment.

No matter how Abbey tries to talk to her, Nala would only respond with a distressed growl. Nala continued to sulk, but Abbey also refused to give up on her.

When she brought in her son to help, something incredible happened.

Abbey might have realized that she couldn’t do this alone, and so she brought her 7-year-old son, Zack, to sit with her beside Nala’s cage.

Then, something surprising happened. Abbey’s son had yet to sit, but you could see the instance where Nala’s attention becomes focused on him.

The moment the boy sat down on the floor, Nala took no more than a second to stand up. The pooch stretched herself up and approached Abbey and Zack with a wagging tail. They did not expect that her son was all it would take to get Nala to stand up.

No one knew what happened with this pooch’s past, but there could be a connection regarding her actions.

We could only assume that Nala once belonged to a family with kids the same age as Zack. Otherwise, there’s really no clear reason why Nala stood up like that after seeing the boy.

Since that day, they were able to pet Nala without worries. Abbey and Zack decided to take her home and fostered her until they could find the perfect family for her.

They did struggle to find the perfect home for Nala.

With Nala’s separation anxiety, Abbey needed to find a family who could always be there to help her overcome it.

In a video of Nala from Inside Edition, Abbey commented:

“…we introduced Nala to as many people and situations as we could, not just our family. It was all about teaching her how to be confident in the world.”

Still, it became hard for them to find a suitable family who fits the description.

Many people who commented on the YouTube video about Nala wanted Abbey to adopt her.

However, in the end, she decided to find another home for her — she wanted to keep their home open for more pups in need. Luckily, they found the perfect forever home for Nala. Abbey wrote:

“Her new forever family had a wee boy the same age as my son, and they visited us many times and we visited them many times until she was as comfortable with them as she was with us. She adores them. 4 years on they all live happily ever after.”

We’re so glad that Nala found her forever home where she gets to grow up alongside her favorite kids. What a sweet ending.