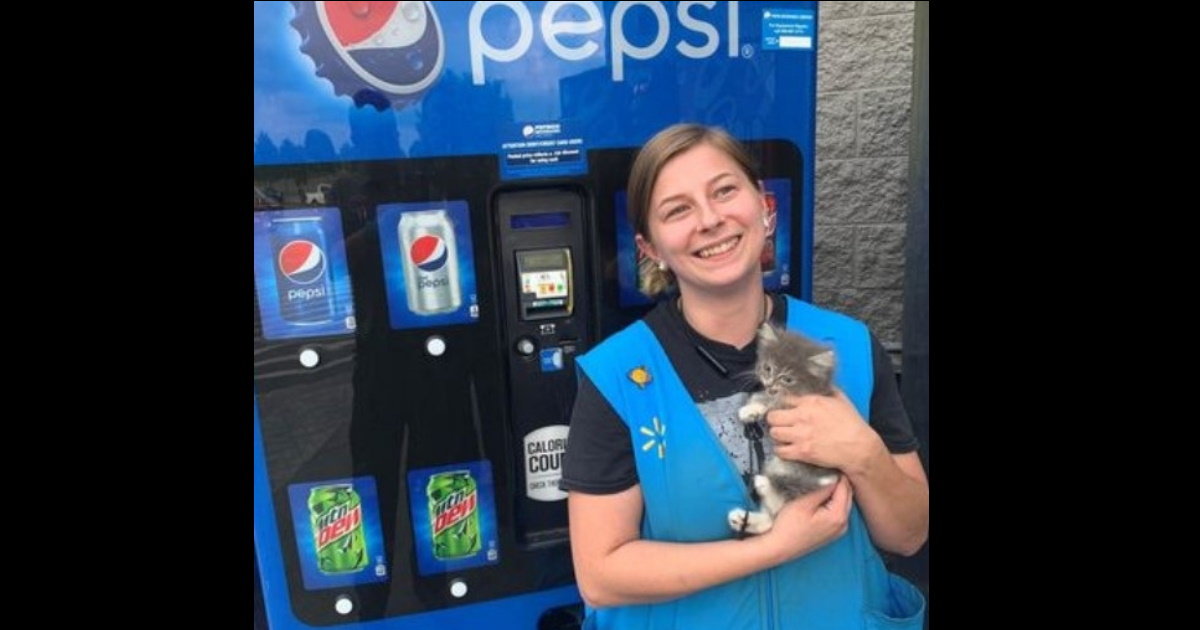 You can’t buy kittens at Walmart. But apparently, you can rescue them.

At least that’s what one Morristown, Tennessee Walmart employee did after she found one stuck in a soda vending machine.

Lindsey Russell said she was on her lunch break when she heard the cat’s cries coming from inside the vending machine.

She and her fellow employees immediately tried to get the cat out.

“I tried all through my lunch and my last break to get her. I tried recruiting co-workers to help me get her, and none of us could do it,” the employee, Lindsey Russell told WVLT.

That’s when Russell realized she needed to call in the professionals.

So, she called the Morrison Town Fire Department to help.

The firefighters from Station 1 arrived on the scene to investigate.

“Upon arrival, Lindsey told them that a kitten was in the Pepsi machine. Crews could hear the kitten crying. They unplugged the machine and removed the cover on the back, but couldn’t see the kitten. They found another opening where they could see it and coaxed it out,” the City of Morristown said in a Facebook post.

Thankfully, the kitten was unharmed and probably just a little shaken up.

“We could hear it meowing as soon as we came up. We knew it was in there and kind of stressed out,” Morristown fireman Doug Allison said. “If we can help save a life, animal or human, we’ll do what we can do.”

Apparently, grocery stores are a popular hideout for kitties looking for shelter.

“I actually rescued another one from Food City a couple of years back,” Russell said.

Now that she was rescued, she just needed a forever home. Russell was happy to help with that and took the kitten home.

She and her mother actually have experience with rescuing animals.

Firefighters suggested they name the kitten Pepsi after where she was found.

Others came up with “Mountain Mew” or “Morris” in honor of the fire department. But Russell decided to go with the first suggestion.

“This is Pepper, Pepsi, Pep, whatever you’d like to call her. She’s got a few nicknames now,” Russell said.

The story about Pepsi’s rescue ended up going viral and being picked up by news outlets like CNN, People, and USA Today.

Many people were very thankful to Russell and the fire department for helping the little grey kitten out and saving her life.

“Awww good job Lindsey and thank you Morristown fire fighters rescued the little baby kitten out of the Pepsi Machine,” wrote one commenter on Facebook.

“Great job MFD and Lindsey from Walmart!! It’s nice seeing positive things in the news for a change,” said another.

“Talk about serendipity…coolest story EVER! A big thank you to the caring young lady that saved kitty Pepsi! As a cat lover, this is the kind of story I appreciate waking up to!” and another.