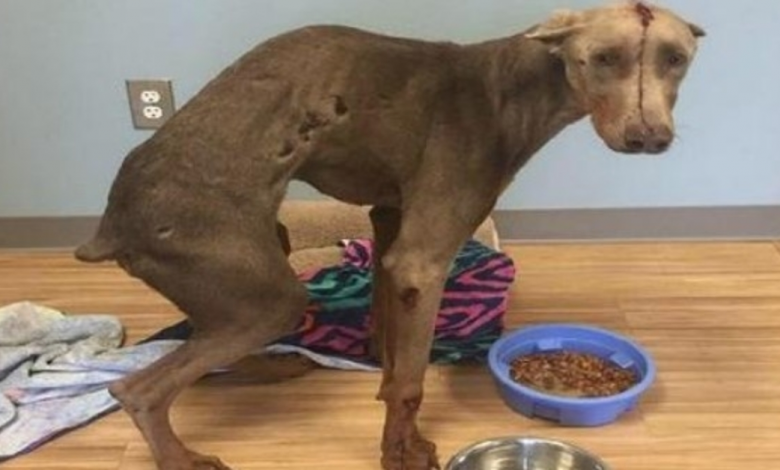 The stray Doberman’s spine was severed, but surgery and physical therapy have Spencer back on his feet and ready for adoption, writes dogfull

Everybody loves a cute dog video, but the first images Jackie O’Sullivan saw of Spencer the Doberman weren’t cute — they were a cry for help. 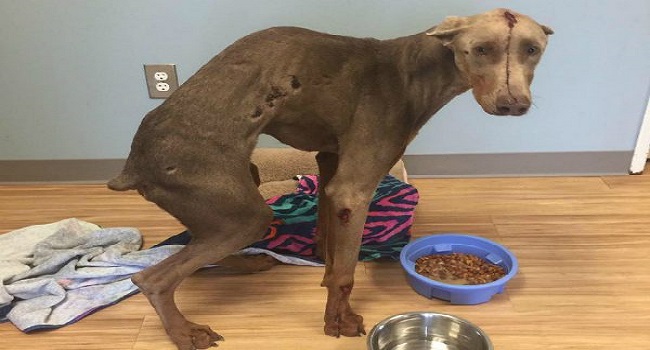 “He looked like he’d been snapped in half,” the co-founder of Rescue Dogs Rock NYC (RDRNYC) recalls.

The videos captured Spencer looking impossibly bent and understandably sad after being brought into a South Carolina animal shelter on Jan. 4. Shelter staff knew this dog needed resources they didn’t have, so hundreds of miles up the east coast, Jackie’s phone began lighting up with notifications.

When she checked her messages, she found two videos of the emaciated, presumably purebred fawn Doberman.

“They asked if we could take him, and I said yes,” she explains.

Jackie learned Spencer had been eating road kill on the interstate when he’d been hit by a car. He was then brought to the shelter, where staff quickly surmised that this was not the first bad day in 1-year-old Spencer’s life. 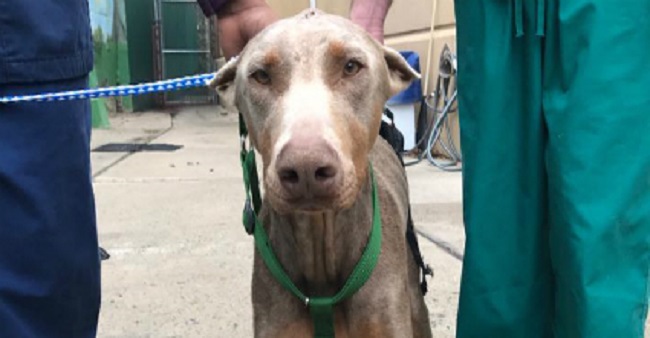 His badly home-cropped ears and scarred body told the story Spencer couldn’t – his rescuers wondered if he’d run from a life of abuse only to be hit on the highway.

“They got him over to our vet [in the area], which is called Paws and Claws in Columbia, South Carolina, and they could immediately tell that his back was broken,” Jackie recalls. “His only hope was to get to a specialty hospital, so they sent the X-rays over to a neurologist, so he went over there the same day.”

The vets of VCA Animal Specialty Center of South Carolina had some good news for Jackie. Because Spencer was so young and could still feel his legs, he was an excellent candidate for a surgical repair of his severed spine. There was some bad news, too, though: He had a stomach full of bird bones threatening to perforate his gut, and open wounds on his head and legs needed stitching. 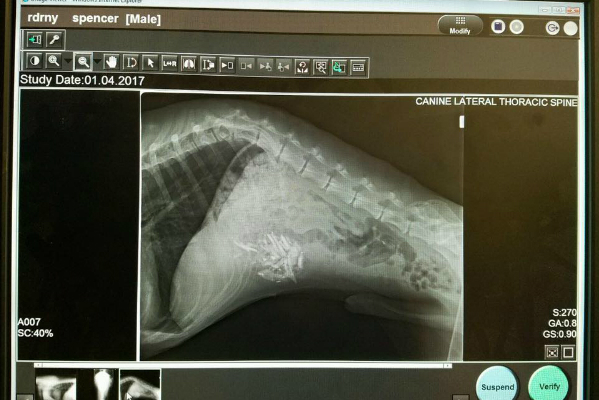 The secondary concerns couldn’t be addressed until Spencer’s spine was stabilized. The surgery needed to happen immediately and would cost thousands of dollars. Jackie knew Spencer was worth it.

“He looked broken in half, but he had a strong will to live. He was giving kisses, he was eating,” she says. “He had every reason to live.”

While Spencer was on an operating table in South Carolina, his pictures were being uploaded to the RDRNYC Facebook page, where dog lovers were as shocked by the images as Jackie had been. Well wishes and donations began pouring in, and by the time Spencer was off to physical therapy, he had his very own Facebook page. 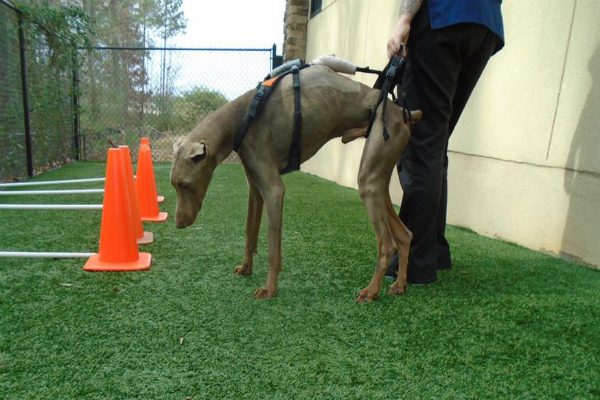 “So many people wanted to know about him, he actually crashed our website,” says Jackie.

In the days after his successful surgery, Spencer seemed determined to get back on his feet. His doctors were pleased to see the dog was eager to get to work in physical therapy, and even more pleased when X-rays revealed his body was safely passing the road kill bones. He wouldn’t need an operation on his stomach.

Two weeks into his hospitalization, Spencer was transferred to West Hills Animal Hospital & Emergency Center on Long Island, where RDRNYC can keep a closer eye on him as he continues with daily physical therapy.

According to Jackie, the only thing Spencer seems to enjoy more than his physical therapy sessions is playing with toys. He’s been gifted with plenty of them, and having his own playthings has brought out the puppy in him. 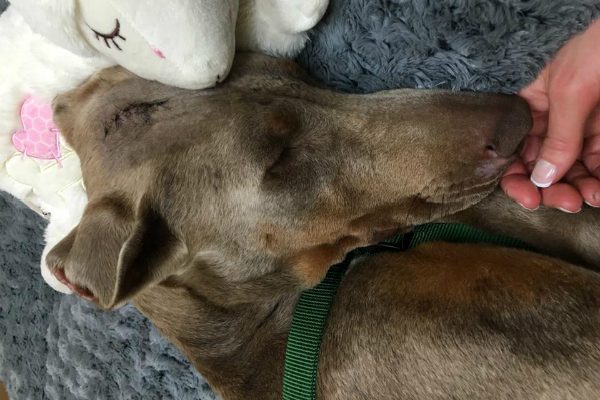 Over the past month, Spencer has progressed from walking in sling to walking on his own, and Jackie says he’s getting stronger every day.

Although he still requires a lot of physical therapy, Spencer is now ready to take the next step in his life, and RDRNYC is accepting adoption applications. Jackie can’t wait to see him walk into his forever home.

“He’s a young, happy, otherwise healthy, great dog. He is ready to have a great life.”