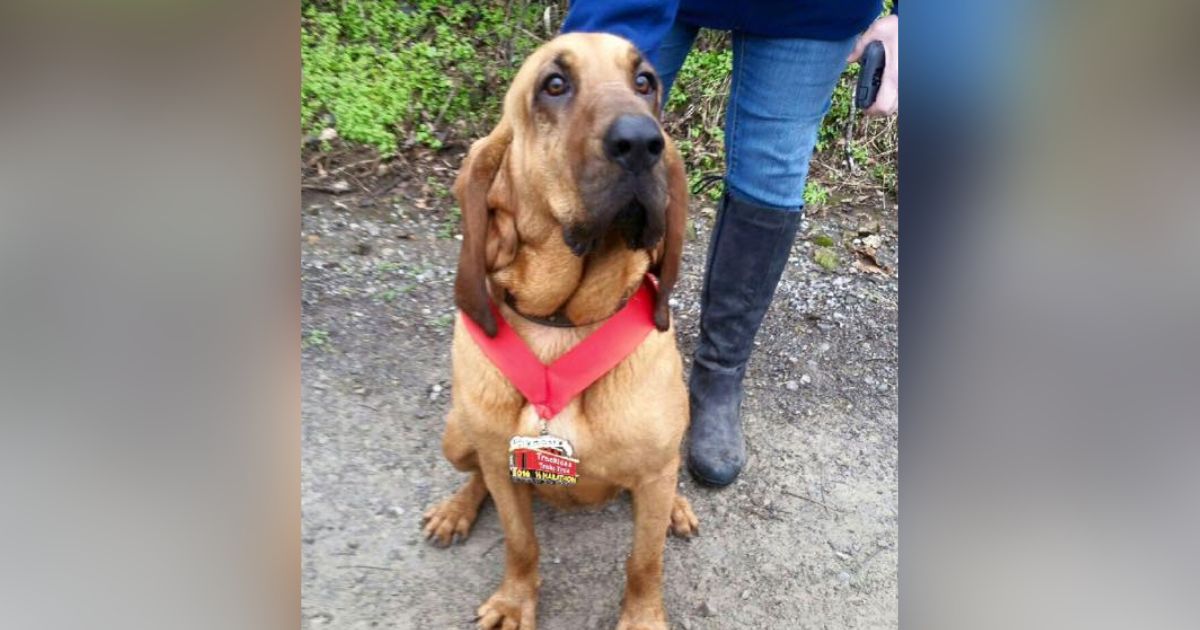 Running a marathon isn’t something anyone can do. Without the right training and a lot of stretching, you could easily wind yourself out or hurt yourself.

Marathon running is for those who are best prepared. But this marathon didn’t go the way anyone expected.

This bloodhound wandered into an Alabama half-marathon and invited herself to compete.

It was the 16th of January, 2016 when Ludivine the bloodhound was let out of her pen the previous night.

If there’s one thing bloodhounds are known for, it’s wandering off to wherever their nose takes them. Seems like Ludivine caught the scent of adventure on that fateful day, and it took her to a pretty exciting place.

Ludivine’s curiosity took her pretty far away from home to the Elkmont half-marathon, where a lot of runners were participating.

The adorable bloodhound couldn’t resist the large crowd. She was there when the runners were still at the starting line and obviously joined them.

The signal went off and Ludivine bolted alongside the runners.

No one knew who this bloodhound was or why she was running with them. But I don’t think they minded one bit.

Ludivine ran the whole race. It’s been presumed that being in the presence of other runners gave her some extra energy. You know how dogs are.

Now with limitless energy and the whole town to play in, Ludivine did a lot more than just finish the race.

Bloodhounds were bred for tracking and chasing animals. And on this day, Ludivine got to do everything a bloodhound was meant to be.

She even encountered some roadkill that she used to, uh, “replenish” some of her energy. Gross.

She also ran off the course to befriend some animals – namely some mules and cows.

Running a marathon can be exhausting, so she went for a drink somewhere too.

And she finished the race too, all without knowing it was a race.

Clearly, it was quite the story for her owners to hear about.

But her owners weren’t the slightest bit surprised. It was all in character for Ludivine, as they explained.

“Ludivine was bred to be a tracking dog at the local prison and was culled due to her inability to focus on the task at hand.”

The race had 165 runners participating. Makes it all the more impressive that Ludivine finished 7th!

The people loved Ludivine so much that they gave her an honorary medal for completing.

Ludivine then returned home after making that scene and took a nap. She kept her medal with her, obviously.

Hamlin says that Ludivine is usually “laid-back”, and that this little adventure of hers was a rarer instance of her being not-so-laid-back.

“My first reaction was that I was worried she had gotten in the way of serious runners who had trained for the event.” – she said

But no one was hurt, and Ludivine got to have a fun day that made the news.