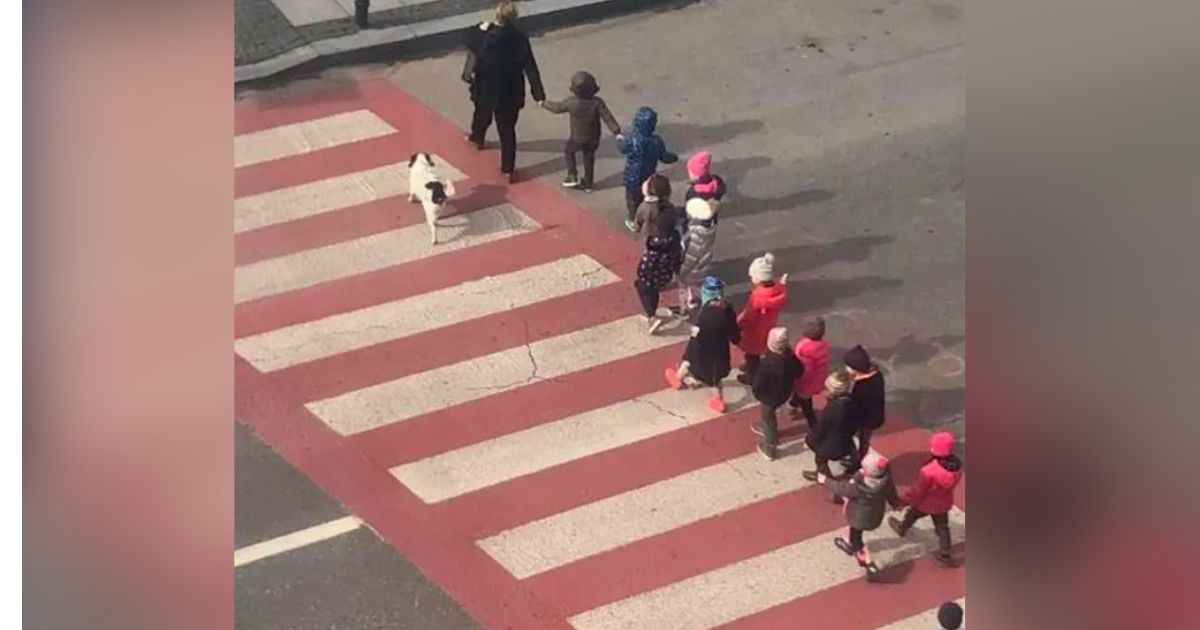 Kupata is a stray dog from Batumi, Georgia who has a big job.

It’s a self-appointed one, but an important one nonetheless.

He’s a school crossing guard that helps all the local school children cross the street.

Kupata absolutely loves children. That’s why he wants to make sure they get to school safely.

Kupata appeared in town one day when he was a puppy.

Though Kupata was a stray the community always fed and looked after him.

He lived in the stairwell of some local apartments. One day he just started jumping out at cars to halt them so that children could cross the street.

Kupata will start barking ferociously at the cars. Once they stop, he goes back and walks with the children as they cross.

Kupata started becoming protective over the children because he would play with them at the park that’s next door to where he lives.

Kupata lives to make sure that the park is safe for children.

“He has 3 best friends, the woman named Nona, who feeds him, also one little girl, and Beka, who cares for him as well. Kupata grew up with kids, he loves playing with them. There is a park next to his place, so he is always playing with kids in that park,” the person who runs Kupata’s Instagram told Bored Panda.

Or eating sausages. He loves sausages! So, much so that he was named after sausages.

When Kupata isn’t watching over the local children, you’ll find him taking a nap.

Kupata is well-loved in his community and became a viral sensation when a video of him crossing children was posted online.

People come from all over just to see him and take a picture with him. The Adjara Tourism Department even gave him his very own dog house.

He’s even painted on the side of a local building. Kupata has inspired a local program that offers a meager annual stipend to individuals who adopt stray dogs in Batumi.

The City hopes that it will help alleviate their stray dog problem. So, Kupata is kind of a big deal. People know him.

He’s even referred to as “Pride of Georgia” on his Instagram page. You’ll find lots of pieces of artwork inspired by Kupata on that page.

But Kupata doesn’t care about his internet stardom or being a local celebrity.

He just cares about getting those kids safely across the street. And he gets lots of love in return for it. People from all over send Kupata gifts. So he isn’t just beloved in his own town but throughout the world. But Kupata doesn’t let it get to his head.

Learn more about Kupata’s story in the video below.