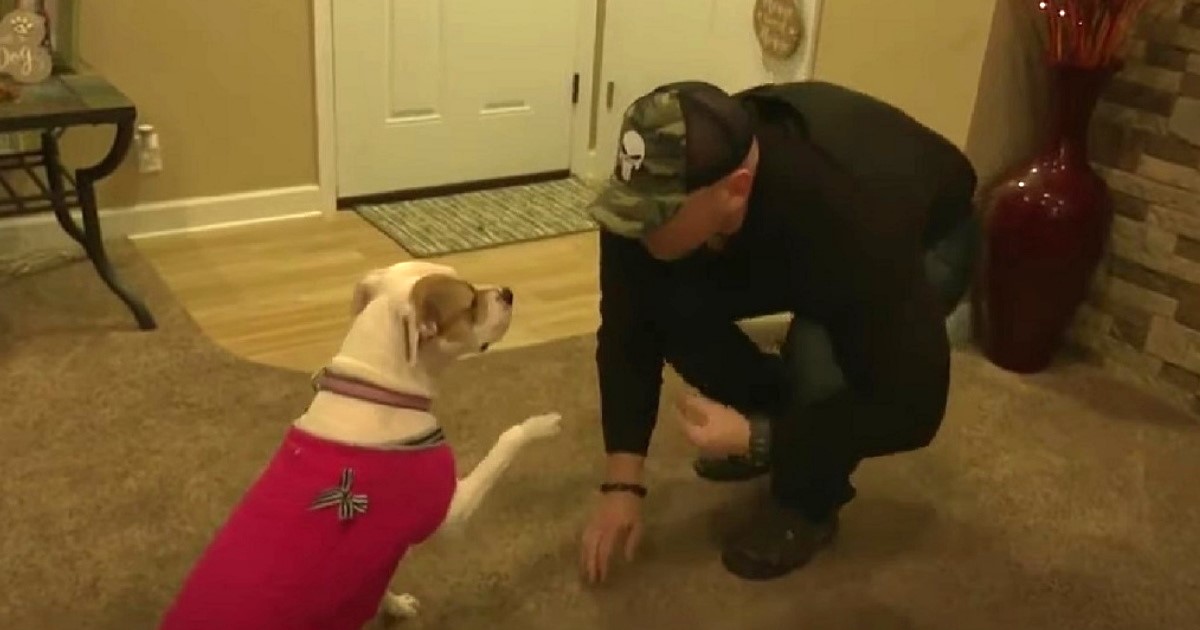 After a man received heaps of praise for rescuing his neighbor, he went out of his way to share the full story and let everyone know how much of the rescue was done by his dog. Had it not been for a Pitbull’s insistence that something was wrong outside of his house, David’s neighbor might not have survived.

Bella the dog typically only barks a few times.

As her owner, David knew all of Bella’s habits and what was normal for her. When she saw a stranger, or someone was at the door, she lets out a few barks and then moves on. She’s not a very loud dog and she’s typically well behaved.

This is why David knew something was up when she just wouldn’t stop barking. Not only was it strange that she was barking a lot, but she also was pawing at the back door — something she never did.

When David and his fiancé went outside to see what Bella was barking at, they were shocked to find their had neighbor fallen on the ground.

David’s neighbor was elderly and had a few health issues. David knew that his neighbor needed help getting up and back inside. If it had not been for Bella, David would have never known about the person who needed help.

David helped the neighbor up and get back inside, then made sure she was healthy before going back to his own house. It was a cold Wisconsin night, so she might not have survived the elements for many hours.

David was so impressed by Bella’s intelligence and unwillingness to give up.

He took to Facebook to share the story with the world. In his post, he recalls all the details, and explains why he was so amazed that she acted this way:

“Bella and the other dogs see the neighbor quite frequently and don’t bark or make a fuss when they see her, so I was taken back by Bella’s intuition that something was wrong and that she needed to get our attention. Given our neighbors age, the time of day that this happened, and how low the temperatures get at night in Wisconsin this time of year, this could’ve potentially been a very tragic situation.”

After David shared the incredible story of his dog’s sixth sense, it went viral.

The story has 123 thousand shares on Facebook, and 335 thousand likes. The overwhelming response has been one of praise for Bella and gratitude that sometimes, our pets have better intuition than us.

“Bella is an amazing dog and you two should be rewarded for her quick act of kindness.”

Someone else praised Pitbull dogs, which is Bella’s breed:

This amazing story is just another piece of evidence that humans would be far worse off without dogs.

Learn more about this story by watching the video below!