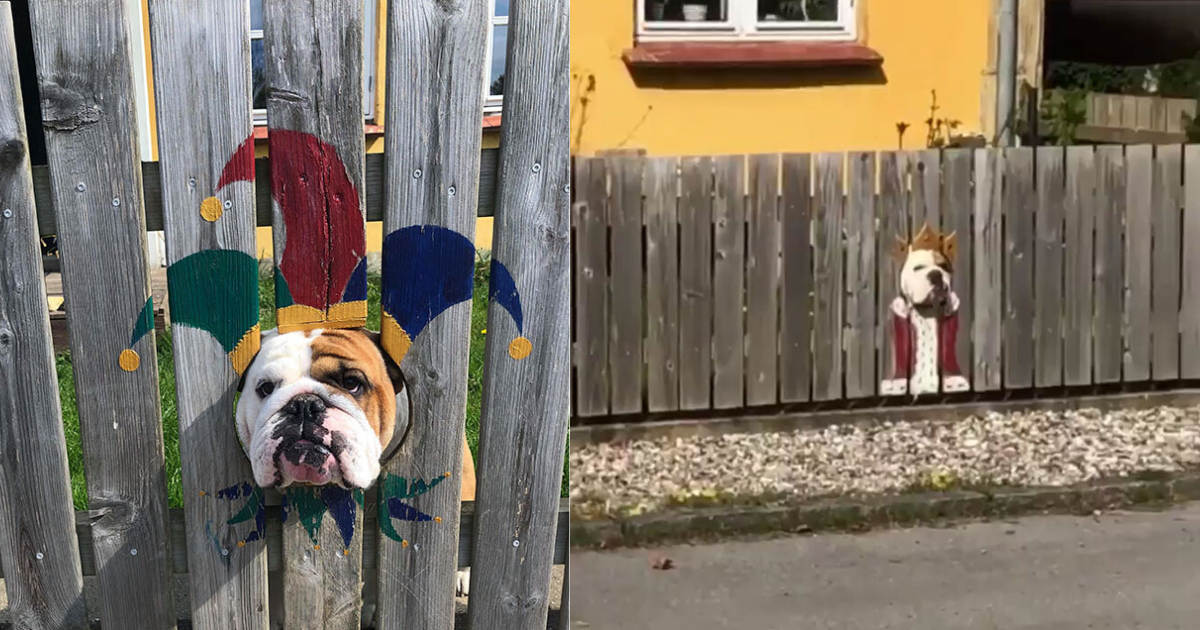 People are finding their own ways to keep themselves entertained during lockdown, from revisiting an old hobby to learning something new, spending quality time with family, or creating a business.

But one family from Denmark has well and truly won at lockdown entertainment when they posted a hilarious outfit for their bulldog on a fence.

It will all start to make sense in a minute…

The nosy dogs love to poke their heads out from two separate holes in their garden fence and watch the world go by, so their owners had an idea to paint miniature outfits on the outside of their fence for their two pooches.

Ranveig spoke to Bored Panda about her two pooches, describing Bogart as ‘funny’ and with a ‘nice personality.’ She said:

“He (Bogart) is a 4-year-old English Bulldog—we have his mother, Winston (she doesn’t care about the male name), and we decided that she should have puppies. […] She [had] 8, and we kept Bogart—he was the smallest and totally cute.”

This sweet pooch became an internet sensation when a video was shared of him poking his head out from a hole in the fence — but he’s ‘wearing’ the most hilarious outfit!

The video was posted onto Danish news and media page 112nyheder, and it instantly went viral with 15,000 reacts and 62,000 shares.

People just couldn’t get over how funny Bogart looked, and it’s certainly given everyone a much-needed laugh during these difficult times.

In the video, Bogart is seen with his head sticking out from the fence hole, totally unaware that he has a king’s crown and a grand outfit painted onto his ‘body.’

His nonchalant face makes the whole thing so much funnier, and we can hear the people filming laughing in the background as they take in Bogart’s expression.

Speaking about their inspiration behind the whole thing, Ranveig said:

“We are living close to a walking path, so many people pass by every day, and the dogs are just so curious. To prevent them from skipping the fence, we made the holes, but even if it was funny to see them from the other side, I just thought it would look even [funnier] if we painted something.” She added, “You know, like in amusement parks where you can have your photo taken in these kind of holes.””

We think that this is the most ingenious idea!

Ranveig knew that painting the bulldogs their own ‘outfits’ would give passing strangers something to laugh about — though she probably had no idea that one of her pooches was going to end up going viral!

Ranveig put her plan into action with the help of her talented daughter, who ended up being the one to paint the dogs’ outfits. They turned out marvelously.

Bogart has now become a local celebrity in Denmark, apparently going on one of Denmark’s biggest influencers’ Instagram pages, and Ranveig is shocked by the effect that her hilarious pooch has had on the internet. She told Bored Panda:

“I, myself, am blown away that my little dog has gone viral—just because he looks goofy.”

Watch below, this precious dog is just too funny!