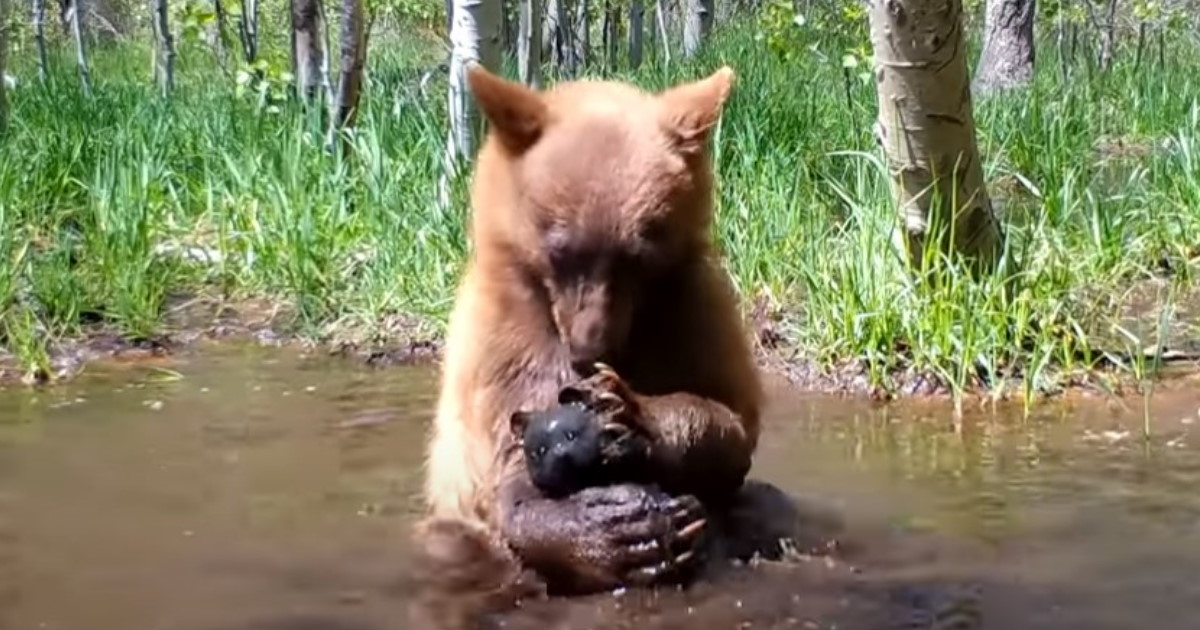 An adorable moment was captured on film out in the wilderness, and it all started with a little bear.

Toogee Sielsch has been keeping a watchful eye on an orphaned cub named Tamarack, who was rescued from a wildfire zone in Northern California.

Poor Tamarack’s paws were singed in the flames and required treatment.

Thankfully, he was taken into a wildlife care facility to get the care he needed.

But Tamarack was a free bear and he needed to live that way.

So, the little guy escaped from the facility to head back to his home in the wilderness.

He literally escaped an enclosure and then tunneled under an electric fence.

That’s how much he wanted to be free. Sielsch catches glimpses of Tamarack through trail cameras that are located throughout the forest near his house.

And footage shows that the little bear is doing just fine all on his own.

Actually, better than fine. Not only is he able to survive out there all on his own and provide himself with basic necessities, but he’s also got toys.

Sielsch even caught Tamarack taking a bath in a big puddle with a friend.

That friend was a plastic toy bear figure.

And no one knows where the little toy bear came from.

The video shows Tamarack jumping into the puddle with his muddy paws poking out and grabbing up his little bear as it bobs up and down out of the water.

“I thought how it was almost a perfect example of the playfulness of not only young black bears, but all of them,” Sielsch told The Dodo.

Sielsch was overjoyed knowing that Tamarack was out there living his best life after everything he went through.

“It makes my heart very happy to have watched his progress against all odds as an orphaned and healing cub of the year, now yearling,” Sielsch said. “It shows just how tenacious wildlife is when it comes to survival.”

Apparently, cubs are known to be able to survive in the wild on their own if the conditions are right.

“Leaving a cub in the wild is a viable option for many cubs if they are old enough to survive alone and have adequate fat reserves,” John Beecham told The Wildlife Center of Virginia.

“American black bear cubs as young as 5 to 7 months of age have survived. Information from studying released bears suggests that survival rates are higher for older, larger cubs.”

The video shows that Tamarack is clearly not just surviving but also thriving.

The video of his bathtime play was posted on YouTube where it was viewed thousands of times. It was also featured on The Dodo.

“This is super adorable!! All that needed to be added was the bubble bath. Loved how when he dropped it he hurried real fast & grabbed it & was like you all alright buddy,” wrote one commenter.

“This is the greatest thing ever… do you think the bear has awareness of the toys similar features or just a coincidence?” said another.