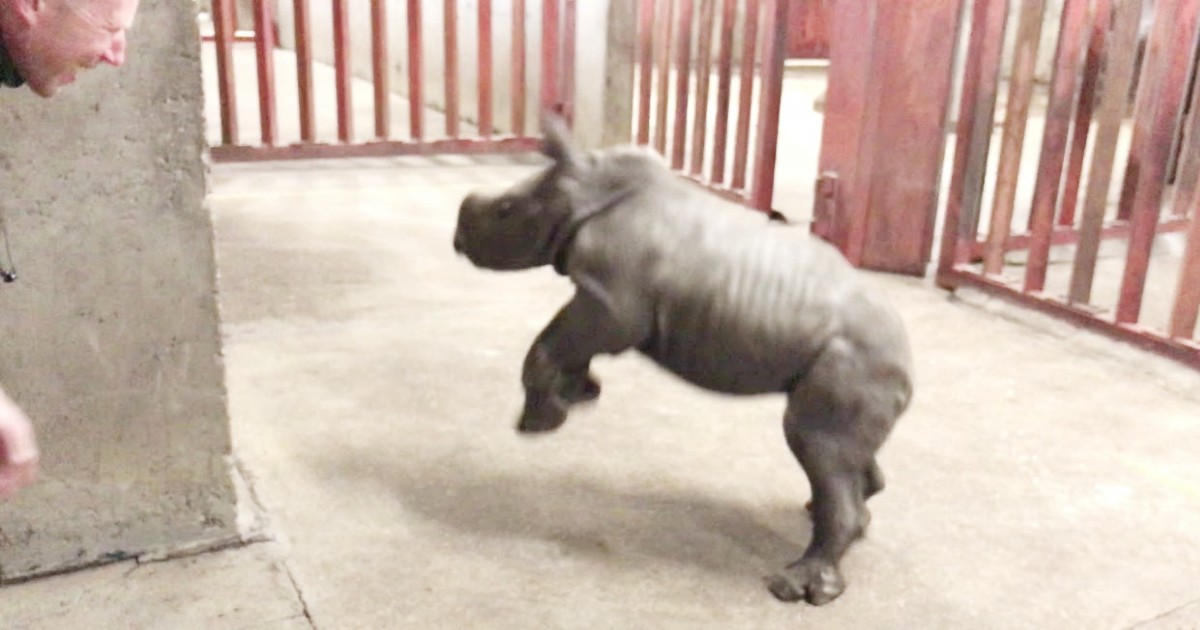 We humans have a responsibility to preserve our unique world and its ecosystem. There are so many unique animals in this world, and it’s our job to keep these animals safe and protected.

One of these animals is the rhino. These animals grow up to be massive, but when they’re young, they’re very small and playful.

A great example can be seen of this in a video of a baby rhino interacting with a zookeeper named Thomas.

The little rhino is named Savannah, and she sure has an immense amount of energy.

From the moment the video starts, we can see her trotting gleefully toward the human zookeeper with friendly intent. She is but a young calf that just started her journey and is looking to make new friends along the way.

Making her way toward Thomas, she approaches by putting her head on his hands to show she is ready to play.

Savannah then backs up and prepares to start her part in this interaction.

She skips along the pavement to and fro the ends of the barred cages in an innocent display of curiosity and her spunky attitude.

It’s so adorable that the camera girl can’t seem to hold her giggle from how delighted she is to be a part of Savannah’s frolicking.

As the baby rhino continues her rambunctious circuit, we can see her mama in the back keeping a keen eye on her.

Protective as always, mothers typically tend to accompany their rhino calves from 2 to 4 years of age. Judging by her docile behavior, mama seems to be in approval of her baby’s new playmates.

After bubbly skipping some more, Savannah comes back to the zookeeper as if to let him know that she needs all the attention she deserves.

At this point, she reports back to her mama to affirm to her that she is fine and dandy in her new environment.

A rhino pregnancy can last anywhere between 15 to 16 months.

In addition, a newborn rhino typically starts nursing from its mom in the first five hours of being born and will need to start grazing at around two months of age.

If you think Savannah can sprint now, wait until she develops and matures into her adult form.

One of the reasons we see Savannah taking minor pauses and acquainting herself with her surroundings is because rhinos have acute hearing and smell, but very poor eyesight.

You can see an example of this as Savannah gently bumps into walls as she sometimes takes her time to adjust.

In her final display of innocent affection, Savannah meets the zookeeper one last time and joyously leaps in the air to show her level of excitement.

She delightfully comes back for one more nose-to-hand farewell as if to let him know that she now fully trusts him as her caretaker.

Finally, Savannah reports back to her mommy with the comfort in knowing she now has new friends to play with if ever she becomes too bored.

With her energy, though, we’re sure she’ll find a way to keep herself entertained.

It’s so adorable to see Savannah playing and having a good time. As one YouTube commenter put it: