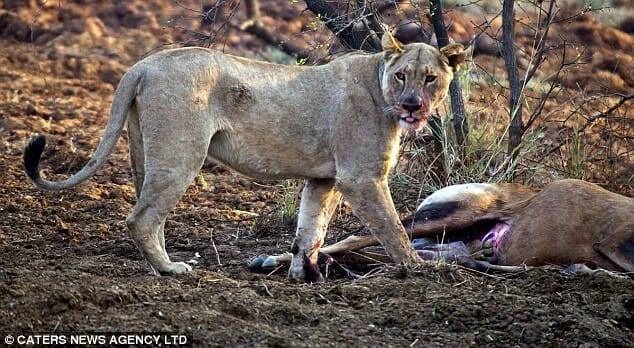 Wild animals sometimes behave so gently that you completely forget that in front of you is a predator that can kill you within a few seconds.

Recently, in the Madikwe Game Reserve, in South Africa, a ranger named Gerry Van der Walt, witnessed something that perplexed him completely. Gerry and a group of visitors have seen something incredible. 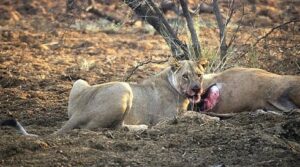 When they were examining how the lioness hunted an antelope they couldn’t have imagined that their eyes would soon see unbelievable things.

When the lioness hunted the antelope and was going to bite her suddenly the predator stopped and looked around. Soon she took in her mouth a baby antelope that came out of the victim’s stomach. The lioness stood motionless for a while with the cub in her mouth and didn’t know what to do. Instead of eating, she thought about how to save the newborn. 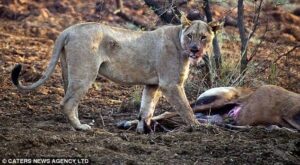 The lioness was confused od her cruelty when she understood that the victim would have become a mother soon and that now she had her baby in her mouth. Being a female herself the predator couldn’t deal with the idea that she killed a mother and not even born babies. But what she had done next would amaze you even more. 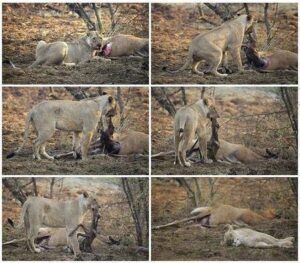 After putting up with the idea that she couldn’t save the child she place the little one near her mother and laid there herself. It was as if she was sharing their grief and was feeling remorse for having taken the life of a mom and for not having the ability to save the baby.

Gerry shared this story and it went viral. All who saw the photos and read the story stayed in total astonishment.