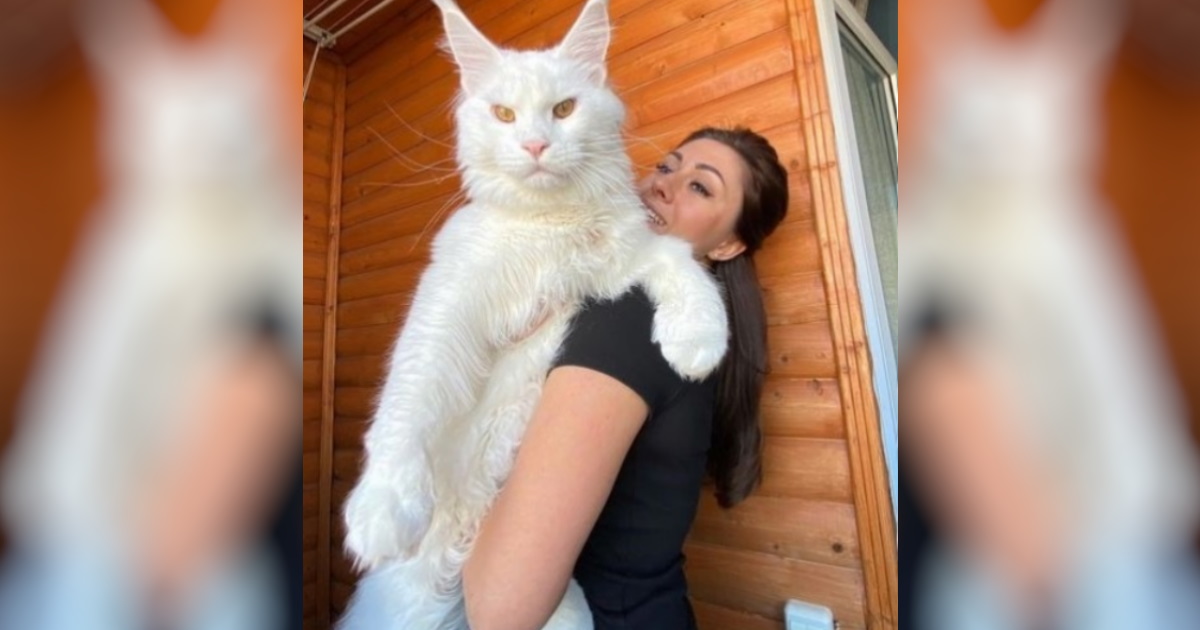 A Maine Coon kitten named Kefir is breaking all the rules when it comes to preconceived notions about cats.

When most people think about cats they think of creatures smaller than dogs.

But Kefir is so big that people often mistake him for a dog. This big boy is already 27 lbs. and still growing.

Maine Coon cats are a naturally large breed and Kefir, an almost 2-year-old, is already larger than the typical adult Maine Coon cat.

Yulia Minina, of Stary Oskol, Russia, fell in love with Kefir’s snow-white fur when she found him at a cattery as a kitten.

Kefir, named after the yogurt drink, was a fancy cat from the start.

He wouldn’t go near dry food and instead had to be fed meat and natural feed.

While he may look a little intimidating because of his size, Minina says he’s a big teddy bear at heart. He also has about two more years of growth.

“I could not even think that an ordinary baby can become so big. He not only grew up big in appearance, he is also very smart and always behaves calmly,” Minina said, according to METRO. “The look is generally like that of a person, and Kefir has a formidable appearance, but he is a very affectionate and modest child.”

Kefir’s long illustrious fur also adds to the bulkiness of his silhouette. So, Menina makes sure to groom him often to keep him feeling lighter and to prevent shedding. She says that Kefir is the star of the show when her friends stop by and quite the spectacle when it comes to visiting strangers.

But that’s pretty typical for the breed according to Main Coon Central.

“Maine Coon cats are known for being a very friendly, laid-back, and gentle cat breed. They are not aggressive, nor highly territorial in their nature, so adapt well to other animals living in the same home. Their gentle nature, yet playful behavior means that Maine Coons are good with both kids and dogs,” the website states.

“Maine Coons act like dogs, and are known as the ‘dog of the cat world’. They have a friendly canine-like disposition, enabling them to build strong bonds with family members, and get on well with other household pets. Maine Coon cats are similar to dogs, since both are intelligent, loyal, and will greet you at the door.”

Another dog-like attribute that Kefir has is that he always wants to sleep in the bed with mom.

Even if he’s too big for it!

“He has one more habit: at night he likes to climb on me and sleep. When he was a kitten, it didn’t cause me any inconvenience. But now he has become big and heavy, and, of course, it is difficult to sleep like that,” Minina says.