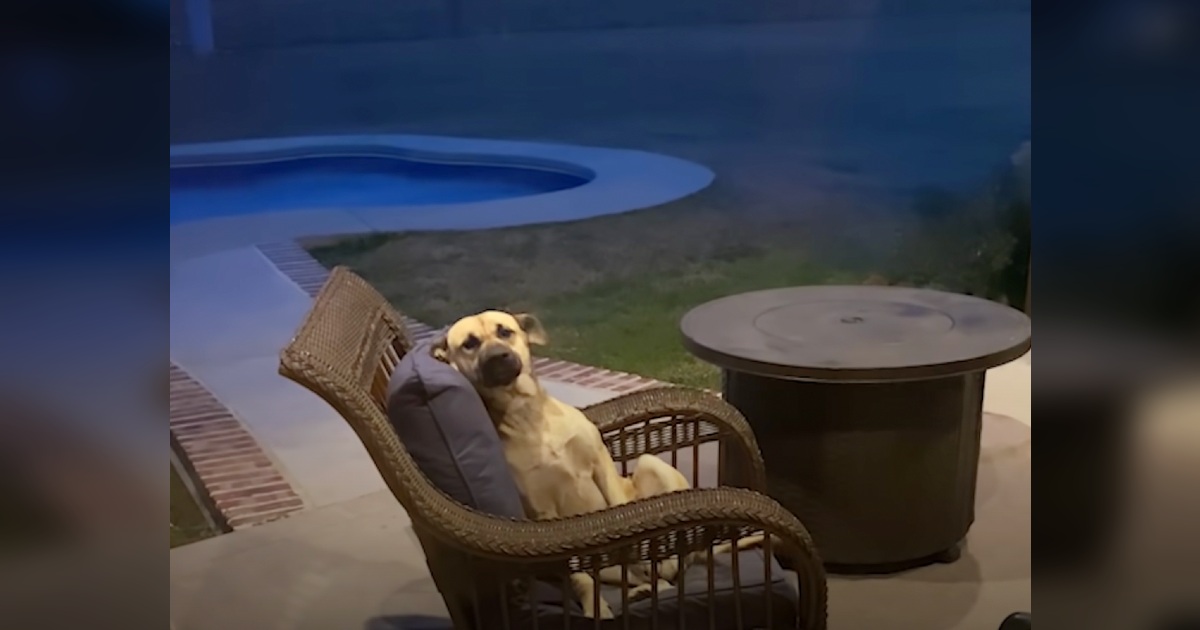 Amy was getting dressed for work whe

Are you a dog or an animal lover? Do you love living with your furbabies at home?

Amy Haden lives in a house with a lovely yard with her daughter, where they live peacefully with two pets.

One morning, she was getting ready for work when her daughter called out to her and said there was a dog on their porch. Thinking nothing of it, she responded that she had just let out the dogs that morning. But Amy was shocked when her daughter said, “No, this dog is not ours.”

And when she looked outside on their back porch, she confirmed with her own eyes that the dog outside was not their dog.

And he was making himself at home, too. He was sitting on his behind on one of the porch chairs and was just looking at them while they looked at him. It’s almost like he was waiting for them to come out and hang out with him.

At first, they thought he was just taking a stroll around the neighborhood but belonged to someone. But when they found him on the same spot when they come home at the end of the day and the next morning, they knew he already felt he was at home.

So what would any responsible neighbor do?

Amy reached out to her community to find out who the owner was. She texted her neighbors and even posted on Facebook but no one claimed him. But she didn’t give up. She went to the vet so they can search for a microchip but found none.

So they decided to take him home for now and figure out what to do later. They continued to search for the owners while they took care of Walker. They couldn’t think of a name so they decided to let the TikTok community name him.

Unfortunately, even though Walker was such a sweet dog, he couldn’t get along with Amy’s other dogs. She had to rehome him.

When the search for his previous owner turned out empty, they decided to look for a new home for Walker instead. It was a difficult decision for them since they’ve grown to love Walker. But the cost and time of taking care of three dogs was something she and her daughter couldn’t handle anymore.

Fortunately, they were able to find a new home for this sweet dog with a little old lady.

It’s so great that Amy paved the way for them to find each other.

While Amy’s story had a happy ending, it won’t always be the same for each lost or stray dog we meet on the roads or in our house. The RSPCA have shared a few tips on what to do.

If the dog is injured or sick, be sure to call your local animal shelter or animal welfare group immediately so they can make sure the dog receives proper medical care.

But if they are healthy, approach them with caution. Don’t lean your hand or tower above the dog. You can sit and wait for them to come to you while you talk to them in gentle, mellow voice. When they go to you and let you take care of them, see if they’re wearing a tag with their owner’s details.

If not and there’s still time, bring them to the vet to get them checked out and to look for a microchip. Get in touch with your neighbors to find the owners. Post on social media. Put up posters.

When you can’t find the owner, decide whether you want to keep them or find a new home for them.