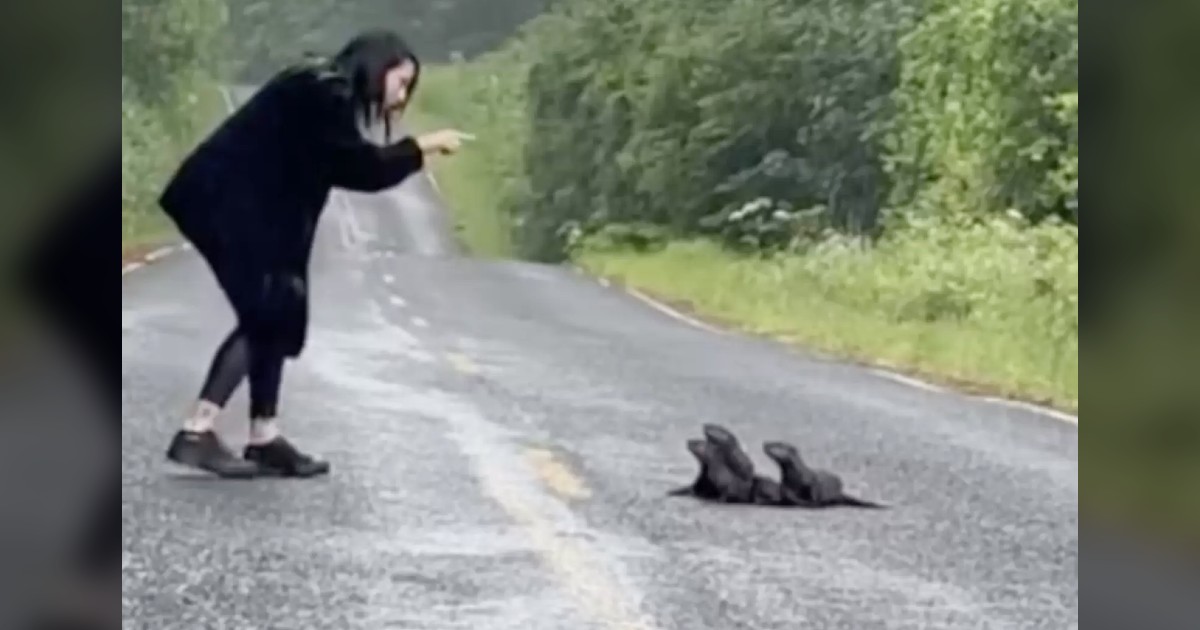 Natalie Therese wasn’t sure what the furry clump she saw in the middle of the road was.

But she did have the feeling that she needed to stop the car and see if it was OK… whatever it was.

She asked her partner to pull over and realized that it wasn’t a furry clump but three of the cutest creatures on earth.

“As @ghoulishbones and I were leaving our B&B, we saw these precious babies on the road! Of course, I nearly jumped out of the car to make sure they were okay and safe,” Therese said on Instagram.

Therese then realized she saw the otters’ mom run away to avoid an oncoming car and was waiting in the wood on the other side of the street.

But the baby otters just froze.

“My partner thought [they were] just a clump of dirt or something!” Therese told The Dodo.

The out-of-place baby otters were stranded in the middle of the street while mom helplessly watched from the sidelines.

That’s why Therese knew she had to do something to help the trembling little otter babies. She got out of the car and “gently encouraged them off the road.”

“It’s OK,” she cooed at the babies as she got close.

One of the babies looked right at her and squeaked.

“Hiiiii!” she said at the little one squeaked back again.

“Go get your mama!” she told them.

The one who was chirping at her seemed to understand because it ran off toward its mother who was sitting in the tall grass.

Its other sibling continued to sit in the middle of the road while the other one ran in the complete opposite direction. After a little more coaxing, the otter in the road followed its other sibling and went towards mom.

“Afterward I waited a few minutes to make sure the otter that ran the other direction was reunited with the others and the mother came back for all of them. They all ended up safely off the road together,” Therese said in the video of her encounter with the otters.

Therese was happy to see that the babies were safe and reunited with their mother.

While she may have been responsible for keeping these babies safe that day, she said the ordeal also had a profound effect on her.

She recalls being “touched and moved to tears from the whole experience.”

“Mother Earth and Her creatures are so precious and we must do what we can to protect them,” said said.

Therese’s video ended up being liked more than 2,200 times with many thanking her for taking the time to make sure the otters safely crossed the road.

Check out the adorable video of Therese and her otters below.