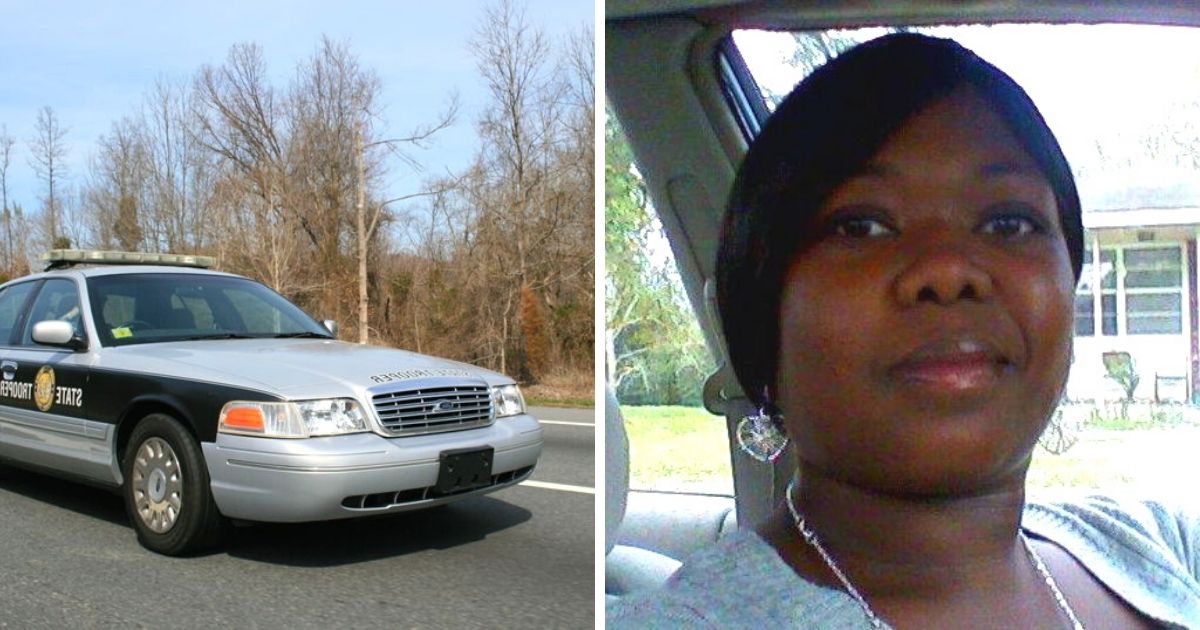 It was just a normal morning for Kendra Powell as she was on her way to work in Georgia. Normal, that is, until she noticed something that caught her attention.

She saw a state trooper vehicle on the side of the road with the trunk open, but there was no one to be seen.

For whatever reason Powell felt a strong call to check on that vehicle.

What happens next is something everyone involved will never forget.

Although the motto for police officers is to protect and serve their communities, news story reporting over the years has made many citizens trepidatious around them.

Powell listened to the urge and turned back around to check out the scene.

Powell is fully aware of the racial tension running throughout our country. Due to this many citizens have to be extra careful when interacting with officers.

She slowly arrived at the scene putting her window down a little and then the state trooper appeared.

“I felt compelled, even with everything going on in the media, to stop and make sure he was okay. I never saw him, just the car. So, I creeped past at a snail’s pace and turned around. I pulled up to the car and cracked my window, hands clearly visible. I saw a white trooper come from the side of the car.”

She’d soon find out what he was up to.

After greeting the trooper with a kindhearted “good morning”, Powell wanted to make sure if he was alright or needed any assistance in any capacity.

Despite other stories she had seen in the media, the Georgia resident was met with nothing but kindness. Turns out too, there wasn’t anything wrong – he was simply cleaning the windows of his vehicle.

“He smiled a brilliant smile and replied no ma’am that he was cleaning his windows. He showed the bottle and towels to me and I told him he had the good stuff. He chuckled and asked if I minded if he cleaned mine too.”

It became a scene that caught other motorists’ attention as well.

Much to Powell’s surprise (and delight), the state trooper began cleaning her windows right there on the side of the highway. She explained in her post:

“Highlight of my day…state trooper cleaning my windows with the good Rain X cleaner. Every passerby had a stunned expression on their faces. Then an elderly white couple stopped by and asked if they could have theirs done also. Lol, so he cleaned theirs too.”

While the situation had already warmed Powell’s heart, it soon transformed into another powerful moment.

“The lady offered to pay him and he said no, just say a prayer for me…so we did. Right along 46 in the wee hours of the morning parked beside the road for EVERYONE to see, we all linked hands and had prayer. White hands, black hands, officer hands, young hands, and old hands…gave glory like never before.”

In light of being so touched by her morning detour, Powell decided to share her experience. After being posted online, it quickly went viral.

With over 319K shares, this post from Love What Matters blew up quickly.

According to Statista, there were over 650K (full-time) U.S. law enforcement officers at that time. That day, Powell had run into just one of the many that go beyond the call of duty and have a heart of gold.

“I was late for work lol but it was truly worth it. Couldn’t ask for a better way to start my day.”

Watch the entire video yourself below and please share with your friends and family.