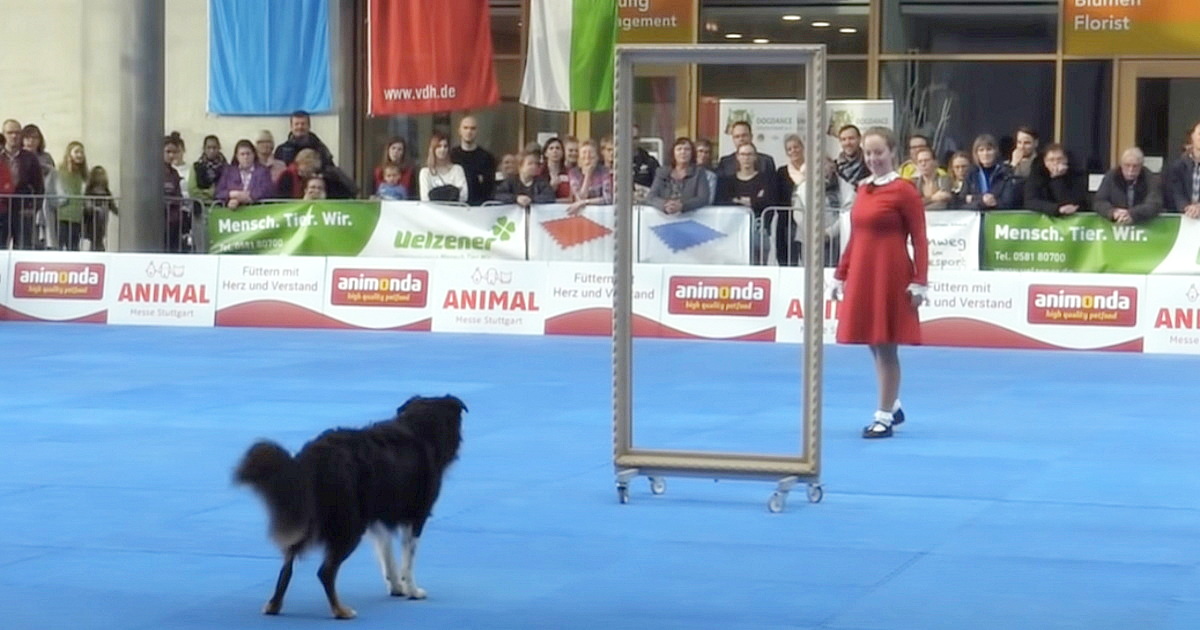 Elke Boxoen is a Belgian dancer who loves to dance in competitions with her dog, Jessy.

She was born on October 6, 1985, so you could say that this young lady is quite accomplished in her respective field.

She’s won many compitions over the years.

In 2015, Elke and Jessy won bronze at the European Championships in Prague.

Then in 2016, the dancing duo became European champion.

Fast forward to November 2017, they were crowned world champion in the Freestyle discipline of the same sport.

Elke and Jessy step out and begin their routine, but it’s not just a dance though.

It’s them telling a story along to the song’s narration.

Her passion for animals began on the farm where she grew up in.

She spent 25 years working with dogs and horses, and soon, Elke specialized in relationship based training between dog and handler.

She does many of her trainings with modern hands-off techniques.

Elke is very passionate about dogs and have included them as a part of her professional life.

It was a few years ago when the dog dancer started a training center called, “Dogz Devotion Academy”.

Her hardwork translates to this dance with Jessy.

They’re using a mirror frame on wheels, and whatever Elke does, Jessy mimics as if he’s her reflection.

It’s such a brilliant moment, you can’t help but hold still and wait for what’s next.

When she steps forward, the dog follows.

A twirl later, and Jessy spins as well.

Elke moves a few paces back and the dog does the same, this time to music that’s a little creepy to listen to.

You have to wonder how long it took for Elke and Jessy to rehearse this routine. Dogs take awhile to learn you know!

Elke’s dog expertise has her using all her skills in training and behavior, resulting in fine dogs like Jessy here who has the audience watching his every move.

Viewers are loving this performance with comments such as,

“What a connection between the two! Never have seen this type of coordination before. A great performance which demonstrated the respect they have for each other. Amazing!!!”

“Incredible. Absolutely amazing. These collies are truly so very intelligent. The time and effort put into this is awesome.. I bet Jessie can even do the morning crossword too.”

Now watch when Elke runs towards the mirror with Jessy doing the same, as if they’ll hit each other.

But Elke stops right in front of the frame, her dog doing the same.

The storytelling is unreal, their movements on point with the music and sound effects.

And then they switch as a frenzied dance ensues, with Elke somehow ending up on the other side of the mirror.

The end is something you need to see for yourself.