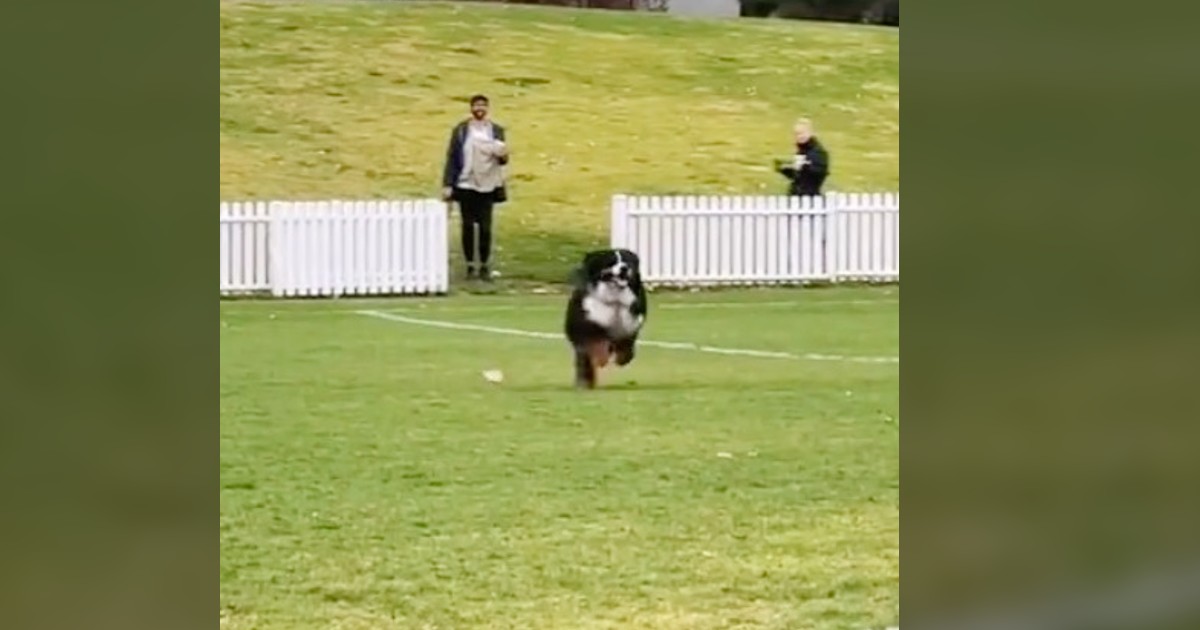 Mack is a Bernese Mountain Dog from Adelaide, Australia who absolutely loves his momma, Jo Templin.

The only thing Mack loves more than his momma is his best friend, Bowser, or “Bow” for short.

So, when Templin asked Mack if he wanted to go see Bow after spending weeks apart, he couldn’t have been more excited.

Mack immediately cocks his head to the side and looks very eager to do so.

Not only did Mack seem to know exactly who mom was talking about, but the sweet Berner looked like he couldn’t wait to see his buddy!

“Look at his eyes when she said ‘going to see his best friend,’” one of Mack’s TikTok fans wrote online.

When mom and Mack arrived at a local field, they called out to Bow. Mack eagerly looked around to see if his friend was there.

But Bow wasn’t there yet. So, Mack just sat down and patiently waited for his buddy to arrive as he longingly looked at other dogs who were playing in the field.

He could have played with that other dog, but that dog just wasn’t Bow.

But before he knew it Bow had arrived and spotted Mack from almost a football field’s length away.

Bow came running at full speed down to the field with his adorable prancing/hopping-like run. The look on his face was just too precious. He was so happy to see his buddy again!

“It’s definitely a thing that Bow does. Mack doesn’t gallop like this. It’s so cute I swear all four paws are off the ground,” she said.

Mack then came from the opposite direction and sprinted toward his buddy.

These two cuties just jumped up and down when they finally met in the middle.

They circled each other a bit. And exchanged a few kisses. These two were beyond overjoyed.

They were just brimming with happiness. After they said the initial hellos they just had to run back over to say hi to each others’ moms. These are quite the polite pups.

“They are really kindred spirits together,” Templin wrote on TikTok. “We love Bow so much too, he feels like part of our family. The mommas are half the relationship too aren’t they?”

They are especially gentle with children, great with other dogs, and often get attached to a specific human.

While their size can be imposing, they are far from threatening and are known to be very playful as you can see with Mack and Bow interacting.

Mack’s personality is as big as his size. He has more than 38,000 followers on Instagram and 49,500 on TikTok. But there’s nothing better than seeing him with his best buddy.

Check out their happy reunion in the video below.