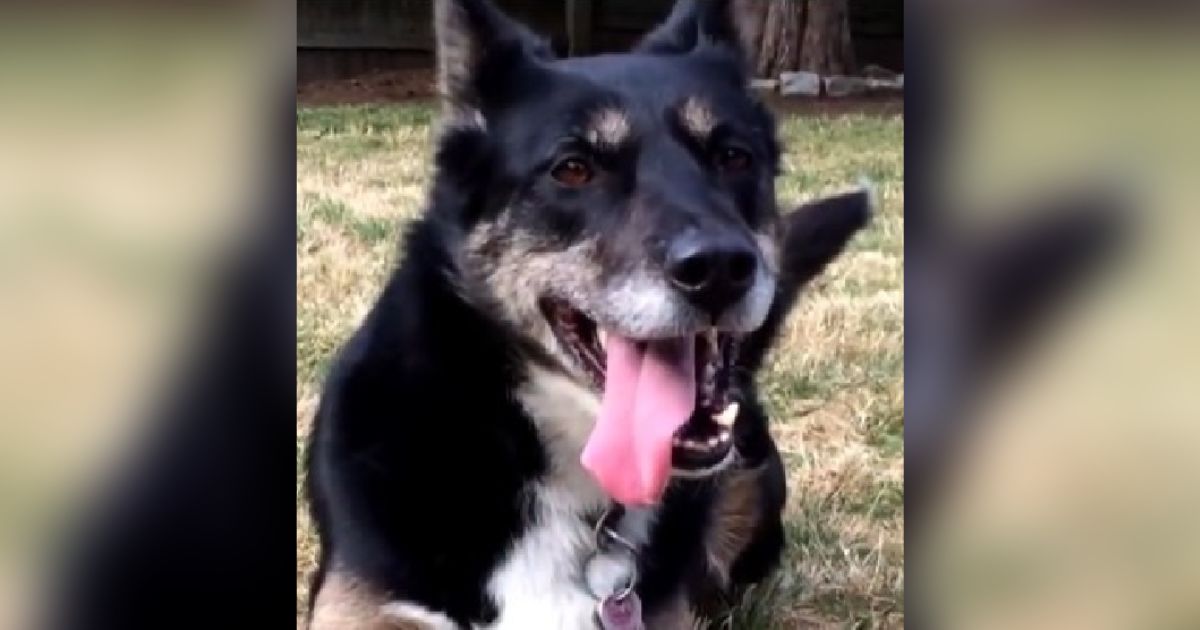 “Ruby ran right into the living room and left me a present.”

That’s how Trooper Dan O’Neil’s was first introduced to his new K-9 pup.

She was an 8-month-old Australian shepherd mix who had just been saved from the animal shelter for being “unadoptable.”

Everyone loves puppies, but poor Ruby must have been the unluckiest puppy in the world.

She’d been returned to the animal shelter no less than five times for being too much of a wild child.

Unfortunately, that fifth failed adoption was going to be her last!

Although it broke their hearts, the staff had no choice but to put her down for good.

Thankfully, a volunteer/trainer at the shelter named Pat made all the difference.

She sensed that the little stinker was actually pretty smart underneath that rambunctious coat of hers.

In a last-ditch effort to spare her life, Pat contacted the K-9 unit at the Rhode Island State Police to see if they would take her in.

She figured that since no one else wanted Ruby, getting trained as a K-9 dog might be her only hope!

Lucky for the pooch, Officer Dan O’Neil always wanted to be in the K-9 unit.

The only problem was, he could never get his foot in the door because he needed a doggy partner and didn’t have one – until now.

What neither Dan nor Pat knew was that by giving Ruby a new lease on life, they were about to start the ball rolling on what author Squire Rushnell calls a “Godwink.”

When Dan first brought the pup home, she immediately ran past his pregnant wife and left a stinky first impression on the living room floor.

Although things weren’t exactly off to a good start, this was Dan’s only shot at getting his dream job, and it was Ruby’s last chance to redeem herself.

For everyone’s sake, this new partnership had to work!

Thankfully, Ruby grew out of her ornery puppy behavior, and she proved herself to be one of the finest K-9 dogs the Rhode Island State Police force had never known!

During their seven years together, Ruby and Dan had been on 10 different missing persons cases, and in three of those instances the people were thankfully found alive.

It was one of their most recent cases that brought Ruby back to the very beginning of her story.

It was when she was just two hours away from being put down.

This was the sweet Godwink moment that connected everyone together in ways no one could have imagined!

When a teenage boy went missing from his home in the town of Gloucester, Officer O’Neill, another trooper, and their two dogs were tasked with finding the young man.

The boy’s frantic mother told them that her son liked to go hiking in the woods, so the pair decided to split up in order to cover more ground.

As soon as Ruby caught a familiar scent, she bolted down a ravine.

When Dan finally caught up with her, he found her licking the face of a body that was lying face down on the ground.

The young man had been injured and barely had a pulse, but thankfully he was able to make a full recovery after he was rushed to the hospital.

It was Dan who drove to his mother’s home to deliver the good news, but it was no coincidence that he was the one to do so.

Mom was very thankful to hear the good news, but then out of curiosity she asked Dan about the fate of a K-9 pup she helped save years ago.

“Do you know of a dog named Ruby?

The trooper was taken aback, and said that yes, his dog was actually named Ruby.

That’s when she introduced herself at Pat Inman, the trainer who tried to rehabilitate Ruby when she was just a pup!

Although no one realized they were playing an important part in this remarkable story, it had finally come full circle.

Pat helped save Ruby from meeting an untimely end, and seven years later, the grateful doggy returned the favor by helping to save the life of her son.

That, my friends, is a Godwink!