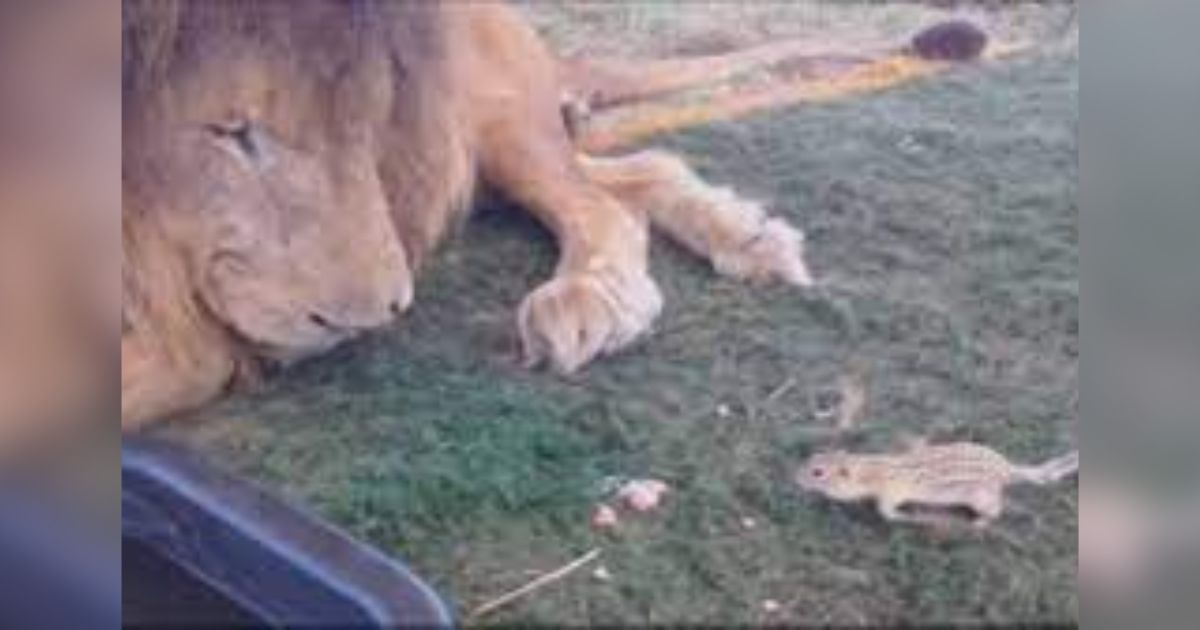 The squirrel started coming around more and more often, so the workers captured this adorable interaction in a video that quickly went viral.

An animal pair found themselves on the news thanks to their pretty unconventional interaction. The cast of characters in question consist of a tiny rodent and a powerful predator.

This is Güero the Lion and a squirrel that’s become a ‘friend’ of sorts to him.

Güero’s tale began in the cramped, inhospitable cages of a Mexican private zoo. The tight and undersized living space was a far cry from the open grasslands that his species come from.

Zoos are normally great places for animals. They offer shelter, food, and protection for a lot of threatened species. So as tempting as it is to think zoos are just a prison for the animals, the reality is pretty different.

This is, of course, speaking for good zoos. A good zoo can save species from extinction by having members of a species that are still ready to breed. They’re also a great way for the public to see the invaluable beauty of the natural world, and what it means to protect it.

But the zoo Güero came from wasn’t a very good one, judging from his injuries.

Güero had worn teeth and a severe neck injury. The years of neglect also left a clear mark on the lion’s mental health. Güero was depressed and not nearly as energetic or lively as a lion would be.

Güero was rescued by a Colorado-based group, ending the years of neglect.

Now that he was in the US, it was time to help the lion get back on his feet. Güero now had proper healthcare and a wide living space. It may take some time for him to fully recover, but small progress is still progress.

The wild Animal Sanctuary where he stays ensures that he gets the best of care. Good for him!

One of the more noteworthy parts of Güero’s story begins here. It’s the squirrel he met.

A lion is several hundred, or even several thousand times the size of a squirrel. So what business does this tree-dwelling rodent have with the lion?

” Turns out Güero and the 13 striped Ground Squirrel are buddies and Güero is purrrrfectly fine with the little guy sharing his food.” – the sanctuary wrote on Facebook

An African lion is easily around 400 pounds as an adult, yet Güero doesn’t lay a finger on the squirrel.

What could the reason be? It might be tempting to project human emotions onto an animal, but that’s not such a good idea even if it’s occasionally the case.

How sure are we that Guero is friends with this squirrel? Well, it’s not that crazy.

As dangerous an animal as a lion is, Güero ‘s attitude from his years of neglect and rehab might be playing a part here. He might not be as hostile to the small critter as a wild lion might.

It’s also likely that the squirrel is too small for Güero to bother getting mad at. So “friend” might be right here.

“Every day Güero loves to get a little whipping cream after he finishes his meat, and the squirrel has decided he likes the whipping cream just as much! It’s been a scene we see repeated more and more often, and we wanted to share the “sweet” bond they have with you!” – the sanctuary continued in the post

And unconventional bonds with big carnivores have happened before!

Look no where else than the story of Baloo the bear, Leo the lion, and Shere Khan the tiger. The trio from Noah’s Ark Animal sanctuary formed a bond, that they proved to be very real.

The circumstances they grew up in made the bond possible. That could very well be what happened with Güero and the squirrel.

This should go without saying, but these are rather exceptional cases and I would not recommend trying to force a friendship with a wild carnivore. I’m not Mowgli, and neither are you. But when it does happen on its own, it makes for a very good story to read.

Click the video below to watch this squirrel and lion’s adorable interaction!