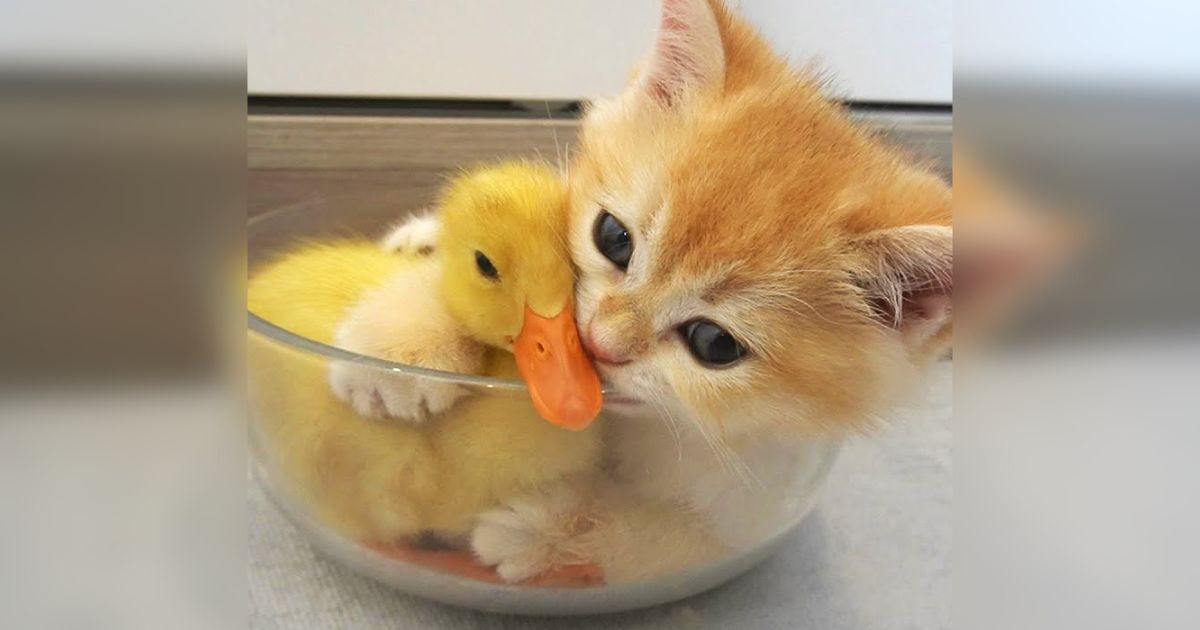 Have you ever seen a kitten that is too attached to a duckling?

It is unusual to see a deep connection between a duckling and a kitten.

However, you will be amazed by how this tiny kitten shows affection towards his duckling friend.

At the start of the video, you can see how much the kitten loves being beside the duckling.

They even managed to cuddle inside a bowl.

Even though the space was cramped, it did not matter for the two friends.

They bonded in it anyway.

He even gave the duck a peck on her cheek while hugging him tightly.

The duckling does not mind being around the kitten.

He loves to lick her.

Kittens tend to lick themselves. They also lick other cats due to many reasons, such as grooming.

Cats lick their companions to show that they honor them and consider them family.

“Once they have come to care for you, they will treat for you the same way as any member of their group.”

Loki made sure that he made his friend know how much he loved him by licking his feathers most of the time.

It can also be seen that he looks at the duckling lovingly and rubs his head against her.

These are just some of the gestures that Loki made to show his love for his chosen companion.

He even gave some love bites.

Being playful as a kid, Loki nibbles on her beak.

Loki continues to lick and nibble all over his friend. However, the duckling took his affection differently.

The duckling then tries to break away from Loki’s paw.

Loki hugged his friend tightly and did not want to let go despite its resistance to his presence.

He secures him by putting his paw over her body.

The duckling escaped from Loki’s hug.

While grooming himself, the duckling walked away from his side.

Not paying keen attention to the duckling, Loki raised his paw, and his friend was able to break free from his hold.

After noticing that his friend had already left, Loki looked over and tried to take hold of her.

His friend missed his company.

After leaving Loki’s side, the duckling came back to his friend.

She went back to her friend and snuggled up again inside the bowl.

Loki hugged her again, and they just stayed together.

Afraid that his friend might leave again, Loki secured his friend’s body with his paw and placed his head near hers.

After some time, they cozied up.

The two friends suddenly felt sleepy after staying in each other’s company.