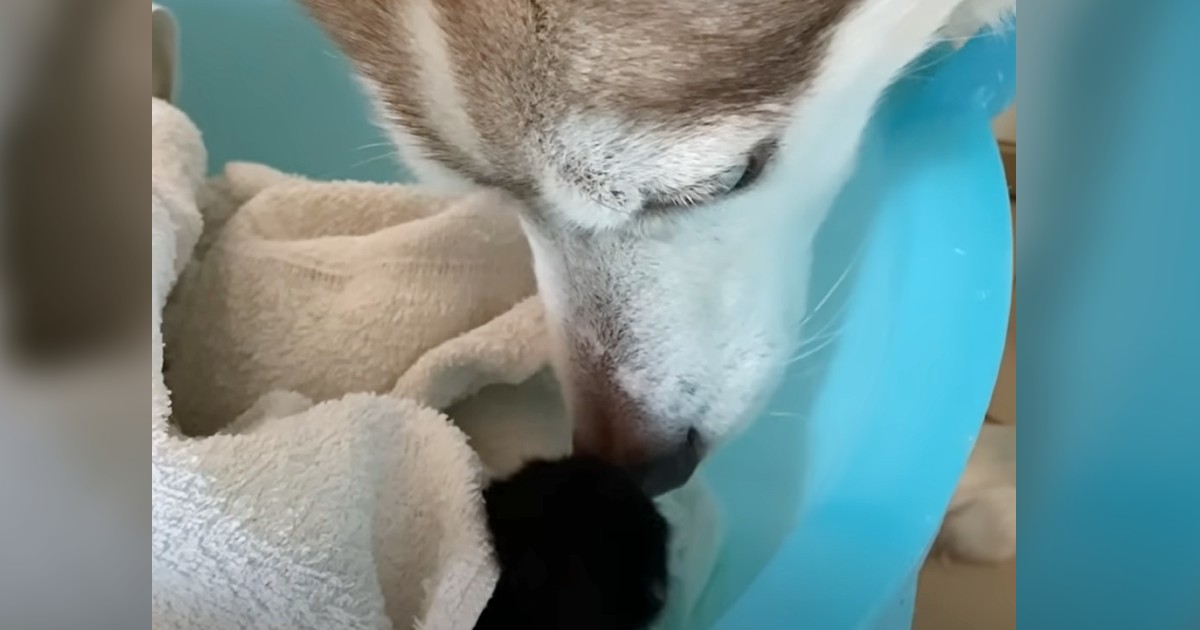 When his human found him, a kitted name PiediNo was a “tiny fragile ball of fur.” She found him in the countryside, abandoned and without one of his legs. It was heartbreaking.

“I had never seen a kitten in his condition,” she painfully recalled. “Holding him in my hand scared me.”

PiediNo was in a lot of pain.

She would hear him cry randomly from all the pain the poor kitten was experiencing. Her human would pet his head to calm him down.

If you’re wondering why they named him PiediNo, it’s because the name is Italian for “no-foot.” Isn’t that the cutest thing?

PiediNo’s family showered him with lots of love.

Sharon, their husky, took the time and effort to get into PiediNo’s good graces. The kitten would initially hiss at her, but she remained patient.

“She had actually mothered many of my other foster kittens,” the woman said about Sharon, “But with PiediNo, she was especially caring. I think she knew he was sick. She grooms him and lets him sleep near her belly.”

One day, the disabled kitten started walking. To make it easier for him, they created a “boot” to replace his missing leg using an old glove.

Despite his condition, PiediNo turned out to be a ball of energy. He always loves to play and he doesn’t seem intimated by Sharon’s huge size.

He felt safe around the husky.

“A few months later, PiediNo got hurt playing and started to feel more and more in pain. The vet needed to amputate his bad leg,” their human recalled. “Sharon was nervous while PiediNo was gone, but she was right by his side during his entire recovery.”

Sharon understood that PiediNo wasn’t in his best shape and she did all that she could to help her get better as soon as possible. They are the best of friends.

Fortunately, PiediNo recovered in no time.

And when he did, he became even more affectionate and playful. He now has all the strength and energy to play and be naughty.

He would tackle Sharon and wrestle with her like there was no tomorrow and people on Instagram adored their videos. In fact, one of their posted videos garnered 2M hearts!

Despite PiediNo’s naughty ways, Sharon would remain gentle to him. She’s the best big sister anyone could ever ask for.

His recovery was a ‘miracle.’

“Now that he’s healthy, we can go on small adventures,” she shared. “His bond with Sharon was just so special, we had no choice but to adopt him.”

What initially was just a plan to foster PiediNo ended up in this beautiful adoption. Sharon took her in and decided for everyone. Now, the kitty has found a home where she’s given all the love and care she needs.

Despite her missing leg, we are sure that PiediNo will live a happy and wonderful life with Sharon and the rest of the family.

Check out the video below to witness PiediNo wrestle with the giant husky.