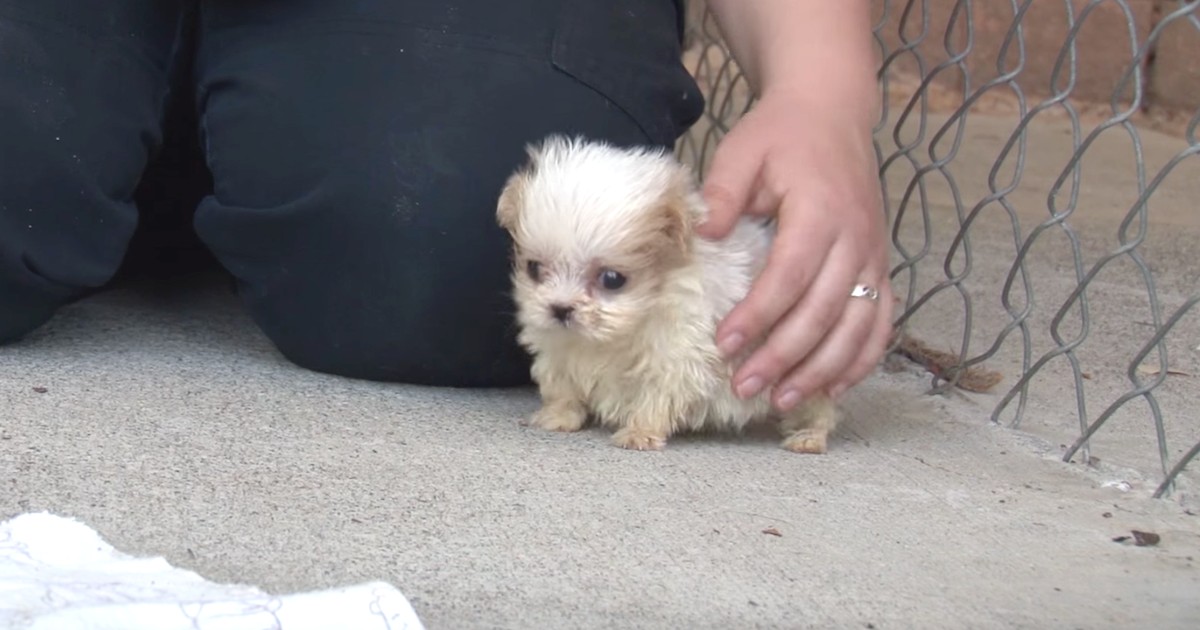 This tiny puppy has the biggest smile when he’s playing with his feline best friend. They grew up separated but they are more than happy with their new families.

No one likes to feel alone, and that is what most of us feel the second we step into a new and unknown environment all of a sudden. The same can also be applied to animals, especially when they are taken to a place that they are unfamiliar with.

This tiny puppy rescued from a puppy mill has a story to share.

Ruggles, a tiny Shih-Tzu puppy, was rescued from a puppy mill. The puppy is so tiny that it’s only slightly bigger than an average adult’s hand. This puppy really had a rough start in life, and you could just imagine how scared and anxious he is after living in such a horrible place. Rescuers from Cherokee County Animal Shelter took him home and cared for him.

All he needs was a friend his own size.

Adjusting to a new environment takes time for anyone, even for a puppy as tiny as Ruggles. At some point, he might have felt frightened or anxious seeing a whole new world outside the puppy mill.

However, the shelter had something prepared for him in this situation – a friend. They brought out Chompers, a kitten that was found alone under a porch when she was only two days old, and introduced her to Ruggles.

The wholesome video shows how they met for the first time.

Like all pups and kittens, they are quite active and playful. The first time they saw each other, they already hit it off. They played with the toys that were scattered on the floor, and not even once did they become uncomfortable with each other’s company.

It didn’t take long for them to leave the toys alone and instead played with each other naturally. They became such good friends that you would think that they already moved on from their horrible past.

Both of them were able to live their lives happily.

After a few months, they weren’t the same unfortunate pets unlike before. Ruggles was able to overcome his severe health issues and transformed into a handsome puppy. He was adopted from a loving family. Furthermore, he became the official ambassador for the Cherokee County Animal Shelter.

He helps them by visiting schools to educate kids about puppy mills and shelter dogs along with his pet parent.

As for his feline sister, Chompers, she was also adopted but not by the same person. However, they knew for sure that Chompers is satisfied with her new family.

They explained why they couldn’t be together. The uploader wrote on the description:

“For those wondering why they were not adopted together… that was the shelter’s original plan, but Chompers (true to her name!) became too rough with little Ruggles, and due to his health problems, it was determined that it was in both of the animals’ best interest to be adopted separately. They are both happy and very much loved!”

Why are puppy mills bad?

Ruggles was from a puppy mill, and surely after seeing his poor condition, you could just imagine how bad the environment was for him. For those who don’t know, puppy mills are like a breeding farm where mother dogs are bred constantly to produce pups.

That said, puppy mill pups could develop serious health issues that are difficult to treat. The worst thing is, you could never know if the environment they are living in is completely safe.

This is the message that Ruggles and the Cherokee County Animal Shelter wanted to spread. Most importantly, “Adopt, don’t shop.”

Check out a sweet video of Ruggles and Chompers playing below!