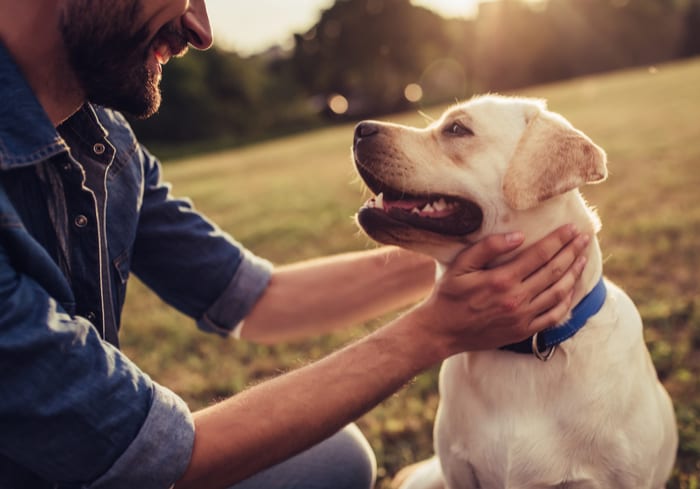 You are already used to us introducing you to some brave and courageous people every day, heroes of today, who are quietly helping abandoned animals at the mercy of humans somewhere in some part of the world. Today we meet a man named Ken Wyrsch, a soldier who was stationed in a US military camp in Iraq during the Kurdish fight against ISIS. Ken was a volunteer who helped his colleagues where he could.
This kind of work brings stress almost daily, the pressure is almost at its peak, both physical and mental health suffers. To reduce this chaos, the soldiers tried to find some medicine for themselves, if possible an animal, preferably a dog. The reason for this is obvious: no one takes better care of its owner than a dog. Dogs are man’s best friends, for better or for worse. The dog Ken named Ollie was his faithful support, he fought with him, and he also gave courage to other soldiers, reduced their stress and reminded them in every free minute that after every evil comes the simplicity of life. Ken found Ollie as a stray dog, and in a way, fate brought them together when they both needed it most. For Ollie had wandered into the camp in search of food, and they agreed that the dog would stay there. 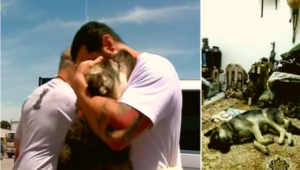 “He just caught our eye then. He was there when we left our missions, he was there when we came back,” Wyrsch revealed in an interview with CBS SF.
Everything has a beginning and an end, so this conflict ended and the unit Ken belonged to was disbanded, which meant he had to return home. The news of his return home was good news, news that every soldier waits for with uncertainty, but at some point Ken had to face the truth that he had to part with his little friend. He had only one thought in his mind: “I have to find a way for Ollie to come with me.

A month later, the soldier learned that his unit had been disbanded.

While the news of going home was usually good news for any soldier, Wyrsch could only think of Ollie. Each of the men loved the dog, but when it came to Ollie and Wyrsch, the two were practically inseparable.

Separation meant returning home, and that also meant leaving Ollie. Wyrsch, a soldier to the end, was determined not to leave a single soldier behind. He wanted to find a way to bring the brave dog home.
“You don’t leave a friend behind. You can’t do that,” Wyrsch said.

The only institution that could help him was SPCA International, which he contacted as soon as he returned to the Gulf of California. He explained to them that little Ollie was at the mercy of the road in Iraq, hungry, without people and with terrible dangers lurking on all sides. The SPCA responded positively and everything went according to plan. The day of the reunion of the two friends was set. They know that this will not be easy, but those who want to will find a way.
It cost a lot of money to bring the dog to Ken. A big thank you goes to the people all over the world who donated money after this story broke on the internet.

A month later, Ollie was in his new home in Bay. Wyrsch was waiting at the airport for his best friend to arrive. When the dog caught sight of his rescuer, there was an explosion of joy and excitement. 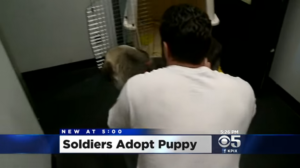 “He grabbed me with his mouth when he saw me. It was great. Oliver was so hungry and thirsty that he didn’t eat or drink until later that night. He was too excited,” Wyrsch told the SPCA. 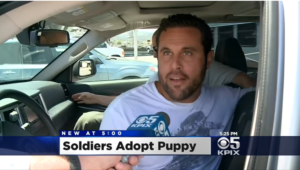 The dog Ollia was accepted by the whole Wyrsch familly, he became everyone’s favourite and even the neighbourhood’s favourite. He took him everywhere with him to drive away his memories of the bad days of the war. Ollie now spends all her time with Ken.

Watch the attachment to this story in the video below: