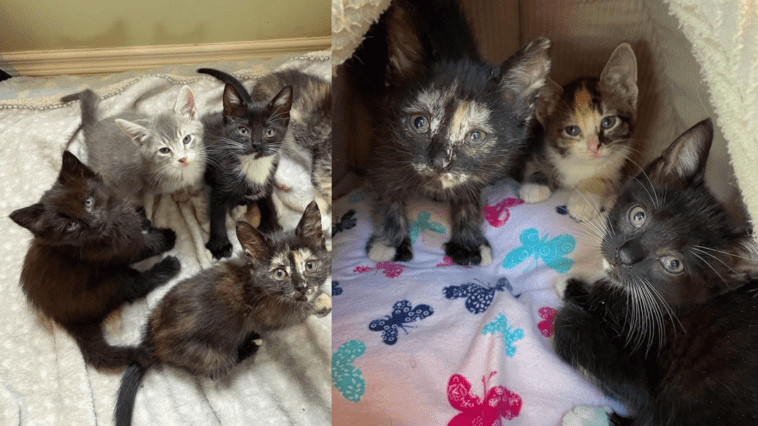 New fosters have arrived! These girls are three of SEVEN! I have four of them now and the other three will be joining us soon. They were born outside to two feral moms so they’re a bit weepy eyed and sneezy, they have lice, and their tummies are getting used to solid food. I think they’re around 6 weeks old. Oh, and some of them are polydactyl. Check out the kitten mittens on that tortie!

They have decided I’m their new mom and I’m here for it. Although that could change once their desperate search for nipples turns up nothing

Babies’ first box. Nothing but the best for my fosters

The other three babies have arrived! That brings the total to seven. We added a ginger, two fluffy black babies and some extra toes to my menagerie

Gangs all here! They’re having so much fun and earned a bigger space with (mostly) good litter box behaviour! Foster Mom is having a really busy week so it’s all I can do to keep up with feeding and cleaning. Sorry for lack of updates. I haven’t named them yet but I will soon!

A couple days ago in my story I said “there’s always one” when ginger boy was hogging a toy. Well, apparently there are two. Also a boy

The newbies have names! Let’s start with the five girls… tuxie is Marianne, calico is Emma, tortie is Elizabeth, fluffy black poly is Anne, and greybie is Fanny.

Swipe left for the boys… ginger is Mr Darcy, and black fluff is Colonel Brandon. I think you can all guess the theme, am I right?!

Meet the Jane Austen kitties and hear their backstory

Do you think Marianne’s giant grabby mitts give her an unfair advantage?!

Giselle is compelled to use a little bag to conceal her exposed breasts.
The seductive new commercial for Louis Vuitton’
0 217