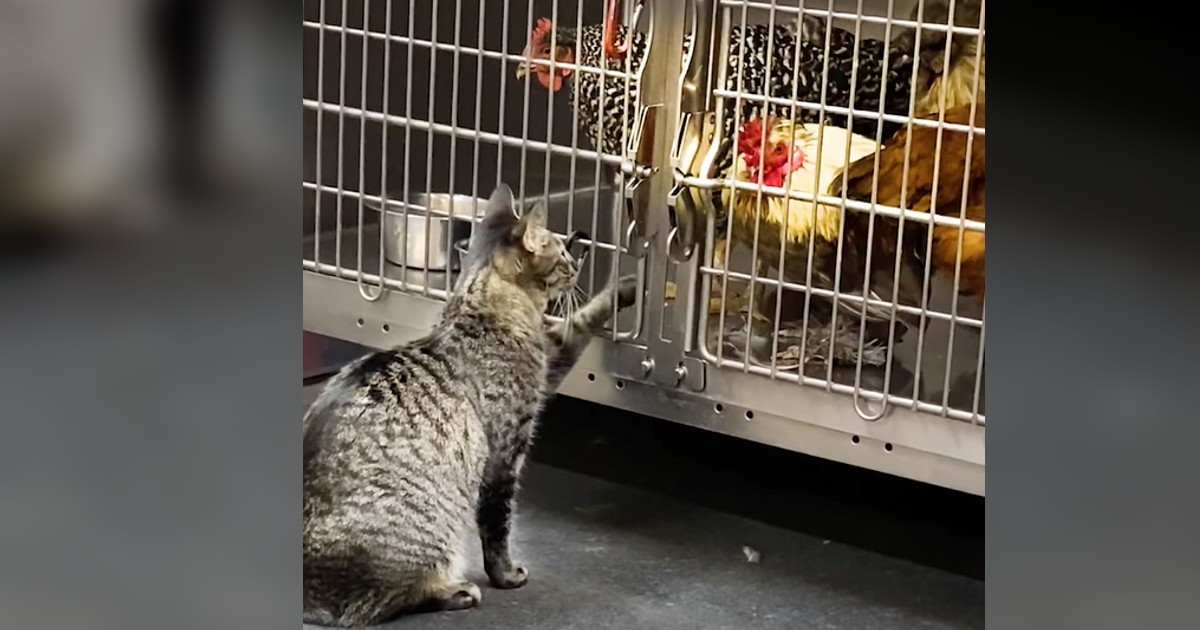 We’ve all heard about therapy dogs but therapy cats are pretty awesome too! While some cats tend to be aloof and isolating, there are kitties out there who are outgoing and they make for perfect therapy cats.

This is the story of Bea, a cat who turned out to be a therapy cat. She used to be a stray who is now a rescue cat who lives happily at a vet hospital.

Together with her friends, they are called ‘The Hospital Cats.’

When they got her, they found that she just adored being in the hospital so they decided to let her stay. She was described to be the “most playful.”

According to one of the staff, “She was just looking for somebody to roughhouse and play with.”

Bea easily stole the hearts of everyone. And then, one day, another cat came in.

Her name was Peggy. As soon as she got in, Bea would “poke her paw” into the cage where Peggy was in as if telling everyone that she likes the new cat.

Since they saw how much Bea adored Peggy, they decided to keep Peggy as well, and they instantly became the best of friends. Peggy would follow and imitate everything Bea does. It looked like the feelings are definitely mutual.

They instantly created a special bond.

“If Bea’s running around, then Peggy will run around. If Bea’s sleeping on the chair, Peggy sleeps on the chair. Bea’s touching the birds, then Peggy comes up and she’s like, ‘Oh, I want to touch the birds too,’” the staff narrated.

One day, there were chickens in the hospital and Bea looked pretty interested in them. Inevitably, Peggy started to watch over them too.

Then Peggy tries to reach out to the chickens.

She puts up her adorable little paws, imitating how Bea does it whenever any animal is around. The thing is that Bea tries to reach out and pet every animal that comes into the hospital and Peggy seemed to have caught up.

Bea would pet chickens, goats, pigs, and basically all animals she sees.

“We make sure that if an animal comes in, they are used to cats and the owner’s OK with her coming in. I like to think that she understands that, ‘Hey, I’ve been there before,’” she explained. “She just sympathizes with them.”

She would be even caught lovingly poking at animals even if Bea was asleep. Peggy was just always “calm and curious like her big sister.”

“It’s been a great morale [booster] for everybody and we’ve fallen in love with them,” the staff remarked.

Bea and Peggy are undoubtedly extremely loving animals who found their home in the hospital. Everything just worked out perfectly for them now that they get to have a home where they constantly meet new animals to give some love to.