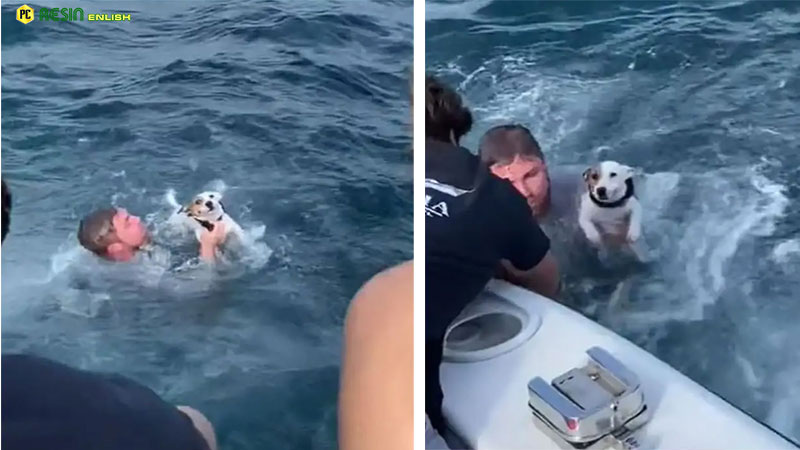 Something drew Bryn Crowell and her friends’ eye as they were kayaking off the coast of Florida. They decided to slow down and turn around to see what the unusual item in the water was.

From a distance, Bryn and his buddies assumed it was a misplaced hat, but when they came closer, everything changed. Bryn explained to The Dodo:

“My initial reaction was, “Wow, that hat looks like a dog!” After another second, I realized it was a dog!”

Nobody knew how the small dog ended up so far away from the coast, but it was clear that he was battling for his life. One of Bryn’s friends decided to jump into the water, catch the dog, and carry it to the safety of the boat.

Bryn’s buddy captured the precise moment of the rescue on video and chose to share it on social media. The episode was so incredible that it went viral almost immediately. The small puppy was terrified and surprised, but he was quite fortunate to have been discovered by the sailors.

“He looked as if he’d just swum for his life.” The young folks discovered that the dog was wearing a collar with an identity plate and his family’s information after inspecting him. So they decided to call to report his rescue, and they overheard them weeping, agitated, and perplexed in the middle of the call.

According to the family of the dog named Zuko, they had been sailing in a boat that day and had taken their dog with them. Zuko was really happy because it was his first time sailing, and he leaped every time a wave slammed on the ship. The tiny puppy went overboard without his family’s knowledge, and they mistook him for someone lurking in the boat.

They did not discover it after looking for a few minutes, so they decided to return to the places where they had explored. They didn’t work out, but Zuko was given a second start at life courtesy to Bryn and her friends. “When we returned to Zuko, we saw [his owners] sobbing and cuddling him.”