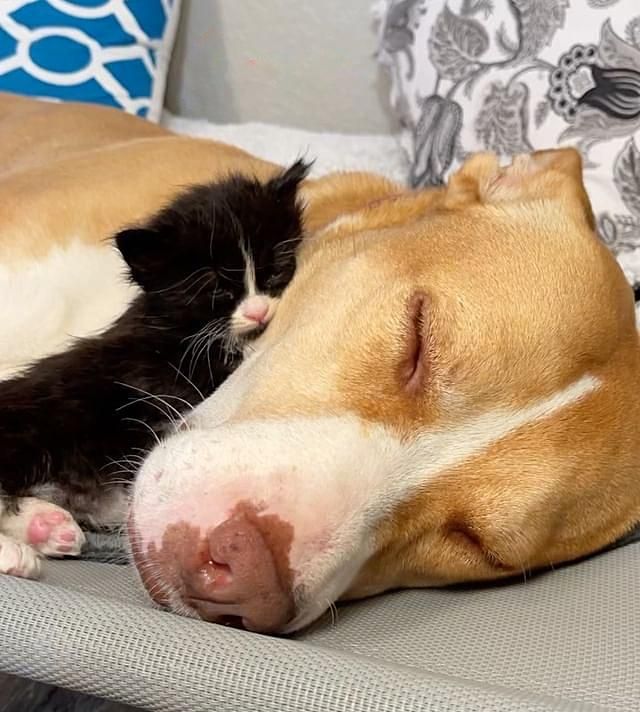 Two kittens, Encore and Pax, were just two weeks old when they were transferred from the San Bernardino shelter to Saving Pets One at a Time (SPOT). They needed round-the-clock bottle feeding, so Susan Hicks, a foster volunteer of SPOT, took them in with open arms.

The feline brothers were given kitten formula every four hours and kept in a cozy, comfortable nursery. They started waddling about, learning to walk and exploring their new digs.

Susan’s resident dog, Ginger, was beyond thrilled when she caught wind of the new arrivals. She knew just what the kittens needed. 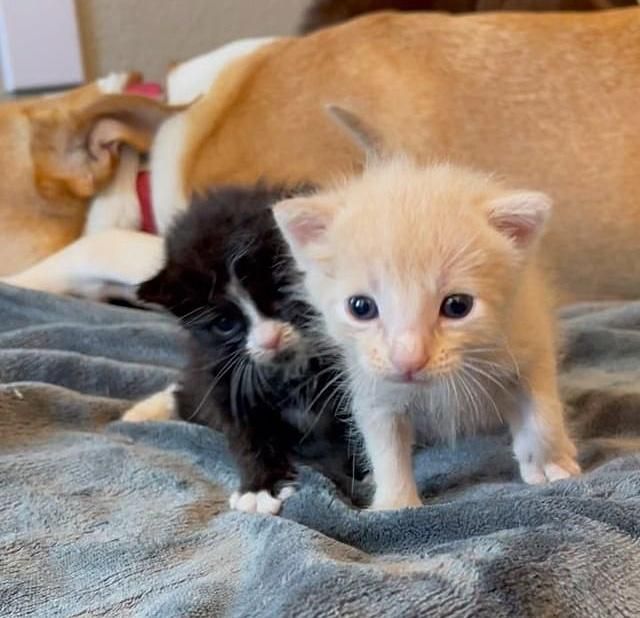 “The kittens were so young and immediately accepted Ginger as their foster mama,” Susan told Love Meow.

A few years ago, Ginger found her way to Susan as a rescued dog, heavily pregnant. She gave birth to a beautiful litter in the comfort of a loving home and raised them into healthy, happy pups.

When all of her puppies were adopted into good homes, Susan knew that Ginger had already found her happily-ever-after right then and there. 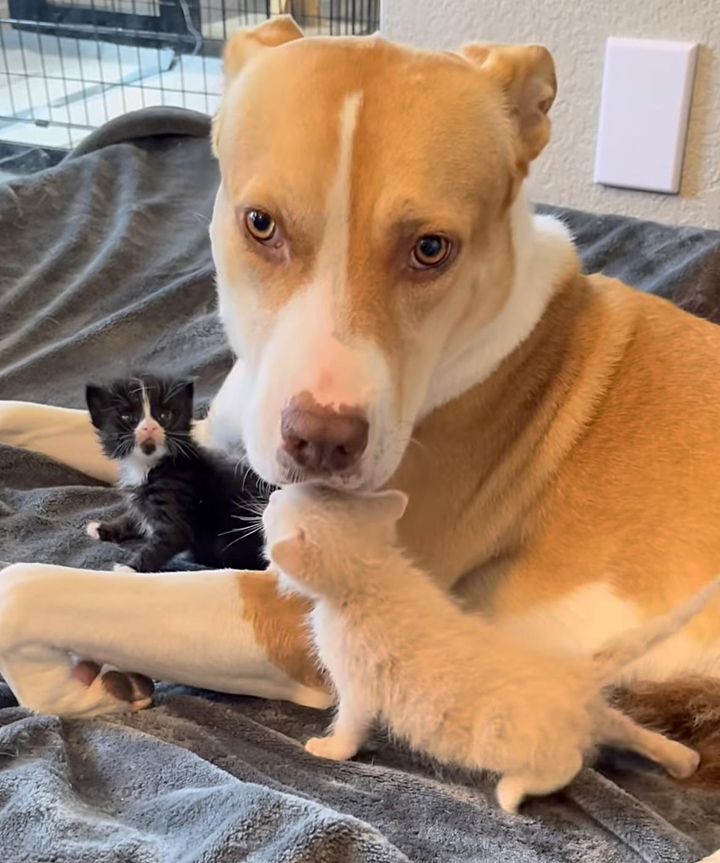 The sweet canine has since discovered her penchant for caring for little animals, especially those who need a mother’s love. She has a knack for calming down kittens, and they somehow all gravitate towards her.

After each bottle feeding, Ginger waits to assist Susan as she brings over the babies. She washes their faces and helps them potty like a mother cat would. Even the shyest kitty can’t resist Ginger’s tender loving care. 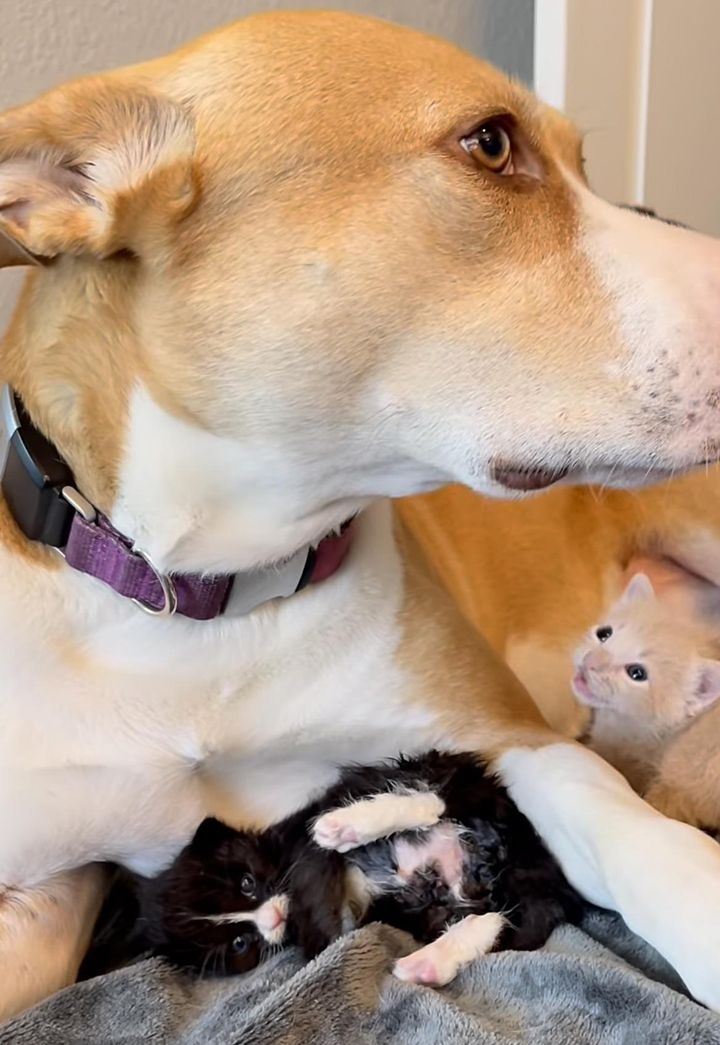 There was no exception with Encore and Pax as they approached Ginger and quickly melted into her. They latched onto their canine foster mama and nursed away in bliss.

The two became so comfortable with Ginger that they fell asleep in the midst of comfort-nursing. 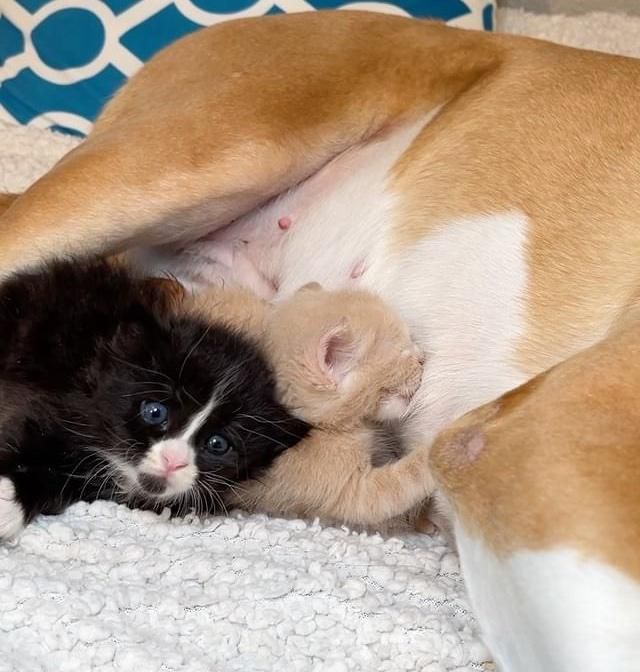 Ginger keeps the kittens clean from head to tail, and she takes her grooming duty very seriously. She makes sure that the babies are well taken cared of and gives them all the snuggles she can possibly supply.

“She seems to know these little ones need extra help. She’s generous with the warmth of her body and has been licking them frequently.” 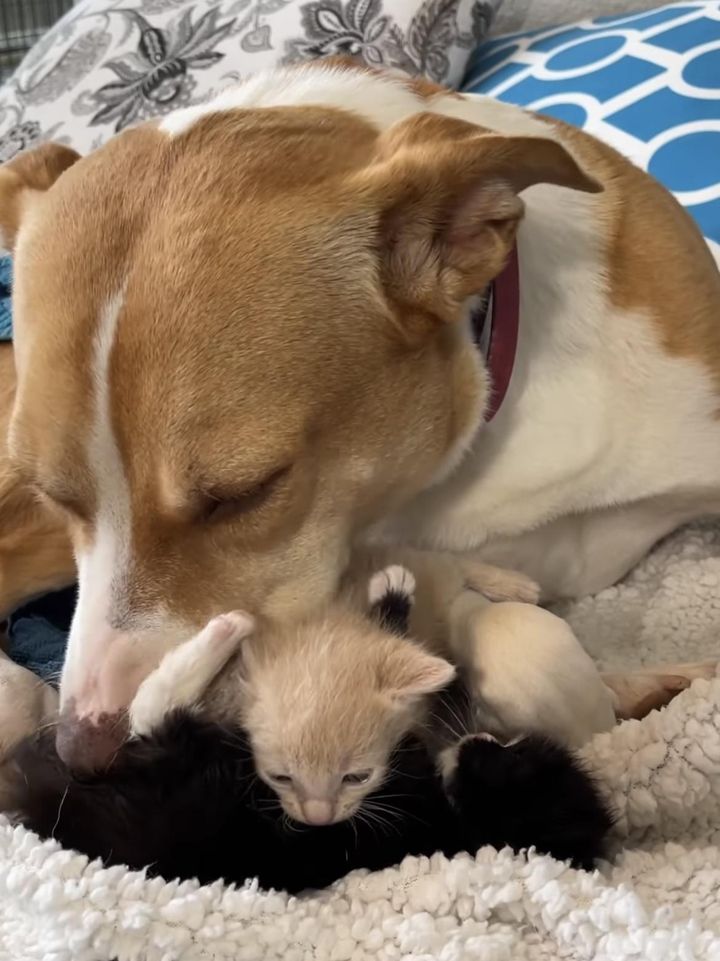 Encore and Pax, voracious little eaters, have grown by leaps and bounds over the last two weeks. They are getting more active, playful and boisterous. 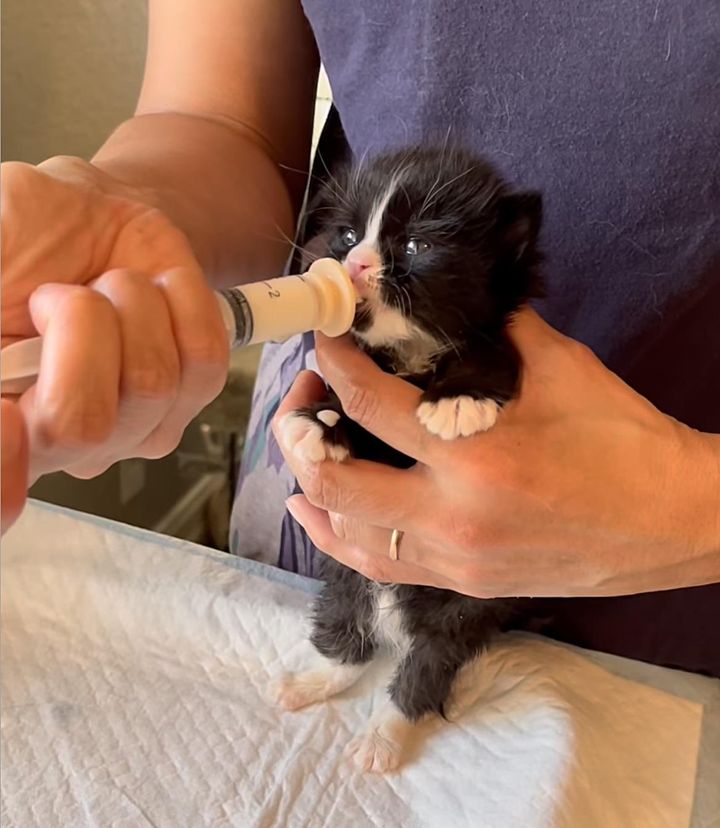 “The kittens are now almost four weeks old and are using a litter box, but Ginger is still helping them clean up,” Susan wrote.

“When it comes to grooming, Ginger is relentless. I always laugh at how outraged (Encore) acts whenever Ginger cleans him.” 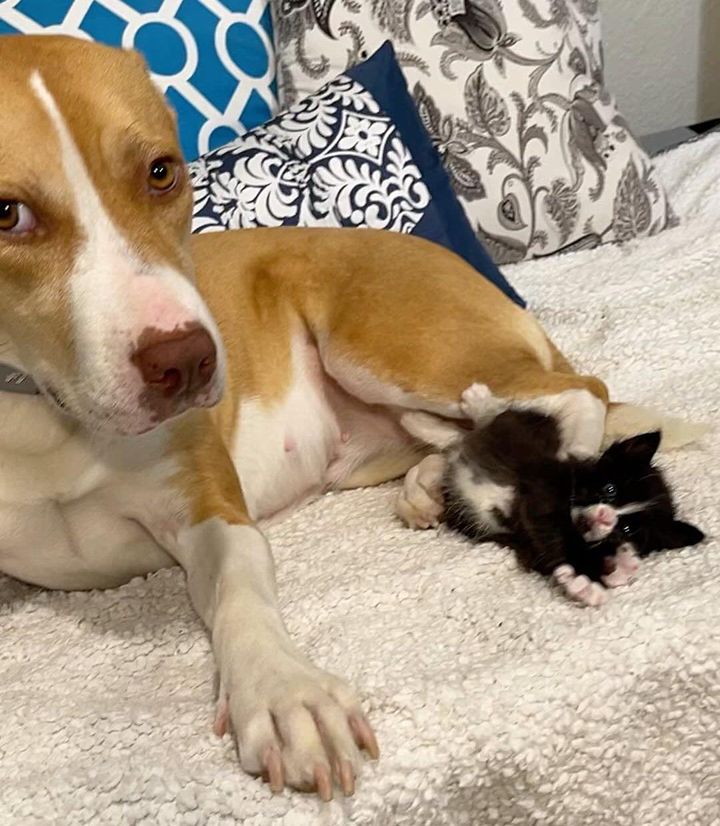 The feline brothers have progressed from roly-poly wrestling to playing with Ginger’s ears and tail. They constantly keep her on her toes, but Ginger revels in every moment with her kittens. 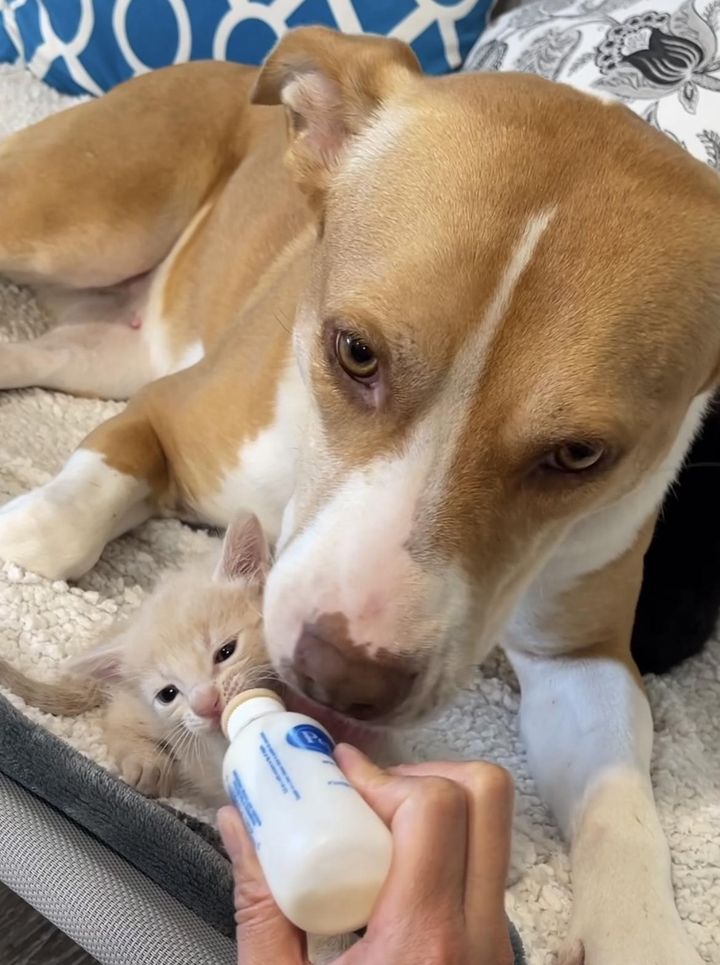 They like to play around Ginger and jump all over her. She loves every second of it and just wants to mother every fur baby that comes her way.

“Kittens are always drawn to Ginger’s floppy ears, and Pax is no exception.” 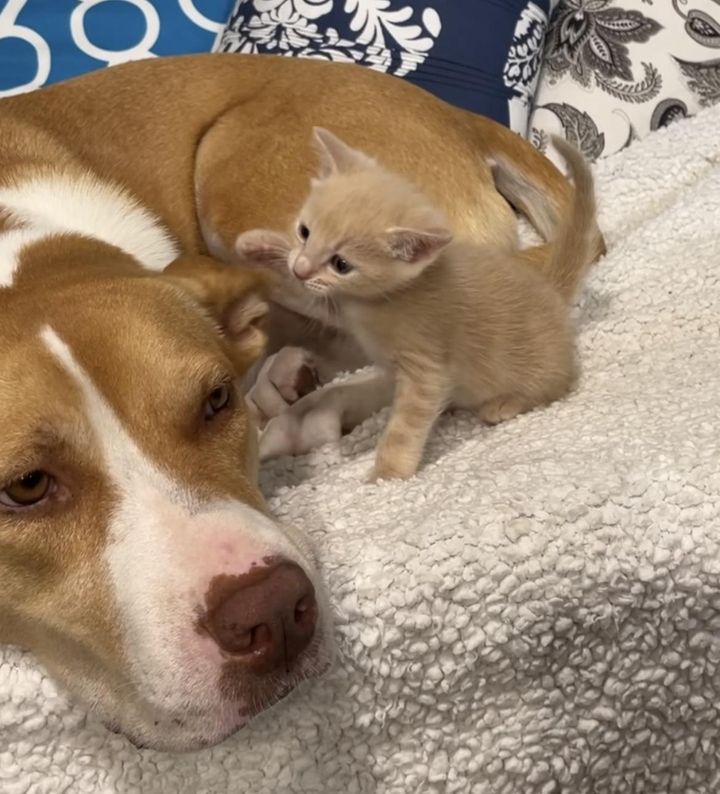 Encore and Pax are thriving in foster care with their sweet, doting canine mom. Ginger is giving the little ones the same love that she received when she was rescued. 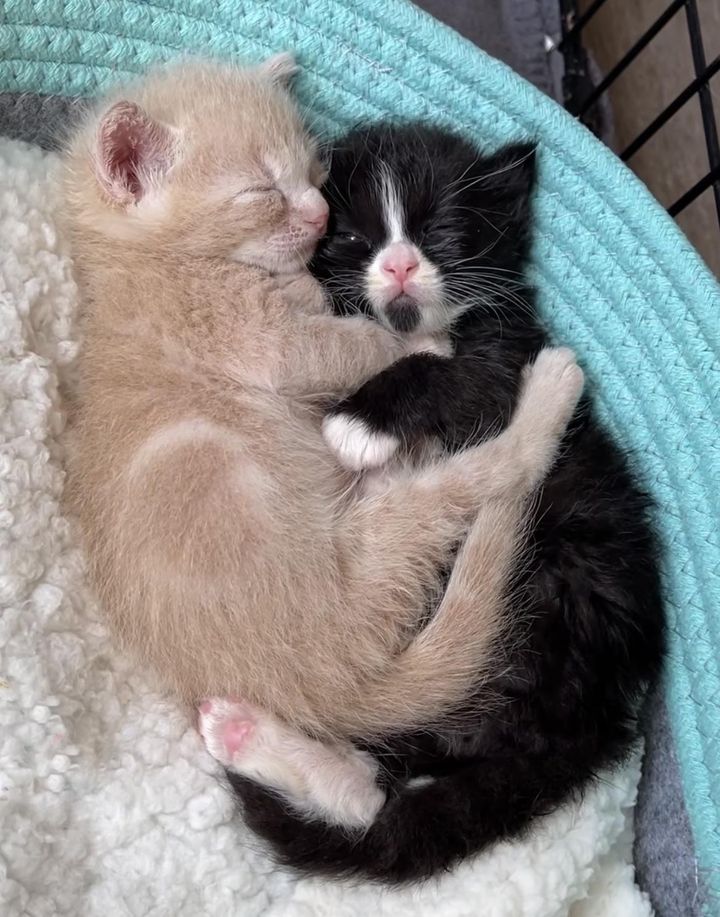 Parents of 12 working multiple jobs to support their family get Christmas miracle from stranger
What do you want to get from your Secret Santa?
0 855