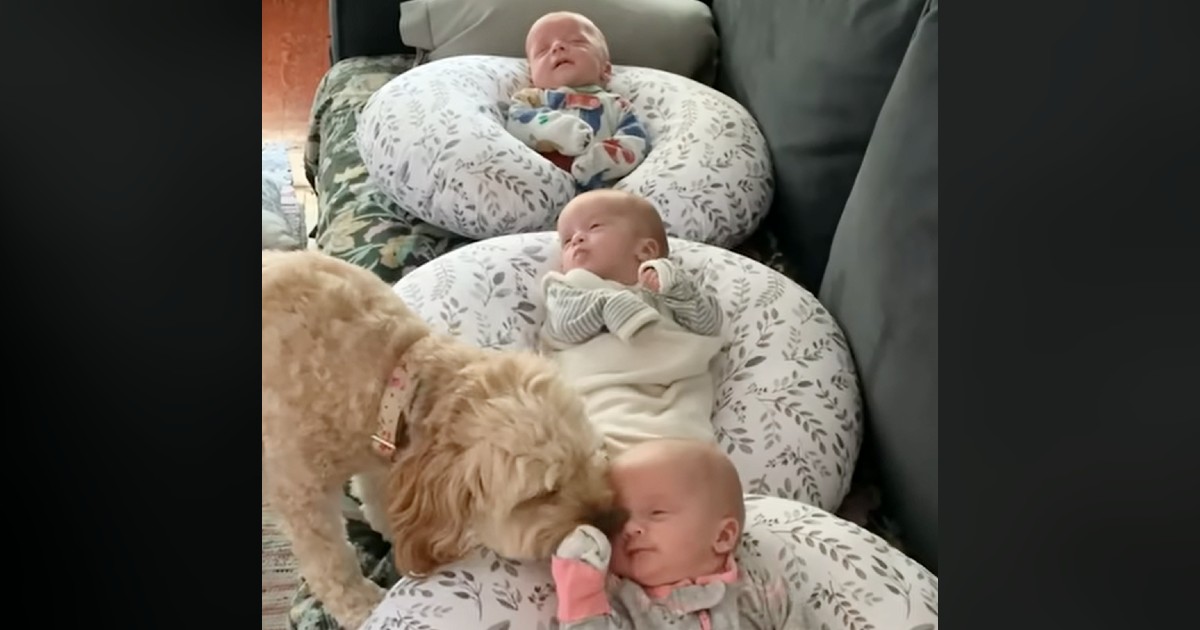 Lauren Barnes runs a full house in her Branford, CT home with newborn triplets and a mini Goldendoodle.

Let’s just say that Barnes has her hands full.

Barnes began documenting her life as a mom of triplets on TikTok, as well as her Goldendoodle’s interaction with them.

One of these videos ended up having a major “awwww” factor and wound up going viral. Barnes shared the video with Storyful, where it was viewed 3 million times on their Facebook page.

Apparently, Sunny absolutely adores the three news babies, which is evident from the video.

Barnes told Storyful that her little ones were just 2-months-old at the time when the video was taken.

The video shows Sunny affectionately attending to each of the three newborns who are nestled in doughnut pillows.

The babies are lined up on the couch behind one another while Sunny stands on an ottoman.

He leans over toward the first baby and gives it some kisses.

He looks over the middle baby to make sure everything is OK with that baby and just sniffs around a bit because we know how good babies smell.

Now it’s time to take a look at baby number three. Sunny leans all the way over standing on his tippy toes to give the baby a sniff over and a little kiss.

And he looks VERY happy doing so with his big fluffy tail wagging wildly. One commenter on YouTube joked that Sunny looked surprised that humans have “litters” too.

“Dogs are so precious when they are not abused or taught to be mean or fight. This is a very precious video,” said another commenter.

“It’s official, they’re hers too. She’ll be living out her days babysitting for these 3 munchkins,” and another.

Apparently Sunny isn’t the only dog who is affectionate with children.

“Our dog sleeps at my 6-year-old son’s feet every night. She’s been doing that ever since he was a baby. She’s so protective of him, probably because he’s the youngest of our children. Something tells me this doggy will do the same,” one commenter said.

Doodle Tips reports that it’s very common for Goldendoodles to get along well with children.

They are known to have a patient and gentle nature and get along well with other animals and children when properly socialized.

Goldendoodles will serve as loyal and protective friends to children and are also hypoallergenic.

“Goldendoodles are good with children and babies, and the gentle and loving nature of the Goldendoodle is legendary,” Doodle Tips explains. “Common sense should be exercised, though. If your Goldendoodle is full-sized, then precautions should be in place to ensure that an exuberant puppy doesn’t accidentally injure the child.”

However, Goldendoodle are very intelligent and can be easily trained to be cautious around small babies. Just like Sunny!

You can watch the video of Sunny taking care of his little babies below.