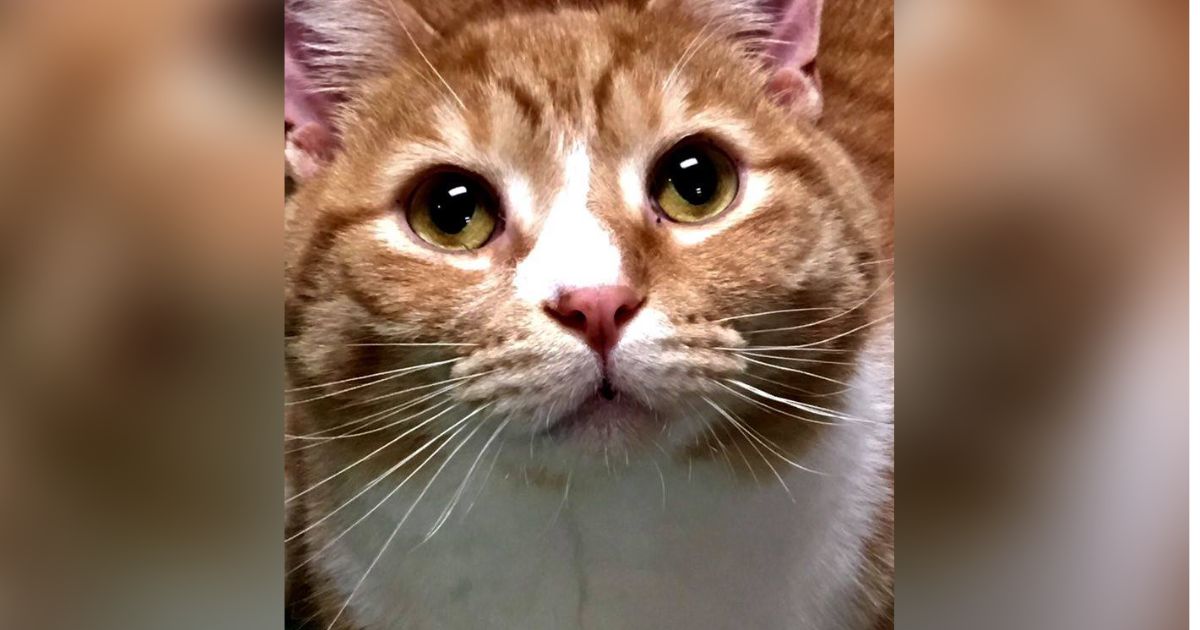 When you take one look at the sweet, sweet face of a kitty name Jacque, you will, no doubt, immediately want to hold him in your lap.

Those big green eyes instantly reveal that he is one of the goodest boys around.

But his owner didn’t think so. His owner didn’t want a cat who liked to cuddle so they gave him back to the shelter. Unfortunately, this isn’t the first time Jacque experienced rejection.

Jacque was 7-months-old when his first owner abandoned him when they moved.

“He was found in a house that was foreclosed upon. The person who owned him left him there and didn’t care,” Nancy Hutchinson, founder and president of Michigan Cat Rescue, told The Dodo. “He was found by the realtor and brought into the shelter. This happens quite often, sadly.”

Jacque was put on the euthanasia list in the overcrowded shelter and was scheduled for extermination.

But Hutchinson happened to visit that kill shelter and save him.

“I saw him in his cage and felt so bad for him,” Hutchinson said. “I opened up his cage and … sat on the floor with him for a while and he sat on my lap. I thought, ‘Wow. What a nice cat.’”

Now that Jacque was in the care of Michigan Cat Rescue, he would be put up for adoption.

He was specifically advertised as a lap cat and a woman came along to adopt him.

A year had passed before the woman returned and wanted to get rid of Jacque saying he was “annoying.”

“She said, ‘He’s constantly trying to sit in my lap — I just can’t stand it anymore. I’ll have to return him to you — this is not what I signed up for,’” Hutchinson said. “Actually, it is what she signed up for because she requested a lap cat specifically. But she just became tired of having him.”

This totally peeved Hutchinson, but even worse, it broke Jacque’s little heart.

He was so distressed that he got sick.

Jacque refused to eat for a few days and was confused and upset. The level of stress affected his immune system and caused an upper respiratory cold leaving his eyes swollen and infected.

“It hurts us that he was rejected this way,” Michigan Cat Rescue wrote on their Facebook page.

Thankfully, the staff was able to get Jacque healthy again so that he could be put up for adoption. After posting about his story, the adoption requests were flying in.

“We received a lot of applications for him, but a lot of them weren’t appropriate for his personality,” Hutchinson said.

That’s when a woman named Liz Myziuk and her husband applied.

Hutchinson had a “good feeling” about them and invited them to meet Jacque. She immediately knew that feeling was right when the couple was crying happy tears shortly into their meeting with the big orange boy.

“They were so in love with him,” Hutchinson said.

Hutchinson was relieved that Jacque finally had found a good home. And so was he. Not only did he get a brand new home but a new name, Giuseppe, so he could officially start his life over.