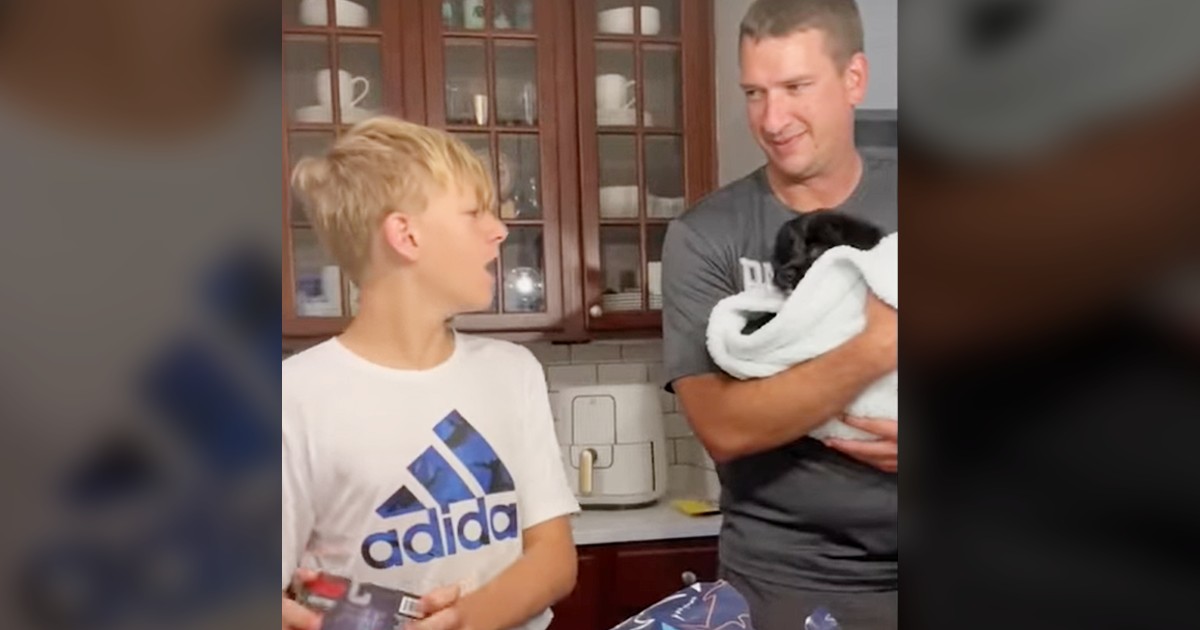 But after almost a decade, the Ohio boy finally got what he wanted.

Adam was gifted the dog he had always wanted on his 12th birthday.

His mom, however, wasn’t going to just give it to him.

So, she decided to tease him a bit before surprising him with his very own dog.

Adam’s emotional reaction to the big surprise was caught on video and had more than 30 million people in tears within two days.

The video starts with Adam unwrapping some presents.

“He’s been begging for a dog since he was 3 years old,” the text in the video states.

He smiles at the silly gift his mom gave him.

It was a basketball dog toy and a Stranger Things-themed walkie-talkie dog toy, according to ABC News.

But he doesn’t see his dad behind him, walking toward him with a puppy in his arms.

Mom, Sarah Grimpo, pretended like it was an accident and she had no idea that they were dog toys.

“Are you serious? They’re dog toys? I’m so sorry, bud, I guess you’re gonna need a dog,” Sarah can be heard saying off camera.

That’s when Adam looks to the left and his jaw completely drops.

“Happy birthday,” his mom tells him.

Adam put his hand over his heart and takes a few steps back.

And that’s exactly what Adam started to do. The sweet boy broke down in tears because he was just so happy.

The dog was named Weller. Adam said he was thrown off when he first opened his gifts.

But Adam didn’t show it because he didn’t want his mom to feel bad.

Both of Adam’s parents had worked full-time while he was growing up but his mom took on a remote job which allowed the family to have someone home with the dog during the day.

“Now that I work from home, we made the decision to surprise Adam on his 12th birthday with the puppy. It kind of all happened really fast,” Sarah said. “It was about a month before his birthday. So I just looked at my husband and I said, ‘I think it’s time.’ We think he’s old enough.”

The video ended up going viral and the family said they were overwhelmed by the response it got.

Sarah said she was just happy to see how grateful her son was after finally having his wish come true.

“I’ve always wanted a dog and so when I saw Weller, he’s a really cute dog and I was so excited just to have a new pet and everything and have a lot of memories with him,” the 12-year-old said.

Check out the video of Adam’s nine-year wish come true below.