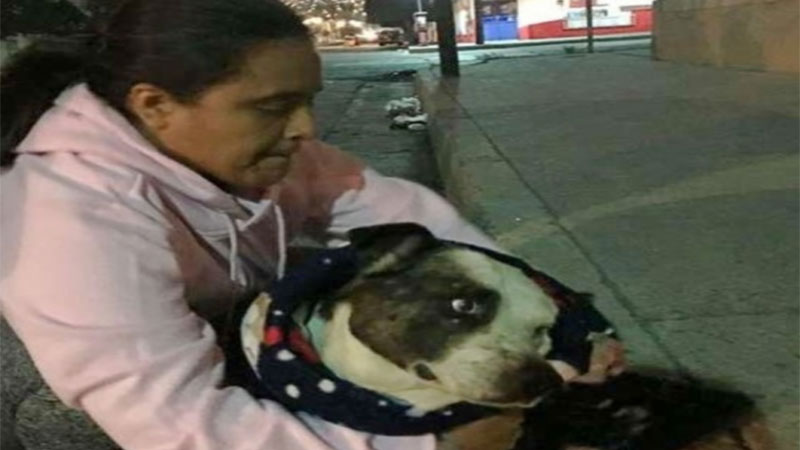 Three volunteers at a temporary spay and neuter clinic in Tijuana, Mexico, encountered a very unusual dog shortly after finishing up a hard day’s work,

It was 10 o’clock at night when Elaine Seamans, Rebeca Altamirano and Hilda Torres came upon a dog with a very strange head tilt. He and another street dog were walking along the street when the women spotted them.

These superheroes of the rescue world pulled over to help, but the dogs ran away.

Founder of the At-Choo Foundation, Seamans, told The Dodo, “Like most of these dogs who need help, he eventually just stopped. So we were able to get to him. Hilda wrapped him in a blanket and lifted up his 50-pound body [into the car] and we got him to the vet.” Since most street dogs live an average of three years, the ladies were surprised that the dog with the head tilt appeared to be at least nine. It is believed he belonged to someone and was either let go or got away. He was well fed, clean, and aside from his head tilt and massive ear issue, he was seemingly cared for. The sweet doggo was a good boy at the vet visit, even with the poking and prodding of his ear. The folks named him Tommy, and it was discovered his ear got swollen and infected from an attack by another dog. Altamirano shared with The Dodo, “The head tilt comes from the infection eating away at his nerves, and he also had pockets of puss all over his head, face and neck area. Despite all this, Tommy not once growled.” Tommy will be up for adoption in the United States once he fully recovers. Three cheers for a very happy ending!

Jenn made the daring decision to ring in the new year by donning a glittering black bikini.
Jennifer Aniston’s gorgeous beach attire hasn’
0 155