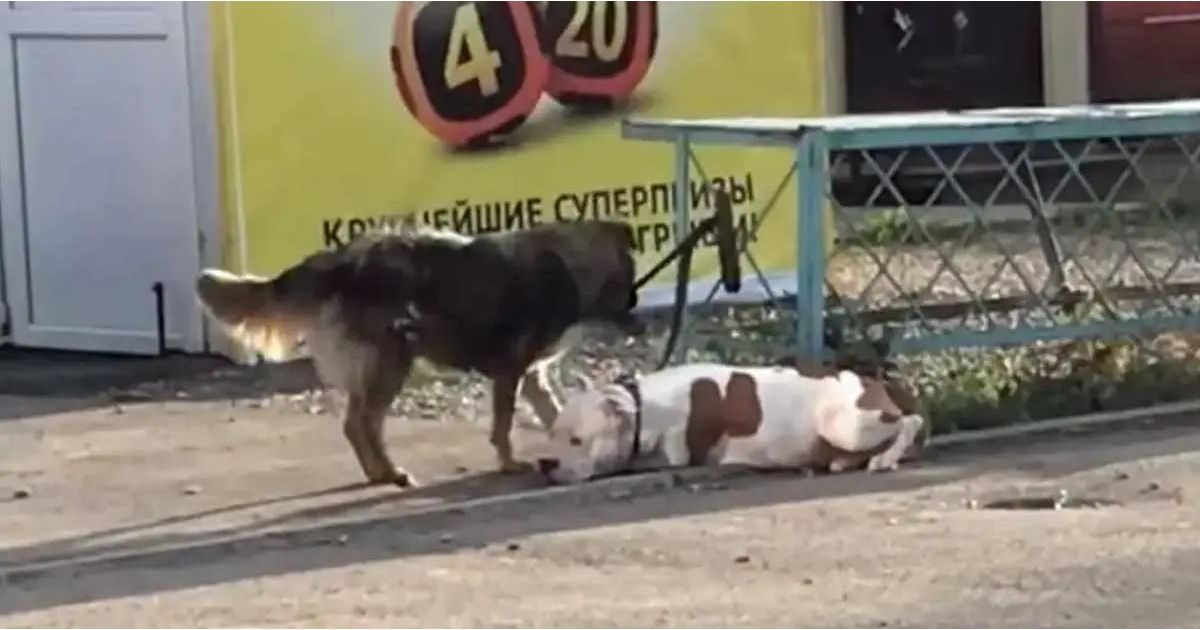 Dmitriy Timchenko, a Russian man, recently witnessed a heartwarming incident that would make dog lovers across the world tear up.

When Dmitriy and his companion entered a store in Novorossiysk, Russia, they saw a spotted pit bull chained up in front.

But someone else was watching.

The dog’s owner left her pet outdoors while she went inside the store to do some shopping. One worried bystander, meanwhile, was unaware of this reality.

A stray dog rushed to his rescue and started untying the pup as soon as he saw him tied up looking lonely. It must have never crossed his mind that the dog was just left to wait for his owner as his owner buys something.

He must’ve felt for him.

The stray may have been concerned that his new buddy had been left behind which is why he acted so quickly to release him. He immediately wore his hero cape and went on to try to save the day.

Once it was untied, he went and snatched the puppy from the leash around his neck and brought the pit bull with him. He tugged and pulled on the knots until they were loose. He wanted to leave the place with him.

He set the pup free.

“I’ve seen this stray dog around town many times. He always uses the crosswalk to cross the street. He’s a very smart dog,” Dmitriy remarked.

Apparently, the stray was not only wise but also good-hearted. Dmitriy and his companion instantly interfered when they saw the dog preparing to go with his new friend before the pit bull was dragged away. Good thing, they knew that the owner was just inside getting something.

They had to do something.

“We went into the store and called the owner on the loudspeaker,” he recalled. “She came outside to get her dog.”

Despite the fact that everything was a complete misunderstanding, the stray dog merely wanted the best for his “abandoned” comrade. Although Dmitriy is unsure of this dog’s origins, he claims that despite having only ever lived on the streets, he appears to be in good health and is doing well.

He doesn’t deserve to be on the streets.

His kind heart and his amazing deed are so heartwarming to see given all the things he could’ve already experienced living on the streets. The life of a stray dog is never easy—they fight for their food and their “shelter” every single day.

No dog deserves to be in this heartbreaking predicament, especially dogs as good-natured as this particular canine. But nevertheless, we are glad to hear that he looks like he’s in a good shape overall.

This puppy needs a home that will love him forever, so perhaps someone with an equally kind heart will want to adopt him.

Hoping for the best for this good boy—he deserves the world!

Check out the video below to witness how the dog set his new buddy free.

Parents of 12 working multiple jobs to support their family get Christmas miracle from stranger
What do you want to get from your Secret Santa?
0 872