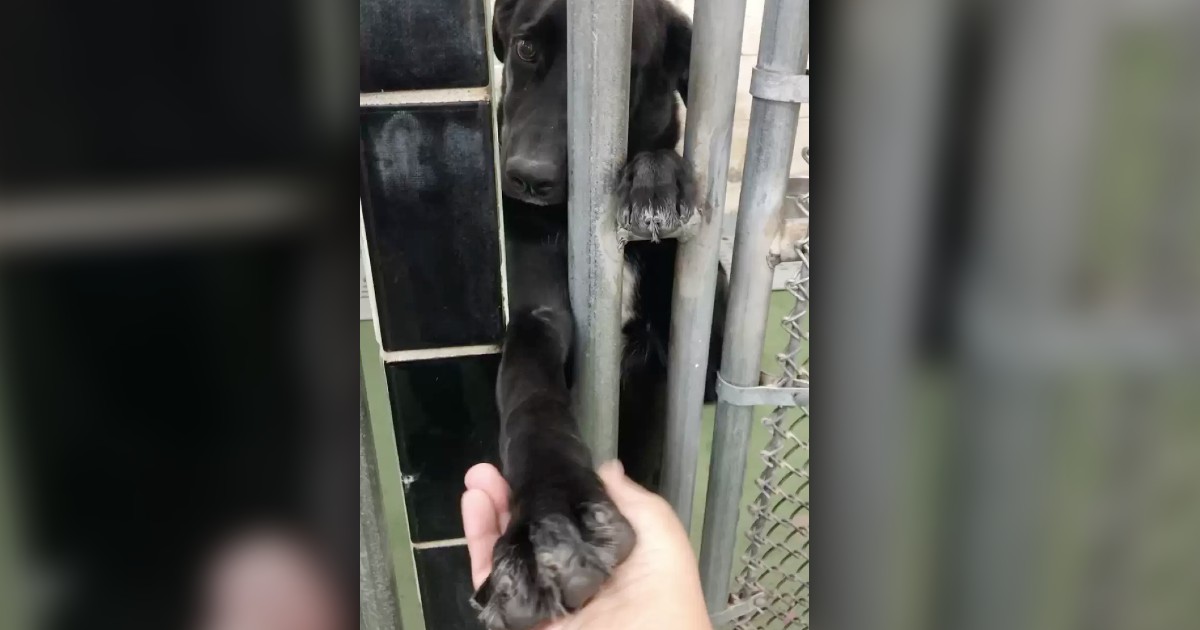 It isn’t known how long Mac had been on the streets of Pasco, Washington, before she was put behind bars.

But she was found by a Good Samaritan and taken to the Tri-Cities Animal Shelter.

Mac, a black Lab mix, just wanted her freedom back and would poke her furry paws through the bars of her cage in the shelter.

She liked reaching out to hold the hands of the people that would walk by.

This captured the heart of many who came into contact with Mac, especially one volunteer in particular.

“She was a favorite of mine and many other volunteers!” Julie Saraceno, a volunteer at the shelter, told The Dodo. “I was hooked on her that first day she pawed at me through her kennel!”

Basically, Mac knew exactly what she was doing. This intelligent doggo knew that she would get attention, and extra treats, when she pawed at people.

And Julie knew that Mac’s adorable tactics to get treats and pets could also help Mac get a new forever home.

So, she took of video of her and Mac holding hands on the dog’s 39th day in the shelter.

That video ended up going viral.

The requests to adopt Mac started pouring in after that. And these requests were coming from all over the place.

A woman ended up driving all the way from Montana just to see if she and Mac were a good match.

They ended up being the perfect match and got along right away.

And just like that, Mac found her forever home. And no one was happier for her than Julie.

There were a lot of other people rooting for Mac too.

“I’m happy to see she was adopted. Both Mac and her owner will have better lives for it,” said one Instagram commenter.

Mac is having a great time in her new home in Montana. She lives on a huge sprawling property with other dogs and even a horse.

Mac couldn’t have looked happier when she was at her new home and immediately jumped up on Julie who was taking the video. There’s no question that Mac seemed very grateful to Julie for helping her to find a home.

“You have unconditional love with Mac. So glad she got adopted, she is adorable. Thank you for taking her,” wrote one Instagram commenter on the video.

“How absolutely wonderful! You’ll always feel her ‘forever grateful’ demeanor. They know when they are saved,” said another.

“Aww, this is beautiful. This family has given this beautiful baby a second chance of happiness,” and another.

Mac ended up spending a total of 65 days in the shelter. She went from living behind bars in a cage to a massive open field where she gets to live her best life and run free with other beautiful creatures. All thanks to Julie’s help.

Check out a video of Mac below!