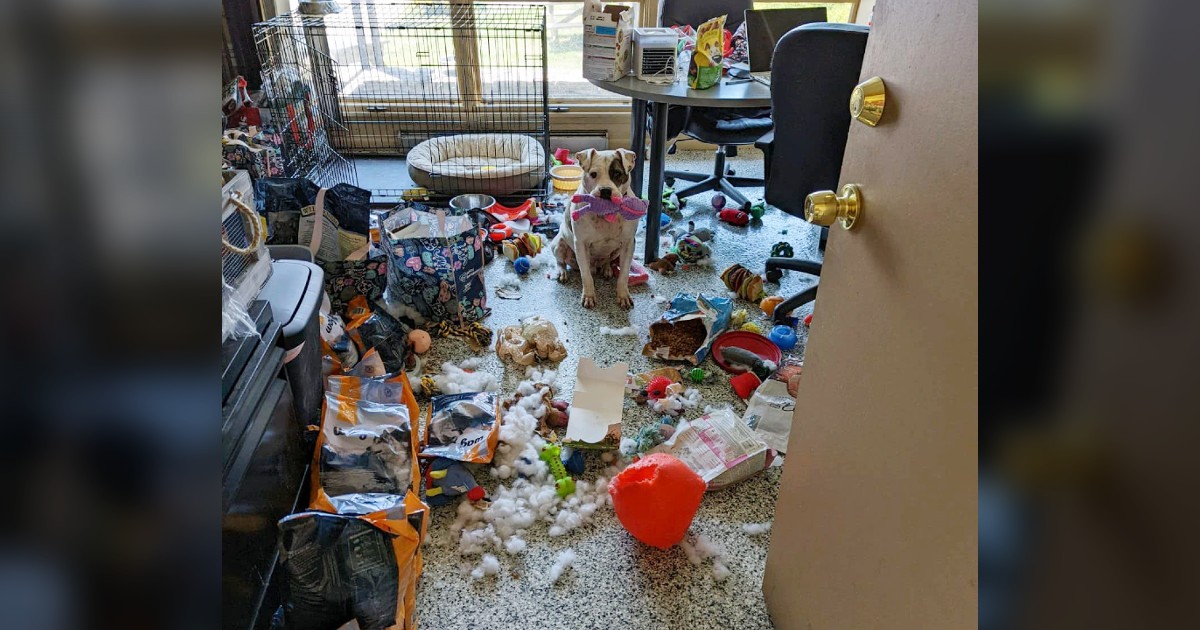 What does one do when you’re stuck in a small space and left alone?

You alchemize the situation into a big party and have the time of your life.

And that’s exactly what shelter dog Damon did when he was left in the shelter’s office.

Damon was brought into Cincinnati Animal CARE and labeled as a “lost dog.” When no one came to pick him up, he was put up for adoption.

Months went by without any requesting to bring this doggo home. But Damon didn’t seem to mind. He had gotten pretty good at making the best of his situation.

The shelter where Damon was living was over capacity.

So, to make room for all the doggos, the shelter staff would let some of the dogs live in their offices.

“He was living in the behavior office, but they needed their space to work with more dogs in need, and he had really bonded with Sydney, our foster specialist,” Ray Anderson, a staff member at Cincinnati Animal CARE, told The Dodo. “So he was living there for a bit!”

Sydney had to attend a meeting and left Damon in her office for about 45 minutes. To Damon, that meant it was party time!

And he threw a doggy rager.

He found every single last toy in that office and played with them. Which meant that he tore them apart and made a huge mess. You would have thought that he spent hours in that room.

“I believe the official number of toys destroyed was ‘all of them,’” Anderson said. “The foster office is loaded with goodies to go home with our foster fams, so he found a cornucopia of fun.”

Damon was pretty proud of himself for throwing such a sweet shindig and was so happy when Sydney got back so she could join the party.

“He was having the time of his life — how could you be mad at that face?” Sydney said.

Little did anyone know that this random act of joy would manifest itself into something that would bust Damon out of the shelter.

Sydney posted a picture of the aftermath of Damon’s “party” on Facebook and Damon’s family ended up seeing it.
They soon came to pick up Damon, and now he’s back home again. So, his big party allowed him to be reunited with his family.

To make up for all the toys that Damon chewed up, the Montgomery County Animal Resource Center sent a heartwarming card and a brand new box of toys.

The kind gesture really meant a lot to the folks at Cincinnati Animal CARE.

“We like to keep a positive vibe as much as possible and try not to get bogged down in what we call ‘Sarah McLachlaning,’ but the reality is running an animal shelter is hard work,” the shelter wrote on Facebook.

“It takes an emotional toll on every single person who works here when you see 8,000 animals come in over the course of a year. And often not in the best condition. Sometimes something as simple as a card and a box of toys can be the difference maker in a rough day and the best day. Thanks again to Montgomery County ARC and all of our great partners who make it the best day.”

So, Damon’s little party wasn’t in vain. It got him home to his family and got some love and support for Cincinnati Animal CARE for all their hard work.

Check out another adorable shelter toy party in the video below!