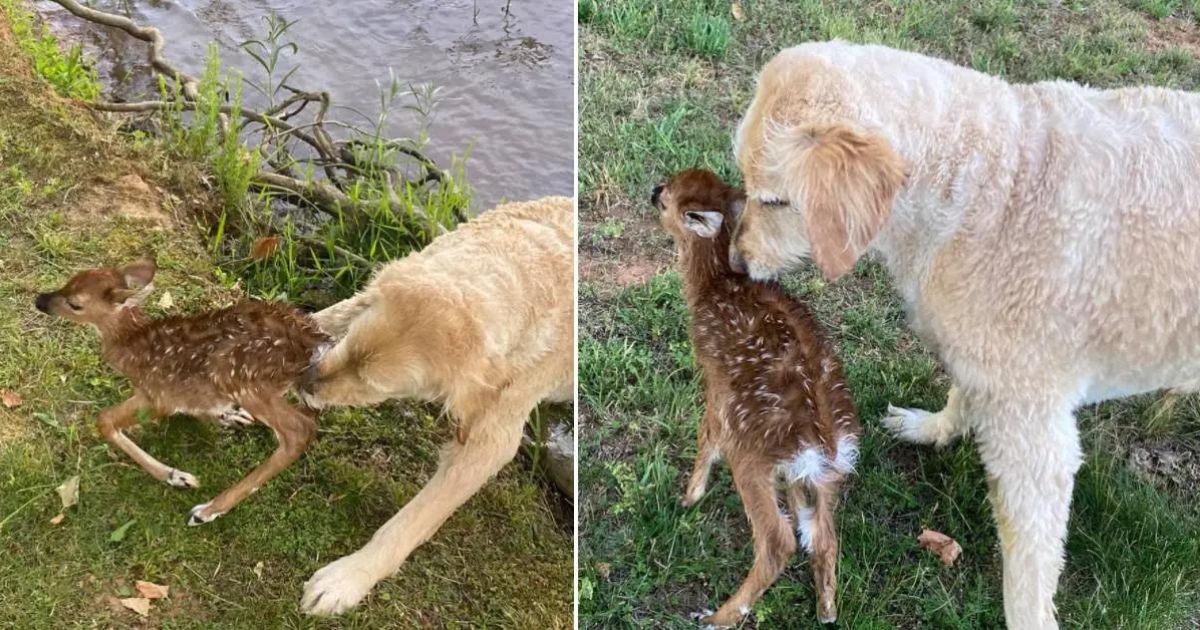 Ralph Dorn of Virginia looks after a Goldendoodle named Harley.

One evening, Harley the Goldendoodle was nowhere to be seen. Naturally, Ralph wondered where he went.

It was the 2nd of June by the lake, and the dog had clearly ventured out somewhere far. The lake by their home was vast and provided a lot of opportunities for an adventurous dog.

Pretty soon, Ralph saw Harley on the lake. And the dog wasn’t alone.

Harley proved quite the swimmer – owing to his retriever DNA. Retriever breeds and mixes just can’t shake off their love for water, it would seem.

Harley was in the middle of the lake paddling beside a baby deer that almost drowned.

The Goldendoodle paddled along, helping keep the troubled fawn above water. This might be the fawn’s first ever swimming lesson, if you think about it.

And the fawn was lucky that Harley was there. With a lake this large, there’s never a guarantee that a friendly dog will come by to save you.

Harley then brought the baby deer to their lawn and began licking and caring for it.

As if to go “I met you while saving your life, so we’re friends now”, Harley would not leave the fawn alone. He seemed determined to stay with it.

This of course was no option, as the fawn’s mother was around and waiting to be reunited with her baby. You might have saved its life, Harley, but you’re no deer!

Around came the doe looking for her baby. She’d followed the fawn’s bleats to Dorn’s yard.

Dorn saw everything. Now, he knew the mother would take it from here. He led Harley indoors and left the fawn outside for its mother to fetch.

Being the cautious mother it was, the doe waited till Dorn and Harley were out of sight before she left with the fawn.

When the morning of the next day came, Dorn noticed Harley impatiently running from window to window. Something exciting was outside, and Dorn opened the front door to see what it was.

As Harley ran for the tree line, Dorn heard the bleating of a fawn.

The fawn from yesterday came back, and it seems like it returned to say thank you.

Doesn’t that sound right out of an old Disney movie?

They touched noses, nuzzled, and had one last moment before the fawn would leave for good. Goodbye, friend!

Being a certified therapy dog, helping and comforting are what Harley does best. Thanks to those two skills, he made a friend and gave us this adorable story to read about.

Harley usually works with human children – such as Dorn’s grandkids.

But the love and protectiveness of a dog seems to be a universal language.

Neither Harley nor Ralph Dorn know where that fawn and its mother are now. The fawn was just a few days old when this happened, Dorn estimates.

Over 100,000 people reacted lovingly to the story that Dorn shared on Facebook.

There’s always room for more eyes to read about this story. Kindly share this article with more people so they can read about it too!