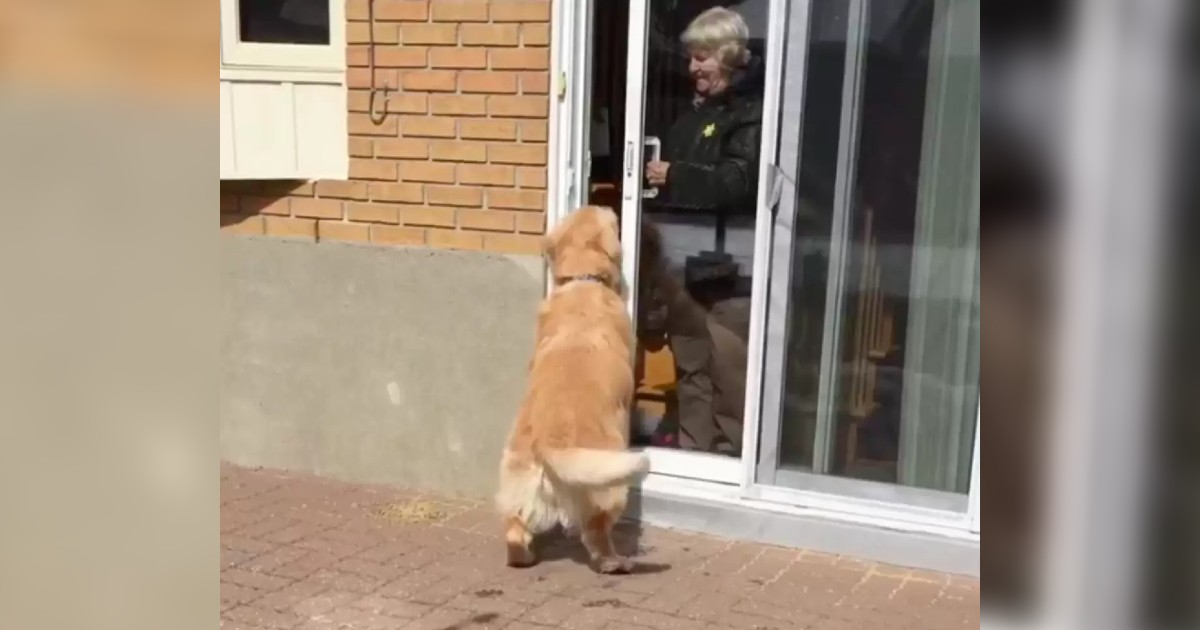 Whenever 15-year-old Cheddar the golden retriever sees his favorite person, he loses it.

He goes crazy with excitement and delight. He always wants to be with his favorite person.

But his favorite person isn’t his human mom or dad or anyone else in his family.

This senior dog’s favorite person is his neighbor Jean.

“He just loves her and I can’t explain why. I really don’t know,” says Cheddar’s mom Shelley Vassall.

“We started going to see her just about every single day. How he took to her, I mean, it was instantaneous. She babysits when we need a babysitter. When we leave her house he just wants to stay there.”

Vassall heard about a large golden retriever who was going to be given up so she offered to foster him.

Her family was concerned about getting at attached to the 8-year-old senior dog.

As senior dogs tend to be around for a shorter period than a younger dog would be. But two days after the family fostered Cheddar, they agreed to adopt him.

“When we met Cheddar that kind of all went out the window. Even my husband’s like I know he’s about to turn 8, but it didn’t matter. It was about Cheddar it wasn’t about his age. He’s a big dog. Cheddar’s just beautiful. He has a beautiful personality,” says Vassall.

Cheddar was on the shy side when he was first adopted. He wouldn’t play with toys and didn’t really want anything.

Then he met Jean and everything changed.

Cheddar will even take himself on walks to Jean’s house.

He carries his own leash in his mouth.

He will often make himself at home at her house and jump right up on her outdoor couch to snuggle up with her.

“She’s helped him so much. I think it’s given him more confidence,” Vassall said. “He can be very timid and sort of afraid of his own shadow. But he’s quite bold when he goes over there.”

Cheddar is also a fan of his family’s cleaning lady, Cheryl.

“There are wounds that come out of him that we have never heard him make before,” Vassall says. “It almost sounds like he’s in pain, he’s so happy.”

But Cheryl is no Jean when it comes to Cheddar.

“It’s just about her [Jean]. He just wants to be with her. She’s his favorite who now has become our friend,” Vassall says. “All dogs are special and Cheddar is just that. If he was a human being, he would be just really kind. He’s the most gentle soul. It’s just a joy to be around him.”

More than 2 million people have watched Cheddar’s story on YouTube. It’s so sweet to see Cheddar and Jean’s friendship.