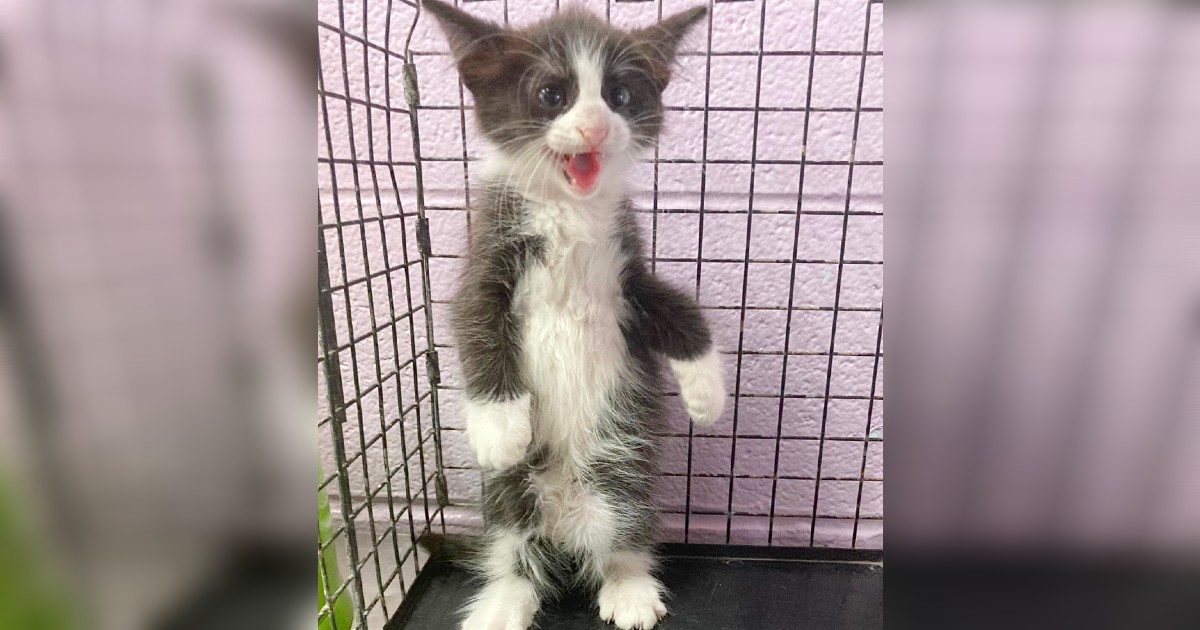 When looking for pets to adopt, we always want to get one that’s already at least trained with the basics, like potty training. We also look for a pet that could behave around our space, whether it’s an apartment or an entire house or whether we have kids or other pets.

However, not all animals in the shelter come in trained or well-mannered. At times, there are rescued pets who are less friendly because of various reasons. They may be scared or intimidated by their new environment, or it could be past traumas around humans and other animals.

Some animals in shelters have a bit of an attitude. Maybe they’re just not used to being touched or petted most of the time. Some don’t even like people coming in and out, trying to reach out to them in their kennel.

This could be a problem if they show that kind of attitude and discourage being adopted. However, this story is the antithesis of that. One cat who got the sassiest attitude got adopted because of it.

This is a picture you can hear! It speaks of loud meowing or hissing. This is Spicy Chicken Nugget – and we bet the name speaks for itself.

He is not like other animals in the shelter. He won’t give you those round, adorable eyes to win you over. Instead, he shows his true colors and all that sassiness – and it worried the shelter for quite some time until they posted this on Facebook.

Humane Society of Harlingen thought it would be funny and witty to post this photo of Spicy Chicken Nugget and all his sassiness. But the people loved how they wrote the caption that embodied what this cat would be like if it were a human talking.

Some of the fun parts in the post included:

“I should probably let you know right away that I hate everything. That’s right, hoomans; hate ’em; toys, ain’t got time. Snuggles? Barf. Head scritches? Don’t touch me. You want to pick me up? I’m a black belt in karate.”

But it’s not all hate and violence for this viral feline. He also said that he loved a few things, like food (of course!), a warm bed, and some peace and quiet. He thought he deserved that.

You would think that this attitude won’t pass any human. However, that was what the people loved about dear ol’ Spicy Chicken Nugget. They had fun reading that in a cute yet angry cat’s voice.

The post also got the attention of a potential adopter who reached out to the Human Society of Harlingen immediately. It seemed like being true to oneself was a better way to get accepted by hoomans around.

Furever home that he deserved

In less than 24 hours, Spicy Chicken Nugget was adopted and officially signed off from sassy cat duties in the shelter. Even his adoption post did not let go of that spicy character. And although he said he hated a lot of things, he parted ways with the shelter in his dear fans, saying:

“I’m finally getting my kingdom with my forever hooman today. I know I said I hated everything but this isn’t so bad. I kinda like her. DON’T tell anyone!”