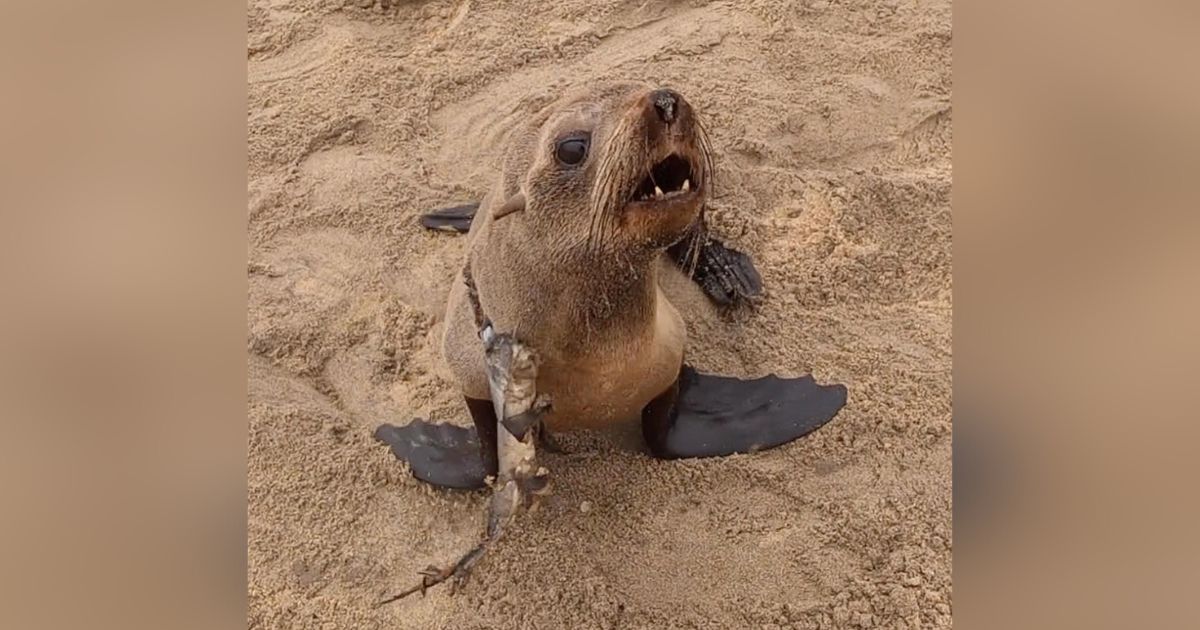 About a year ago, Namibia was suffering from a mass seal die-off. Thousands of seals of varying age groups were dying on the shore.

What they knew though was that it was starvation that was killing these poor animals.

They were desperately searching for food and one of those available for them to consume was the St. Joseph’s shark.

Sometimes, the food bites back.

One rescue operation found 2 seals with spikes on the neck.

Naude and Denzil of Ocean Conservation Namibia rescued the injured seals. One of them had a spike weirdly sticking out of its neck.

At that time, they thought they were pieces of wood or maybe stingray spikes.

However, this encounter helped them discover the real reason behind the spikes. What they thought was a normal rescue gave them the answers they needed.

It was a St. Joseph’s shark.

And it was still hanging from the neck of the seal.

The young male cape even had a whole fish still with him.

The St. Joseph shark, aka the Cape elephantfish, is a true chimera—a member of a primitive fish subclass that split off before many of the characteristics we associate with sharks emerged.

It is neither a shark nor a bony fish. The St. Joseph shark has some notably peculiar traits as a result of this and they resemble the ratfish found in the United States.

They are mostly found in the shallow seas of the Western Cape, although they may also be found in Namibia and the Eastern Cape.

Despite popular belief, chimeras are actually rather abundant.

The St. Joseph shark is the only common shallow-water species since most chimeras are found in deep-water habitats.

Their barbs are gnarly.

They have large barbs sticking out of their dorsal fin.

These are poisonous barbs and these are what’s getting stuck in the seals.

The fur seals don’t typically pursue this species of fish, but they are becoming desperate due to the massive starvation of seals that was recently experienced.

The seals are “spiked” while the sharks are being cut up into bite-sized pieces on the surface, and frequently break off and remain there due to the one-way barbs on those spikes.

The seals were desperate for food.

As the rescuers got close to the seal, it was evident that the suffering animal was restless. The poor thing must have been in incredible pain.

“So we found the culprit. We found what we thought were stingray barbs. We had two in the last week thinking that it’s stingray barbs. This is St. Joseph’s shark,” one rescuer said.

They immediately removed the spike. Then, they rescued another. This cape had a cut on his chest from a thin pitching line. Rescuers again took it out to free the seal.

Then, they went to show the shark once again.

“It’s a long sharp barb on his head and not the normal prey for seals. But obviously with them being so hungry, the big starvation at the moment, they’re going for whatever they can get,” Naude explained. “And obviously you can see the bite marks. They grab the fish, shake it around. As he grabbed it and shake it around, it pricked him in the throat.”