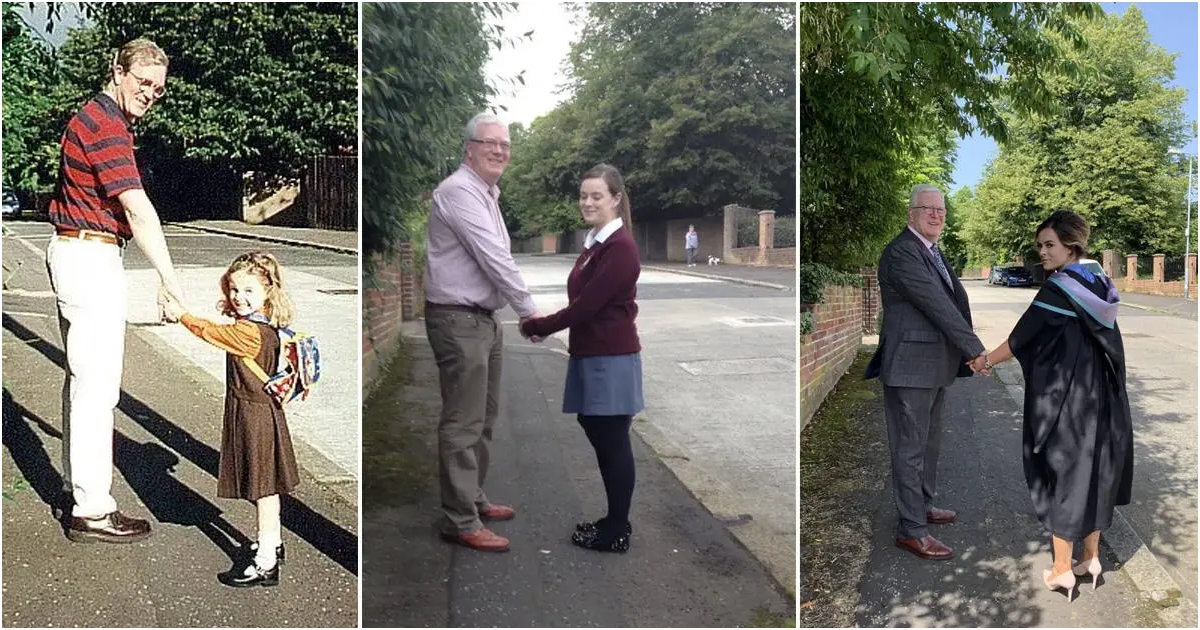 An image speaks a thousand words.

We are forever thankful for the invention of the camera, if not because of them, we wouldn’t be able to immortalize precious moments and milestones in our lives like birthdays, graduations, weddings, and anniversaries.

The evolution of cameras has gone far, beyond, and advanced. Now, professional photographers can already capture images of objects that are miles away from you.

However, some people use the camera to simply capture important moments involving their loved ones.

Take this dad from Belfast in Northern Ireland as an example.

One day, Niamh’s dad, Ciarán Shannon, decided to show the world how proud he was of his daughter. He took to his Twitter account and shared three photos of his lovely daughter showing different stages of her academic life.

It was his simple entry into the famous trend “How it Started. How it’s going.”

He wasn’t ready for what happened next.

His only intention was to show how proud he was of his daughter, little did he know, that his simple social media post will crack the internet.

“I’ve just been watching the numbers go up and up,” he told BBC. “It’s like watching the electric meter when the tumble dryer is on.”

“I’m flabbergasted by the reaction my pictures have got,” he added. “The good thing is that now nearly a million people know how proud I am of my daughter.”

The three images show Ciarán and Niamh holding hands while posing in front of their home, it was the same spot but in different eras.

The oldest photo was taken during Niamh’s first day at St. Therese of Lisieux Primary School in September 1999. The second was on her last day at school in May 2013, and the last photo was taken in the summer of 2018 during her university graduation.

“I don’t know either of you, but you’ve made my day. Thank you,” Twitter user @DecPierce wrote.

While Twitter user @LeeMFraser commented, “What a lovely slice of history! As a dad I’ve realised, like us all, that time is quicker for younger people, yet all moments are precious! A great reminder of points in time! Thank you for sharing.”

“Such a beautiful record of milestones. You are very lucky to have that relationship. Thanks for putting this out there on what is quite a depressing day for me,” said Twitter user @nutbrittles.

Apart from their precious photos being framed and displayed at home, they’re now being seen by countless online people around the globe. There is now a restriction on Ciarán’s Tweets, but as far as numbers are concerned, the father-daughter pictures were able to gain over 88.6K retweets and 948.9K likes!

Niamh is now a math and science teacher, of course, Ciarán couldn’t be more proud of what his daughter has achieved in life.

The “How It Started, How It’s Going,” trend is still alive and people, particularly families, are now more creative in recreating their unforgettable moments from the past.

Parents of 12 working multiple jobs to support their family get Christmas miracle from stranger
What do you want to get from your Secret Santa?
0 881