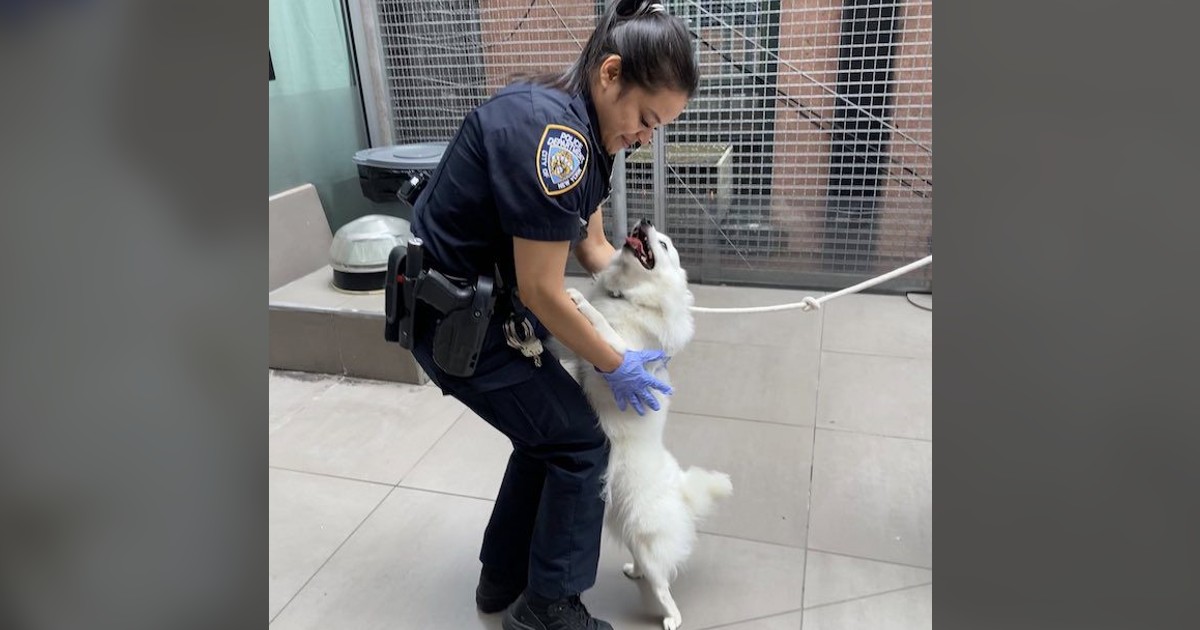 In June, it was 80 degrees Fahrenheit (26 degrees Celsius) when concerned citizens called 911 to report a dog had reportedly been left in a car with the windows closed for a number of hours.

If it’s 80 degrees outdoors, a car’s inside temperature will reach 99 degrees in just 10 minutes, and that can be incredibly fatal!

The poor dog was struggling with the heat.

In response to the call, several officers arrived and smashed the car’s window to liberate the dog. The fluffy white puppy was eager to exit the car, and Officer Aruna Maharaj assisted in freeing it. The weary puppy was given food and water by the people who were there.

The video of the dog’s rescue was tweeted by the NYPD 19th Precinct. The post said, “Hot car, hot dog rescue—thanks to caring NYers who saw this pup locked in a car for over 2 hours & called 911. Our cops responded discovering the car off, windows shut & distressed dog.”

They also said a criminal investigation is in place.

“Yesterday’s afternoon temps hovered in the mid-80s & on an 85° day, it only takes 10 mins for the inside of a car to reach a deadly 102°!” the post continued. “It’s prohibited to leave an animal unattended in a car under these dangerous conditions—thankfully the pup was rescued & is being cared for.”

The dog’s 26-year-old male owner was reportedly charged with animal cruelty, according to the NYPD.

This cruelty is truly unacceptable.

Officer Maharaj developed an immediate affection for the puppy during the rescue. The dog first visited a vet clinic before being taken to the American Society for the Prevention of Cruelty to Animals (APSCA).

Because she made the decision to adopt the cute puppy a month later, Officer Maharaj must have kept an eye on him. He was adopted by the New York Police Officer who assisted in saving him.

“A month ago, this sweet doggo was rescued after his owner left him in his hot locked car for hours; yesterday, one of its rescuers, Officer Maharaj, adopted him! Thank you @APSCA for taking such good care of this lucky pup,” the NYPD 19th Precinct shared in a tweet.

An adorable photo of Officer and Maharaj and the dog happily meeting each other on his “Gotcha day” was shared by the precinct as well. The furbaby looks so joyful finally being in the arms of his new human.

He must’ve remembered that she saved him.

With how Officer Maharaj saw how the dog was treated so poorly, we can only imagine how good she’s going to treat him. It’s a huge sigh of relief to know that he has now found a home where he will be loved and cared for like no other.

Kudos to Officer Maharaj and the NYPD 19th Precinct for the successful rescue and for giving this boy a new chance at life!